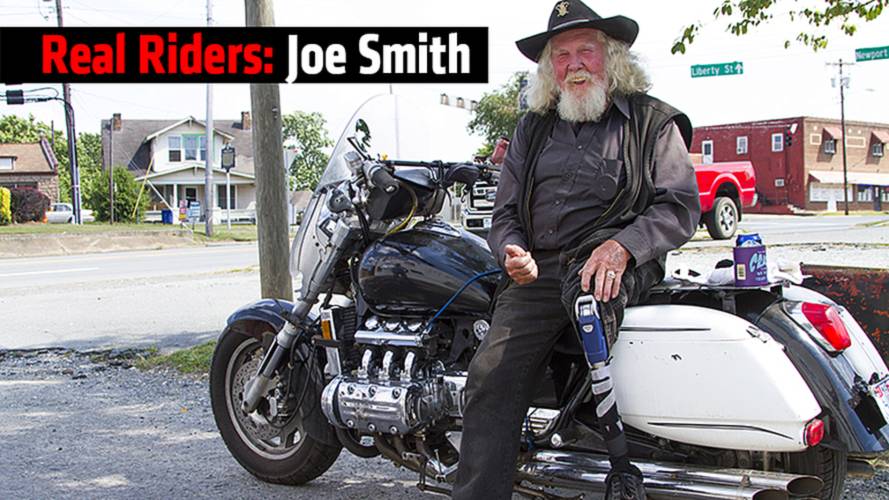 Nearly all 50 US States, parts of Canada and plenty of lonely roads, real rider Joe Smith leaves his mark nearly everywhere and has become a one-legged icon.

His long white hair tucks underneath his black, perfectly worn cowboy hat. His mustache folds into a full white beard, the only thing you can see past all the hair is his grin. Joe Smith was my grandfather’s best friend and a Real Rider.

I was 16 years old when I made my maiden road trip on the first motorcycle I ever built. I had saved up from mowing lawns every summer since I was eight. It was Myrtle Beach Bike Week with my dad. A small, worn-down North Carolina service station sat on a corner of two one-lane highways on the outskirts of Rockingham, North Carolina--our halfway point, we had usually flipped onto reserve a few miles before. I walked inside to use the restroom and I looked up to see Joe Smith written in distinct font. Smith has been to every state in the US, and some providences in Canada, at least once and most more than twice. Every place he stops, he leaves his signature by writing his name at the top of the bathroom wall. It’s a silly and weird thing to do, but throughout my life as I saw it in different states and rest stops, it reminded me of who had come before me.

Joe has been to Sturgis 41 times…consecutively. He and my grandfather went for their first time around ’73 and Joe never stopped going. “There's more to see within a 100-mile radius than anywhere else in the US," said Smith about Sturgis, South Dakota. "Sturgis ain't more than Main Street Daytona. It's what's all around it that counts."

This year he plans on riding to a town just outside of the rally and pass through on his way into Northern California via California 20, then the coast and finally Los Angeles, before making his way back to North Carolina. He's made that trip several times.

Smith lost his leg in a motorcycle accident when a couple ran a stop sign and T-boned him on his bike. It was amputated above the knee, and although he has a prosthetic (a kick ass one at that), he isn't supposed to ride two wheelers. After the accident, he quickly became the local expert on three wheelers. His house is littered with almost a dozen Harley-Davidson Servi-Car, homemade or side-car frames along with almost eleven complete trikes. He's collected more parts and bikes than anyone I've ever met. All too often I hear him say, "Well, that's just too good of a deal to pass up". Walking through his house he complains of the junk he has collected, but it’s a treasure chest of weirdo, vintage and hard-to-find bike parts.

He's become a legend in the small town of Winston-Salem, NC. Everyone knows Joe from cruise nights or the local bar and always stops to hear a joke or story of his latest trip. Along with my grandfather he was one of the members of the Winston-Salem Jokers Motorcycle Club.

We met Smith at Willie's Honk Tonk bar in Winston-Salem, where he was waiting on one of his trikes to be delivered. It was a custom bike with extreme rake and a 124ci S&S V-twin built by Kendall Johnson Customs. He let a friend ride it who mixed up the air-shifter, burning up the clutch in the process.

Smith had ridden his 1997 Valkyrie 1500 with custom sidecar to the bar. If you think sidecars are made for leisure riding or lazy riders, Smith will prove you wrong. With only 50,000 miles on this bike he had a few homemade amenities.

Smith’s left leg is prosthetic, so using a standard gear shifter is difficult. Instead he made a linkage that moves the controls to the right peg. Press with his right heel for an upshift and toe to downshift. The rear brake is in the factory mounting place in front of the controls. On the left side he made a new peg to mount his prosthesis into while riding.

Smith found a vintage Pop Dreyer sidecar that you'd normally find on a BMW. It originally used a torsion bar to add spring for the passenger’s comfort. He solid mounted it because it rarely sees passengers and it shifted weight around while riding. "I ought to have my ass kicked for doing that," said Smith about altering a rare sidecar. The horns came from a friend in South Dakota.

Since there won't be any leaning of the bike he opted for a car tire to get three times the mileage. Also a car tire is designed to slide, not lean, which is what you would prefer when riding a sidecar too hard into a corner.

With a three-wheel motorcycle, rake is important in keeping the front wheel in place for high speeds and cornering, so Smith added 8-degree triple trees. He built a mount and snagged a shock like used on an SUV’s hatch to help stabilize the front end.

Here's a really interesting trick: Behind the rear seat of the sidecar is a gas tank. Solid mounted, it runs on an auto-parts store electric fuel pump wired to a toggle switch. The hose is tapped off onto a plug on the handlebars. On long trips, Smith opens the tank, which he mounted an extra key into, lays the hose in and turns on the switch. Probably dangerous, he is no longer worried about the lack of gas stations on long, less traveled roads.

So next time you're using the bathroom in a desolate gas station in the middle of nowhere, look up at the wall and see if Smith had been there before. Chances are he’s been there twice.

If you’ve ever seen his name written anywhere, please email me (Jesse@RideApart.com) or comment in the comment section below.