How To Ride a Sidecar 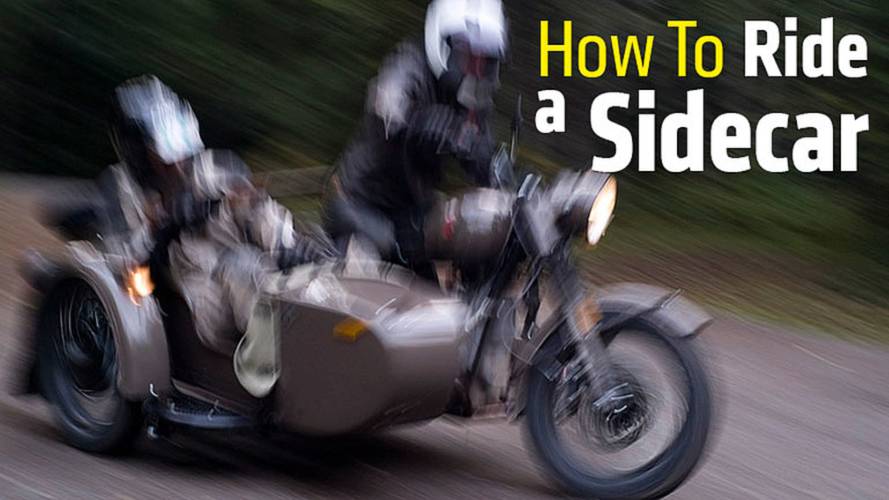 Not a motorcycle or a car, a sidecar is an entirely different requiring a specific set of skills. Learn how to ride a sidecar here.

Not a motorcycle and not a car, a sidecar is an entirely different vehicle to either, requiring a specific set of skills equal to that of learning how to ride or drive. Luckily for you, we’ve put in the hard work figuring it out, so you don’t have to. This is how to ride a sidecar.

1. Steer with the throttle

With the sidecar mounted on the right side of the bike, handling is totally different depending on which way you’re turning. To steer right, open the throttle. That has the effect of lifting the rear and tilting the entire contraption down towards the front right, where the front right wheel “should” be. Want to go left? Close the throttle, this acts a bit like a differential, allowing the rear wheel to spin slower than the sidecars, which is traveling in a wider circle.

2. Steer where you want to go

Unlike a motorcycle, you turn the handlebars in your chosen direction of travel. Turn right to go right.

3. Try and go in a straight line

With three wheels sitting on odd planes, the sidecar does not want to travel in a straight line. As you can see above, giving it gas makes it steer right, lifting off makes it want to go left. You’ll need to keep both hands on the bars and make a conscious effort to track a straight line. Just like riding a bike, looking far ahead, where you want to go, will help you subconsciously do this. Just prepare for a sore back after a ride due to the constant pulling effort you’ll be applying through both arms.

Using the throttle-on method you learned above, approach right hand corners slowly while shifting as much of your body weight as possible over the sidecar. Ballast helps here. Throw a couple sandbags, a tool chest, your dog, girlfriend or anything else heavy into the sidecar to help keep it planted in right hand corners. As you turn in, get on the throttle to initiate the turn and look through the corner to where you want to go. As you begin to “fly the chair” avoid tightening your line further. It’s totally normal for it to come off the ground at speed, but you should be able to control its angle of dangle by setting a nice, predictable, constant radius through the corner.

Enter fast and throttle off as you turn in, this will force the whole rig to steer left. As the bike turns, it’ll push against the sidecar, allowing surprisingly high cornering speeds. You shouldn’t need to hang off, but doing so will ultimately aid traction a little bit. Left handers are the easiest in which to initiate a slide, just downshift as you enter to break the rear loose.

Continue Reading: How To Ride a Sidecar >>

Like a motorcycle, the front brake is operated through the right hand lever and the rear brakes work via the right foot lever. Just in this case, there’s two rear brakes. You don’t need to over think this, just use the front and rear as you would on a regular motorcycle, it’s the front that provides most of the stopping power.

A notable exception is in snow or other low traction situations, in which the front will easily lock, but the rear may have some stopping power remaining thanks to the extra weight over those wheels. FYI - You do lose steering when you lock the front wheel, that’s something to keep in mind.

To engage reverse on a Ural, the only manufacturer of sidecars, find neutral, then reach down to the lever immediately behind your right heel. With the clutch pulled in, push the lever backwards, then use the gas and clutch to pull away just as you would in 1st gear.

You’re only going to need this to get you unstuck. Don’t leave 2WD engaged on pavement or other firm surfaces, the differential locks in 2WD, forcing the wheels to spin at the same speed. As on an ATV, this can lead to dangerous instability in high-traction situations.

With the bike at a complete stop, grasp the lever on top of the driveshaft and wiggle the handlebars to move the coupler as you move the lever rearwards. It’ll slide into a detent and, voila, nothing in the world will prevent you from moving forward. Deep snow, slick mud, a steep slope, no matter what, you’re driving.

To steer while in 2WD, you’ll need to initiate a slide, but this becomes very easy simply by rolling on the throttle or dropping a gear.

Riding in feet-deep snow? Use the front tire like a rudder. You’ll still turn left to go left, but instead of traditional steering, you’ll need to wait for snow to build up in front of the turned wheel, pushing it backwards and turning the bike with it. So throttle on to help that process along, no matter which direction you’re going.

About to flip? Steer left to open your turning radius and ride it out. You obviously don’t want to turn into a lane of oncoming traffic or into a moving obstacle, so you really need to plan your actions far ahead on a sidecar. The best defense is a good offense.

Sound complicated? It is, but with some practice you’ll be able to hustle a sidecar around just as well as your car or bike. How long did it take you to learn to ride? Budget that amount of time and effort into operating a sidecar. Why bother? Imagine a Willy’s Jeep with more off-road ability, much smaller dimensions and a tighter turning circle. If that sounds appealing, then it’s well worth the effort.

Have you ridden a sidecar? What did you think?