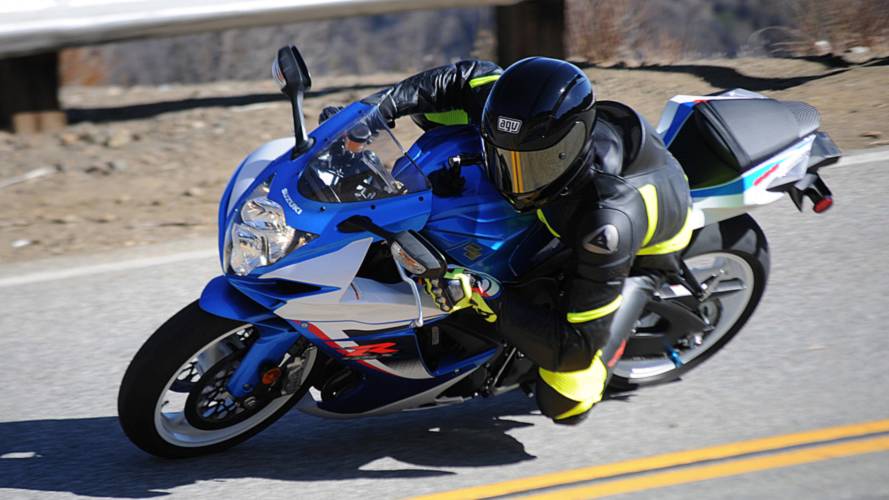 Without traction control, ABS or ride-by-wired, can the GSX-R keep up? Find out in this 2014 Suzuki GSX-R600 review.

No traction control, no ABS, no ride-by-wire. This is a pure, old-school performance bike.

Back in 2011, the GSX-R600 shed 20 lbs of weight and gained both Showa BPF forks and Brembo-branded radial brake calipers. Controversially, it also lost its projector beam headlight in favor of traditional halogen reflector.

Those updates came to a model that was last all-new in 2006. You know, back when companies like Suzuki actually sold sportbikes in huge volumes, the market was hyper competitive and R&D departments were rolling out model updates every two years and all-new bikes every four. With motorcycle sales at a 10-year low and sales of middleweight sport models like this in the can, development as come to a total halt worldwide. The Yamaha R6 also hails back to 2006 and the Honda CBR600RR and Kawasaki ZX-6R (albeit with a larger motor, TC and ABS last year) to 2007. The only all-new model in the segment releases last year was the 2013 Triumph Daytona 675. A smaller company than the Big Four, Triumph's development cycles are longer and the only reason that bike is new is because they committed to it before the bottom fell out of the bike market in 2008.

So, in 2006, the GSX-R got a new frame and motor and that package basically continues to this day. That means a 599cc inline-four that revs to over 15,000 rpm while producing 126 bhp and 51 lb.-ft. of torque. It also packs a slipper clutch, electronic steering damper and selectable power delivery modes.

So far so good, but it's worth mentioning that the GSX-R600 uses the same smoke-and-mirrors approach to the brakes as the current GSX-R1000 and Hayabusa: fancy calipers handicapped by rubber lines and a non-radial master cylinder. Bling, not bang.

It's a 600. It's light, sharp and very, very fast. American consumers tend to think of these things as somehow lesser than literbikes, but that's more out of our own insecurities than it is a reality. In that, 600s are the expert's choice, delivering a very fast motorcycle that just inherently flatters your riding without the need for traction control or ride-by-wire to manage what's simply too much power coming from 1,000cc bikes these days.

Of course, the GSX-R's responsiveness, rider friendliness, smoothness and suspension quality works equally well in town as it does in the mountains. Ergonomics aside, you won't find better all-around bikes with sport capabilities than 600s. That's why so many riders who only have the budget for one bike opt for one of these, they're simply good at everything, but most of all giving you the feeling of riding a badass performance bike.

In 2011, the GSX-R600 was also fitted with closer internal gear ratios (but the same final drive), which drastically improve mid-range performance. The GSX-R's engine is powerful and exploitable from 10,000 rpm on up, but as a result lacks that very tight powerband which defines bikes like the R6. Also notable is the generous overrun; with max power arriving at 13,500 rpm, you get more than 1,500 rpm to grab the next gear. Combined with class-leading power, it's the friendly nature of this engine that most separates it from other players in the 600 class. The ones that don't cheat, anyways.

After spending much time on liter bikes and 1,200cc twins — we ride those a lot because there's been new ones we've needed to cover — it's refreshing how agile and neutral the GSX-R600's handling is. Steering is uncorrupted by too-wide rubber or a too-long wheelbase (20mm shorter for 2011 on), so the GSX-R is free to just go where you point it, when you point it that way. It's also able to remain stable at lean, even with a big handful of throttle or while pushing it hard into a corner on the brakes; feel is clear under all conditions.

Unlike the heavier Hayabusa or more powerful GSX-R1000, the limited brake spec isn't such a handicap on the 412 lbs (wet) 600. Again, the inherent rightness of low weight and sharp geometry outweighs actual mechanical spec. The 600's lever doesn't come back to the handlebar because it doesn't have to stop 586 lbs or 180 bhp.

Away from the mountains, comfort is surprisingly strong. With it's soft seat, adjustable rearsets, relatively tall clip-ons and relatively generous cockpit proportions, we'd rank the GSX-R a close second to the CBR on comfort.

Surprisingly strong, useful mid-range makes the engine feel larger than it is.

Light and agile, this is as sport-focussed as a motorcycle can get.

But it doesn't sacrifice day-to-day utility in favor of laser-like sport focus. If you can only afford one bike and want a sportbike, this would be a solid option. It's as at home splitting tight city traffic as it is dragging knee on The Snake.

The headlight, despite the de-spec from projector to reflector, is very bright, providing excellent nighttime illumination and waking up dozy automotive drivers.

The tall windscreen provides excellent wind protection. There's a lesser need to fit a taller item than on other 600s, but you will still probably need to.

The entire package is cohesive and flatters your riding. Whether you're an expert looking for the sharpest tool in the box or a newer rider looking to upgrade from a 650 twin or similar to your first full-on sportbike, the GSX-R600 is a solid option.

Unlike the Triumph or the Kawasaki, the GSX-R lacks a defining USP. It's not a triple, it doesn't wear Ohlins or genuine Brembo brakes or come equipped with TC and ABS. It's just an inline-four. One which, on paper, is just too similar to its rivals to stand out.

"Brembo" brake calipers add bling, but don't be confused, they're not as good as the Monoblocs on the Triumph.

The Gixxer image is just plain bad. Friends will ask, "Really?" Cops will point their radar guns at you. It's as if you gain a helmet mohawk every time you climb on it.

The standard-fit Bridgestone BT-016s are not good. They don't work in the wet or in temperatures below about 60 degrees. At all. In dry, warm conditions they're sportbike tires, but not even particularly good ones. We'd love to see Suzuki fit high quality Dunlop or Pirellis as standard. This is an awesome sportbike, massively held back by cheap tires.

The GSX-R600 costs $11,699 in 2014. A competitive price, but no one's paying cash for a Suzuki. You buy one because they have the best 0% APR deal in the business. If you have a job, putting one of these in your garage is as easy as it gets.

As good as a sportbike gets, with low running costs, generous financing and silly levels of performance. That's the winning formula that has historically made these things so popular. But, that popularity is also the GSX-Rs biggest problem. Riding one simply does not bring the same cache as does riding a Triumph or any similar bike which comes in solid colors and without legions of squids tarnishing its image.