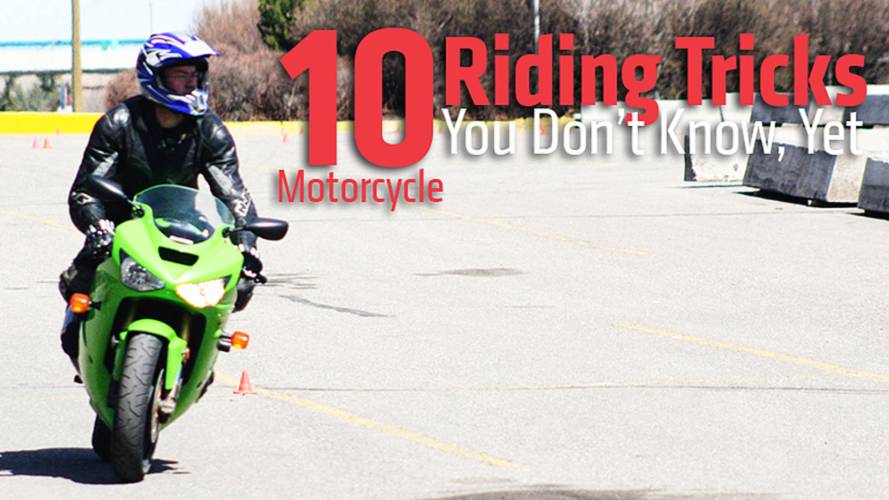 Here are 10 handy little motorcycle riding tricks that will make you smoother, safer and, in some cases, faster. They'll work on any bike, any time, whether you're cruising, tearing up a mountain road or heading out around the world.

In Traffic, Drag Your Back Brake For Better Balance

Picking your way through traffic at low speed is one of the hardest things we have to do as riders. Managing a heavy, unwieldy motorcycle while watching out for drivers and trying to figure out if your 'bars are going to fit between those mirrors (You do lane-split, right?) requires complete attention, strong situational awareness, good hand-eye coordination and, sometimes, an extraordinary sense of balance. We can’t help you with the first three, but here’s a trick that’ll help make threading through cars less like walking a tightrope: drag a little back brake.

Doing so smooths out power delivery and preps you for emergency stops, of course, but by pushing the front end down as you accelerate and easing the bounciness that occurs as you move between acceleration and deceleration, it also seems to help with lateral balance. Maybe that’s because it allows you to focus on only side-to-side movements, without backward and forward heaves. Or maybe it's simply the added smoothness. But it really will help you eliminate wobbles and uncertainty at walking-pace speeds.

To do it, don’t just stomp on the brake lever and hold it there, graze it with your toe and keep a minimal amount of pressure. Barely enough to provide a little friction, just enough so you won’t coast if you were to pull in your clutch. Go try it – it works.

Grab a lower gear as you’re braking, let the clutch out quickly, and revs temporarily spike as the engine struggles to catch up to the rear tire’s speed. Downshift too quickly and you’ll lock up the rear tire due to the engine’s compression. This limits how hot you can come into a corner, since you need to manage decreased rear wheel traction as you begin to turn. The solution? Rev matching. By blipping revs to match rear wheel speed, the engine doesn’t need to catch up all of a sudden.

Simple to explain, but takes some practice to get right because it’s all about timing and feel. You’re braking with two fingers, right? Good, use the others to quickly blip the throttle after you pull in the clutch and downshift, spiking revs to where you think they’ll be in the lower gear. If you get that right, you can just let that clutch spring back out to seamlessly engage that lower gear. You should be able to maintain consistent brake force while blipping. That, plus knowing the amount of throttle to apply and the right revs to reach is where the practice comes in. So go do that and you’ll be rewarded with smoother riding, everywhere, but especially when flying into corners.

Whoa, whoa, whoa? You mean you brake in a corner? Yep, and it’ll make you both faster and safer. Here’s how and why.

Applying a motorcycle’s front brake will slow you down. Of course. And, in doing so, it’ll compress the front suspension and shift the weight onto the front tire, expanding its contact patch and increasing its grip. That has the dual effect of making the bike steer quicker and making it so you can push the front end harder. Together, that adds miles per hour.

You should really learn how to do this in the safe environment of a race track, where there are no cars around, where vision is good and where falling down won’t necessarily kill you.

Just brake a little later into a corner so you’ll still be on the brakes a little as you begin to turn. Feel good? Brake a little later the next time and a little later after that. Eventually, after much practice, you’ll get to the point where you’re hitting the apex at pace, just as you let go of the last little bit of front brake and begin to apply a little throttle. That’s right, no coasting, you swap brake for throttle at the apex.

It also helps with safety. Because the front suspension will already be compressed, the front tire’s contact patch already maximized, you’ll be able to use that brake lever to tighten or widen your line, without upsetting the bike. That pays huge dividends on the road, where you often come around a blind corner to spot a patch of gravel or similar. Trail braking will help you avoid that obstacle in a safe, fluid, smooth manner.

Is This Corner Tightening Or Opening Up?

Forget The Clutch For Upshifts

Forgive me if this sounds a little remedial, but I see a lot of guys out on the road who don’t know how to do this. Works on any bike, be it crotch rocket, assless chaps-mobile or two-wheeled Hummer H2.

The benefit is smoother, faster shifts and slightly lower clutch wear. It’s just easier and will better enable you to work shifting into the rest of your riding.

Super easy to do. As you accelerate and are approaching the point where you want to shift up, sneak your toe under the lever and apply a little upwards pressure. Now, quickly close the throttle a little while keeping that upward pressure on the shift lever, feel the gear slip home, and open it back up.

Takes a little practice to make it smooth, but once you’ve nailed it, you’ll be surprised at how little time it took. Doesn’t work so well if you’re cruising along at constant speed or decelerating (then why are you upshifting?), you’ll eventually just learn to get all your shifts out of the way as you increase speed, then be in the right gear for cruising along the highway or whatever. On some bikes, I still use the clutch between 1st and 2nd, just because going through neutral occasionally requires that in order to maintain smoothness. You’ll figure it out.

Countersteering. It’s the most often misunderstood, but most commonly practiced riding skill out there. If you ride a motorcycle or bicycle you already do it.

It’s way more simple than its counterintuitive nature sounds. Go out to your bike, sit on it with both legs firmly on the ground. Now, turn the bars to the left. Which way does the bike want to fall? Yes, to the right. Look at the front wheel, you’re creating a point, with it on one side and the bike’s main body on the other. The bike wants to fall towards that point.

Out on the road, if you’re successfully managing to not bounce off every tree, car and building, you’re already doing it, just subconsciously. Consciously practicing it will enhance your control over the bike and the speed at which you’re able to turn.

To do it, go practice in a big, empty parking lot. Ride along at 25 mph or so and give the bar on the inside of the direction you want to turn a little nudge. You’ll turn. Next time, nudge it a little harder. Then go out on the road and start incorporating that into your riding. There you go, you’ve mastered the art of the countersteer.

Works on a bicycle, too, so feel free to practice it there first.

Look Where You Want To Go

Car veering into your lane? Tight corner catch you out? Obstacle in the road? Lane splitting? Look at the gap, where you want to be, the spot on the track you want to reach, not at the hazard or car or obstruction. Your body and the bike will follow. Consciously think about this, force yourself to do it if necessary, it works. Practice doing it, this will save your life.

Save Your Balls, Use Your Knees

You’ve likely heard or read somewhere that, for better control, you should keep your weight off your hands while riding. But, when you’re braking heavily, it can be hard to keep that weight off your hands. The solution? Grip the tank firmly between your knees, then relax your upper body. Stomp Grip or a similar product that gives your legs better purchase on the tank can be a huge help here. Bonus: no more crushed testicles.

The front brake is the most powerful component on your motorcycle. It’s capable of altering your bike’s velocity far quicker than then engine. It’s a far sharper tool than that found in even the most expensive performance cars and, as such, is also more difficult to use. Name one Porsche or Ferrari that can loop itself over its front wheels with an accidental brush of the brake pedal.

The sheer power of the front brake on performance motorcycles is one of the main reasons we advise new riders to begin on something small and light; mastering a motorcycle’s brakes takes years of experience. Here’s a shortcut:

Above all, be smooth and progressive with your inputs. Grabbing a fist full of brake will just make you crash.

Rear brake? It’s great for low-speed control, but on non-chopper-style motorcycles, contributes little to outright braking power; under heavy deceleration, the rear tire becomes unweighted. (Some of us disagree with Wes on this one. Your rear brake is useful and should be used in conjunction with your front – Ed.)

Loud exhausts, flashy chrome, fancy tires and tacky paint jobs won’t make you fast, proficient or safe. Practice will. The best use of your time and money is putting miles under your wheels. Pick up a copy of Twist of the Wrist or Sport Riding Techniques, read them through, then pick out individual skills and go practice each until you’re an expert. Start combining them when you’re ready, never stop trying to get better and you’ll be an expert rider before you know it.

This article was originally published in 2013 and has been updated.