Some bikes, when you’re done riding them, leave you with a laundry list of opinions—the power’s like this, the handling’s like that, etc. As close as modern bikes get to perfection, there’s still no perfect motorcycle and every good thing is balanced by something unfavorable, annoying, or downright bad. For every power this, there’s a maintenance that. For every handling that, there’s a price this. Those bikes aren’t any less memorable as a result, though. Most times, it makes them even more unforgettable.

That’s the case with the 2022 Ducati Streetfighter V2. The Bologna brand’s latest Panigale gone Streetfighter bears a heavy resemblance to its V4 cousin but goes lighter on the wallet. Leveraging the category-bending Panigale V2 sportbike, Ducati strips away the slippery bodywork and aggressive ergos without sacrificing the platform’s performance potential.

The Streetfighter V2 flaunts the same race-worthy Superquadro 90-degree V2 and monocoque aluminum frame for that reason, but high handlebars and head-turning styling prepare it for life on the road. It's those nominal street-going provisions that made us want to spend a week with the 2022 Ducati Streetfighter V2. Spoiler alert: the results were certainly memorable.

With 100 millimeters of bore and 60.8 millimeters of stroke, Ducati’s Superquadro engine just sneaks under liter bike status at 955cc. That doesn’t stop Bologna’s engineers from squeezing every ounce of performance out of the 90-degree V-twin, though. Armed with twin injectors in each cylinder and a 12.5:1 compression ratio, the high-strung mill pays off in the power department with 153 ponies (at 10,750 rpm) and 74.8 lb-ft of torque (at 9,000 rpm) to its name.

However, riding the Streetfighter V2 isn’t as hair-raising as those figures suggest—well, in most cases. Siding with simplicity, Ducati equips its newest naked with three ride modes (Road, Sport, and Wet). While many manufacturers (Ducati included) justify ride-by-wire technology and price tags with an abundance of customizable options, the V2’s three-level approach meets all the conditions a rider could face on the road.

I encountered a few spots of rain during my maiden voyage aboard the Streetfighter and the Wet mode curbed the V-twin's initial thrust without dampening the fun. So much so that I forgot to switch back to Road mode when the pavement dried, and I carried on with nary a complaint. Resembling the power pulses of a middleweight naked bike, Wet mode delivered a mellower experience that thrived in urban environs.

That’s not to say that Road and Sport modes are unruly, though. On the contrary, both settings tackle congested conditions equally well, but the peppy throttle crack and heavy engine braking suit more spirited pursuits. From 4,000 rpm, the V2 remains manageable, but the rider can turn up the wick at any moment. The Superquadro truly comes to life at the 8,000-rpm mark, with both torque and horsepower rapidly climbing toward the 11,500-rpm redline.

In Road mode, that 8,000-rpm boost is exhilarating, but in Sport mode, it’s like engaging warp speed. Peripheral vision blurs, wind rushes by, and you hold on for dear life. For experienced riders, the sensation shouldn’t be frightening or panic-inducing, but it’s certainly worth a handful of chuckles. The Streetfighter V2 only concedes two horsepower and 1.9 lb-ft of torque to its sportbike counterpart, making the Superquadro right at home in the hyper naked. That's due, in part, to the advanced monocoque aluminum frame.

Even Malibu’s technical canyon roads couldn’t upset the Streetfighter V2’s composure. The handling was simply sublime. Where I looked, the bike followed, tagging apexes with consistency and ease. After long straights, the dual Brembo M4.32 monobloc calipers, self-bleeding master cylinder, and twin 320mm discs provided pinpoint accurate braking, allowing me to carry optimal corner speed before firing the Superquadro out of the exit.

It’s that mix of supersport agility and super naked power that makes the Ducati such an intoxicating experience. My only moment for pause came after realizing that Ducati wrapped the five-spoke wheels in Pirelli Diablo Rosso IV tires. Given the Streetfighter’s spec sheet, I would have preferred the Pirelli Diablo Rosso Corsa II hypersport tires found on the Panigale V2, but the road-oriented rubber performed admirably in all conditions.

Of course, electronic safety aids such as traction control, cornering ABS, wheelie control, and engine braking control help nurse those dual-compound tires. The rider aids aren’t all nannies, however, with the firm’s Quick Shift EVO 2 returning practically seamless upshifts and downshifts for thrill-seekers. It’s that adrenaline-fueled crowd that will flock to the Streetfighter V2, because for all of its performance and precision upsides, the Ducati also has a practicality downside. 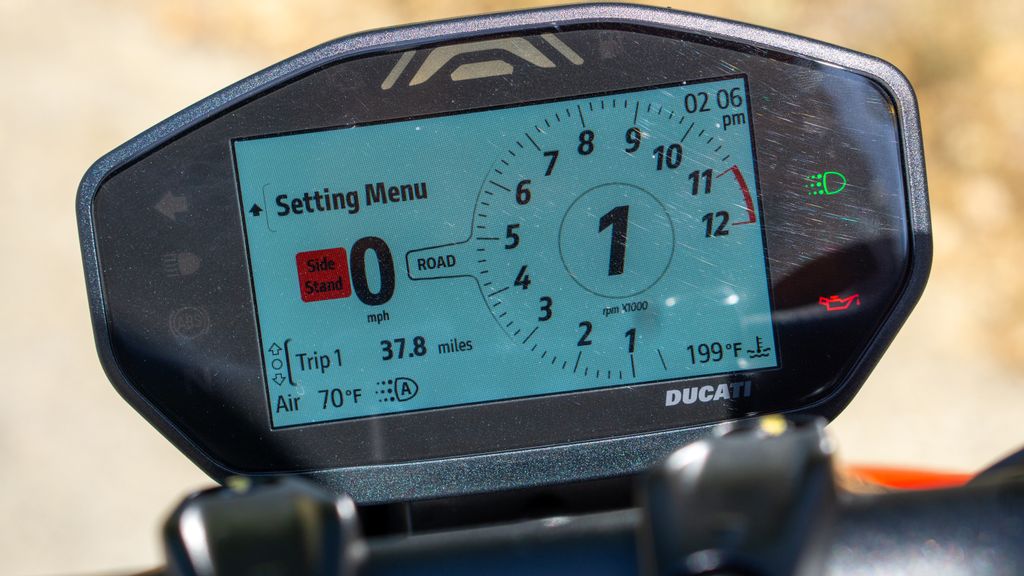 Modern naked bikes offer consumers a comfortable and pragmatic alternative to hard-edged sportbikes. Ducati softens the Panigale V2’s edges with a set of high handlebars, a longer, wider seat, and lower footpegs. Aside from the road-going ergos, the Streetfighter V2 is, for all intents and purposes, a supersport stripped of its fairings. Fuel consumption is rarely a concern for such race-bred sportbikes, and the same can be said of the Streetfighter.

Ducati lists the V2’s tank at a 4.5-gallon capacity, but the most I could fit into the fuel cell was 2.5 gallons. I should note that I immediately located a filling station as soon as the low-fuel light illuminated on the dash, but the most distance I could rack up before that point was 90 miles. During my time with the Streetfighter, I averaged between 29 and 33 mpg. That mileage certainly won’t attract commuters to the Ducati, but that’s not the only drawback that accompanies the thirsty V-twin.

Those interested in the Streetfighter V2 won’t need an accessory heated seat for the colder months; the bike’s exhaust system provides that winter warmth in stock form. Ducati coils and routes the rear header under the saddle before it plummets down into the catalytic converter. The Streetfighter may sport a dual-layer heat shield to deflect the warm air away from the rider, but the effect wears off once the bike comes to a halt.

The engine heat intensifies on high-traffic roads. At its highest point, the 4.3-inch TFT dash’s engine temperature reading reported 216 degrees (F). In motion, that number drops to 193 degrees (F), but the heat quickly wafts off the pipe and onto the pilot’s legs first before warming the seat and the rider’s unmentionables. As a result, I avoided rush hour at all costs and kept air flowing over the Superquadro engine.

Luckily, the TFT color screen helped me monitor the situation, but many riders would prefer a larger dash. Key information such as speed, gear position, and rpm prominently feature on the screen, but it isn’t easy to quickly gather information like trip distance, time, ambient temperature, and engine temperature. Navigating the submenus isn’t the most intuitive experience either. The blinker switch at the left-hand grip doubles as the mode button and toggling between settings can take some practice. I grew accustomed to the system over time, but the interface is quite simplistic, especially at the $16,995 price point

If you’re looking for a bike that rides on rails and blasts out of corners, all while delivering a comfortable ride on the road, the 2022 Ducati Streetfighter V2 should rank high on your list. However, if you expect that bike to also yield favorable gas mileage and run cool in urban environments, look elsewhere. I enjoyed nearly every moment I spent with the Streetfighter V2, but the customer’s lifestyle and needs will determine if it’s the right bike for them.

Road-ready ergonomics and styling may adapt the Panigale V2 for life on the streets, but the Streetfighter V2 both benefits and suffers from its Superquadro engine. As a member of the Panigalus Impracticalus species, the Streetfighter V2 is here for a good time, not a long time. That may not suit all riding styles, but it sure makes for a memorable experience every time you swing a leg over the Ducati.