A most domesticated rebel.

In talking to its existing customers, Honda quickly figured out that many of them were trading up to larger displacement bikes after a year or two in the saddle of their Rebel. Unfortunately, the vast majority of those buyers were leaving the Honda lineup to find what they wanted. Whether it be Sportster or Scout or otherwise, it was clear to Team Red that it was getting customers hooked on riding with the Rebel 300 and Rebel 500, but didn’t have the expanded Rebel product line needed to give cruiser riders room to grow and still ride red.

Honda’s new cruiserweight Rebels have been incredibly successful since they were introduced in 2017. While the Rebel name has been a staple of the Honda brand lineup here in the U.S. market since the early 1980s, they were sub-500cc bikes used largely as starter bikes and trainers. Clearly, the American market wanted something a little bigger, as 88% of Rebel 500 owners were trading in their bikes within 18 months for something larger. Honda only retained 27% of those buyers.

They say necessity is the mother of all invention. Honda knew it needed a bigger displacement engine for its top-of-the-line Rebel, so it looked around the shop for a torque monster to handle the job. It may have found a 1084cc parallel-twin in an unconventional place—in the big-bore Africa Twin, to be precise—but that engine seemed perfectly suited for the job as far as Honda engineers were concerned.

With one of the best engines in adventure bike history, Honda knew that it was robust and torquey enough to translate well across market segments. With a few tweaks—20% heavier flywheel, revised timing, electronic massaging, and a bespoke exhaust setup—the big, high-strung adventure motor was calmed down a bit to deliver aggressive street thunder. Claiming 87 horsepower and 72 lb-ft of torque, the Rebel 1100 is within a cat’s whisker of Harley’s Iron 1200 and exceeds that of Indian’s Scout Sixty, all while managing to be a lighter and faster bike than either of the American V-twin twins.

How light, you say? Under 500 pounds light! The six-speed manual model is 487 pounds ready to ride, and the dual clutch adds around twenty pounds to that total (that’s right, there’s a DCT!). Consider for a moment that this is between 50 and 70 pounds lighter than anything else in the segment, and it’s immediately obvious where this bike’s strengths lie. With a wide-set, feet-on-the-pegs feeling and low slung demeanor, the bike isn’t the kind of thing you drag a knee on. but it’ll scrape pegs with the best of them and feels light enough to really hustle through a canyon road without slowing down too much. It’s not a sport bike, though it may be the closest you can get to one with the old-school American look.

The Rebel 1100 seems like the perfect foil to entry-level American cruisers. Honda has clearly endeavored with the Rebel 1100 to stylistically ape the traditional cruiser market, going for something of a throwback Harley-Davidson Low Rider S look in 7/8ths scale. It has, at the same time, imbued the machine with a remarkably modern-feeling, lightweight chassis, responsive and fast-revving engine, and advanced electronics. It looks good, rides good, and is good. 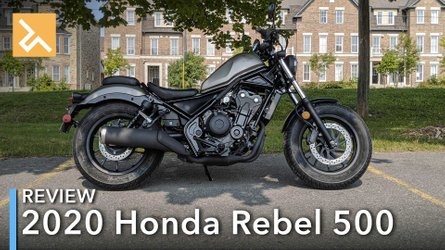 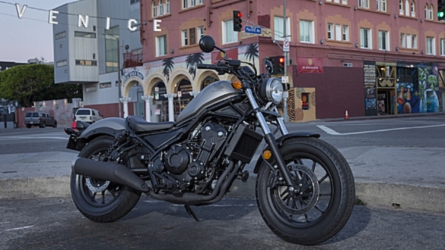 Much like Indian’s Scout Bobber or Harley’s aforementioned Low Rider S, the Rebel 1100 trades long-distance comfort for style points. As with any forward control riding position, your spine is stacked directly above the suspension point, meaning road imperfections are translated directly to your tailbone. Not quite as stiff as the Bobber, the Rebel offers 3.7 inches of rear suspension travel. I managed to put in almost six hours of riding in the Rebel’s saddle, but the discomfort began near the end of hour one and persisted through the day. The seat itself is very comfortable, however, and the low ride height means it’s approachable for shorter-legged riders. By the end of the ride, however, something as innocuous as a poorly-leveled manhole cover felt like a swift kick in the behind with a steel-toed boot.

I found the rest of the bike’s ergos to be quite good. The handlebars weren’t too far of a reach, and the forward controls are in a great location with an easily accessible rear brake lever. Nothing was out of place, in typical Honda fashion. Also, because the bike is so low to the ground, I found standover height to be quite easy. You’ll want to be able to flat-foot and stand up on this bike, because you’ll be standing at every stop light to allow your hind end meat a chance to regain blood flow.

The engine’s conversion from Africa Twin to Rebel hasn’t been without some sacrifices. For one thing, the Rebel 1100 doesn’t really sound like any other cruiser-styled motorcycle on the market. There is no mistaking this for an American V-twin, no matter how much exhaust trickery Honda employs. In spite of its 270-degree crank firing, the parallel twin still sounds like one. From idle to 3000 rpm, the engine is calm and makes for a decent cruiser. I found 3000 to 4000 rpm to emit an almost agricultural thumping unbecoming of a cruiser. From 4000 on up to the 8000 redline, the big Honda roars like a lion, but sounds much more like a big-bore sport bike than a muscular cruiser. From the factory the exhaust is best described as unfortunate, but luckily Vance and Hines has already developed a 50-state-legal slip-on muffler for the 1100 that makes it sound significantly better.

As for getting that power to the rear wheel, Honda is clearly hanging its hat on the dual clutch model. I was provided with a DCT model for the day of riding, and this machine has the capability to convert even the most vehement of foot-shifter evangelists. Unlike a traditional automatic, the dual-clutch will allow you to shift into a full control mode allowing you to hang the bike out at redline for as long as you want it to. I actually found it quite relaxing to put the bike in standard drive mode and just sit along for the ride, allowing the computers to do the smart work of shifting for me.

Around town and in traffic, the normal mode worked perfectly. Once the route scooted out into the sticks and the roads became twistier and hillier, a quick shift to sport mode made the experience exactly what it needed to be from an “automatic” bike. Throttle inputs were sharpened, shift points were moved up a few thousand RPM, and reduced intervention of the traction control. Sport mode is too jumpy for around town, and normal mode is too sedate for hard riding, so if you aren’t going to shift it yourself, it’s imperative to be in the correct mode.

I did spend a little bit of time on a manual-transmission-equipped version, and found the clutch to have an easy pull and the shifter to be typical Honda precise. This was a welcome departure from the clunky and difficult to manage controls from H-D or Indian. Someone recently told me that you don’t get any points in life for pushing yourself to endure unnecessary pain. Honda doesn’t cater to masochists, and wants to make everything as easy and accessible as possible for its riders. Even if you don’t have big beefy forearms, you shouldn’t have any problem holding the clutch in for a stop light.

There were a lot of things I really loved about the Rebel 1100. The red paint is gorgeous, deep, and so full of metal flake that it looks like forty different colors depending on the light. Fuel consumption was exceptional—regularly delivering over 50 miles per gallon—and given the bike’s 3.6 gallon fuel tank, could probably deliver 200 miles of range if you pushed it to the limit. The best thing, though? Everything described here is available for under ten grand! The 6-speed manual bike will run you $9,299, while the DCT version is an extra $700 bones. If I were buying one tomorrow, I’d go for the dual clutch. It’s really that good.

In all honesty the Rebel 1100 is a better motorcycle than anything else in its class. All it’s lacking is a little bit of style, a little bit of hardcore sound, and a little bit of comfort to be truly perfect. It’s so easy to ride that pretty much anyone with a modicum of riding sense can swing a leg over it and be ready to rip in seconds. I’m not sure if Rebel is the right name for a bike with this level of accessibility, but no matter what it’s called, it’s a good bike and it’ll sell.

By: Bradley Brownell
++
++
Got a tip for us? Email: tips@rideapart.com