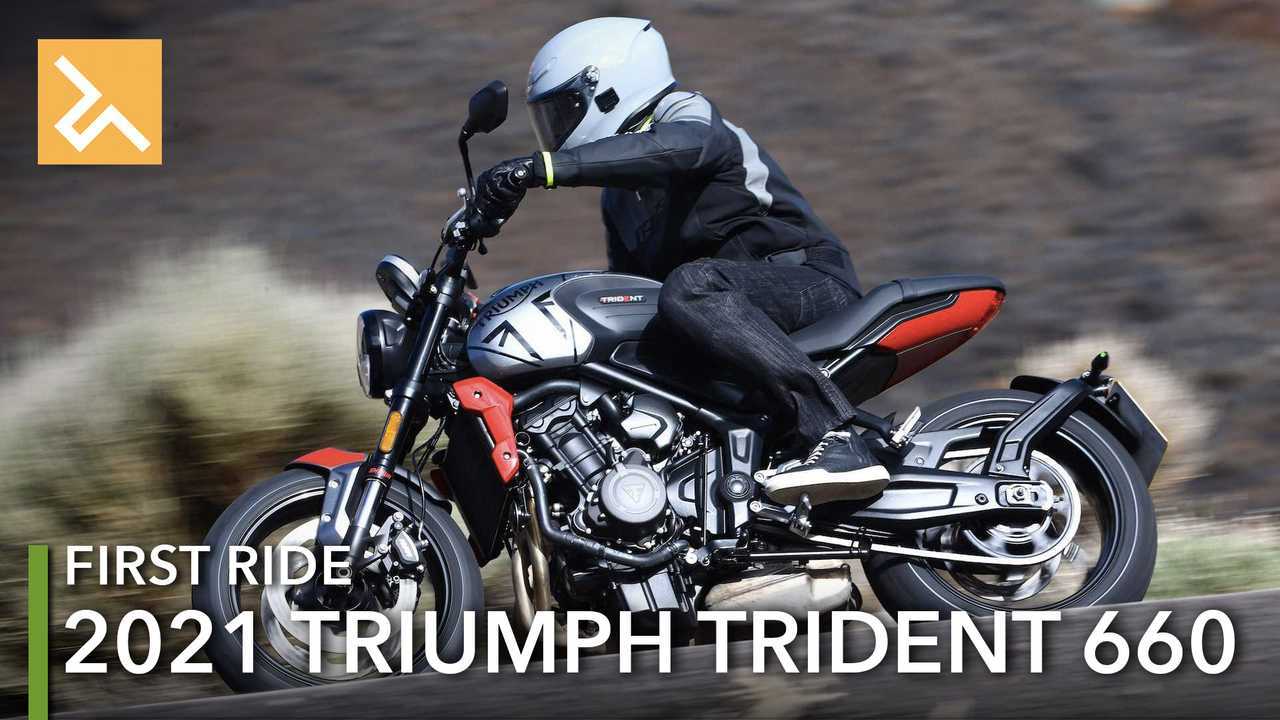 Tackling the mid-size segment in style.

In August, 2020, Triumph took us all by surprise when it unveiled a new, white-clad motorcycle prototype at the London Design Museum. Not only did the Triumph Trident 660 revive a historic name for the House of Hinckley, but it also set a new milestone of accessibility and affordability for the brand.

The entry-level naked bike officially launched in October, 2020, armed with a new engine and a new attitude. Our colleague Luca over at OmniMoto was lucky enough to put it to the test during a recent press event in Tenerife, Spain. Here’s what he had to say about the experience.

At Triumph, the name Trident has quite the legacy. Back in the late 60s, the original Trident was the epitome of the British racing motorcycle if its domination at the Isle of Man TT for five years in a row is any indication.

15 years after it was discontinued, the namesake made a comeback in the 90s as a standard bike, available in both 750cc and 900cc versions. Despite a seven-year run on the market, the Trident 2.0 didn’t have the same impact its predecessor. The model’s 2021 revival has nothing to do with the previous two bikes, aside from the iconic name and the inline-triple engine.

While the DNA is British, the design is signed by Italian designer Rodolfo Frascoli who, after completing the Tiger 900, sharpened his pencil and drafted up the new model’s signature components. They include the fuel tank’s broad shoulders, the 90s-looking tail end, the front end with the round headlight, the LED lighting at all four corners, and the TFT display integrated into the circular LCD gauge with smartphone connectivity via the My Triumph app.

Triumph’s attention to details is reflected in the Trident’s fits and finishes, notably in the mirrors and the controls clusters. All these elements confer the roadster a truly unique look in which form meets function.

The new steel tube chassis was introduced to the production line specifically to be used as the Trident’s backbone. It’s mounted to a Showa suspension system, brand dear to Triumph’s engineers, with 41mm, separate function inverted but non-adjustable forks with 4.72 inches of travel and a preload-adjustable monoshock with 5.23 inches of travel.

The resulting ergonomics reward the House of Hinckley’s efforts. The saddle sits at a height of only 31.7 inches, which allows most riders, even those shorter than 6 feet, to plant both feet firmly on the ground. The 31.3-inch-wide handlebar allows the rider to keep a somewhat straight stance while the foot pegs positioned backward, towards the seat, leave enough legroom even for the taller rider. Since lightness goes hand in hand with accessibility, the Trident 660 weighs in at 417 pounds wet. Not bad!

It’s easy to consider a new motorcycle’s engine the star of the show, and in the case of the Trident, you’d be right to do so. The Trident’s inline triple is a symbol of a new chapter in Triumph’s book and simply detuning the 765 wouldn’t have done it justice.

The engine base is that of the well-known Street Triple S, but Triumph put some meticulous work into making it more entry-level.  A total of 67 components in the liquid-cooled, 660cc, 12-valve, DOHC, inline-triple were modified to make it exclusive to the Trident. This results in a peak power of 81 horsepower at 10,250 rpm and peak torque of 47 lb-ft at 6,250 rpm.

The wrist-to-powertrain connection is ensured by the now popular ride-by-wire throttle, which isn’t a standard feature for a bike in this segment. The electronic throttle allows the roadster to come equipped with two riding modes—Road and Rain. Along with the traction control, they complete the Trident’s electronic package that positions the model as one of the best-equipped in the entry-level segment.

The 17-inch wheels are equipped with Nissin brake hardware that includes two 310-mm discs with two-piston calipers at the front and a 255-mm disc with a single-piston caliper at the back. The wheels are shod in Michelin Road 5 tires.

It might look compact both to the eye and on paper, but the Trident is surprisingly roomy, even for, er, vertically gifted riders. Once in the saddle, the Trident fits like a glove—a tailor-made, British glove. Color me surprised! I had some prejudice about the size of the bike, but I’m actually quite comfortable sitting on it. There’s only on the highway that the upright position is a bit tiring, but this is a naked bike, after all.

That’s not the only surprise the Trident 660 has in store, as I discovered during my day spent riding scouring the beautiful island of Tenerife, from its volcano to its beaches. It wasted no time pulling an ace out of its sleeve almost as soon as I sat on it. It might rank as an entry-level motorcycle, but it acts with a lot more maturity than you’d expect.

The suspension isn’t particularly sporty but performs admirably well when we leave the highway behind and make for the hills. The monoshock feels softer than the forks that mimic the volcanic asphalt’s occasional imperfections. That being said, that front-end rigidity is also what makes it easy to attack the bends and maintain a natural trajectory.

It doesn’t want to, nor should it, be ridden like a hooligan. It doesn’t have the nervousness associated with other motorcycles. Its demeanor perfectly matches its engine. The British inline triple is easy to manage, linear, with plenty of pull in the mid-range, and an acceleration reminiscent of the bigger triples but with more moderation.

The ride by wire throttle’s response is immediate and provides the level of precision we're accustomed to getting from Triumph. The delivery is fluid but definitely not flat and the engine happily churns all the way around the rpm arch. You notice the vibration in the handgrips only at a constant speed above 7,000 rpm.

The gearbox is precise and responsive and I can only imagine that the optional quickshifter adds to the satisfaction of toying with the triple through the curves.

When you need to tug on the reins like we had to do when sleet caught my colleagues and me off guard on the Teidi, there’s the Rain mode that seriously alters the power delivery. If the mapping initially feels a bit castrated, the contrast between the two modes is necessary considering the type of customer base Triumph is targeting.

As for the traction control, the system is punctual—perhaps a little too “present”—but not too invasive. Which is fine, it’s a good feature to have for less experienced riders. The same cannot be said of the ABS that intervenes as soon as you pull the throttle and up the pace.

This could possibly be due to the fact that the braking is system is efficient enough and well-adapted to the bike’s performance. That being said, the controls aren’t as gradual as they could be, particularly at the back, but that’s something you get used to after a few miles in the saddle.  The standard Michelin tires have their limitations, but they don’t take away from the bike’s abilities despite a few patches of ice and wet asphalt.

The Trident stands out for yet another reason—after roughly 136 miles of riding and without even trying really hard, it maintained a frugal 47 miles-per-gallon.

The 2021 Triumph Trident is a balanced and mature bike despite its compact format and ranking in the lineup. It proved that it can proudly carry on the Trident legacy.

Also In The Mid-Size Roadster Segment: