We watched the show and chatted with Ewan McGregor and Charley Boorman.

Back in August, 2020, Apple confirmed it bought the rights to The Long Way Up, Ewan McGregor and Charley Boorman’s latest, aptly-named motorcycle adventure. Since the dynamic duo was last spotted in December, 2019, wrapping things up in Los Angeles we were left to wonder where and mostly when we would get to see the third Long Way chapter in our screens. In the past, the series was initially broadcasted on British television but this is 2020—one of those streaming services was bound to pick it up.

This means that if you wish to rekindle your bromance with Ewan and Charley (and cameraman Claudio by extension, of course), you need to subscribe to the service. That’s not something all of us want to commit to considering all the plethora of other (and admittedly more attractive) streaming services currently available. The good news is that with the series’ imminent launch, we were offered the possibility to preview the first three episodes so we could share our thoughts on The Long Way Up with you.

Bonus: we even got to have a short chat with McGregor and Boorman to hear what they had to say about their experience. So, I took one for the team—courageous, I know, but someone had to do it (You’re the hero we deserve –JM)—and did some “homework” watching the first three episodes and having a proper chat with the duo. Here are my thoughts on the new series so you can decide whether you want to give Apple your money.

What McGregor and Boorman had to say

In the Summer of 2019, Charley Boorman confirmed in an interview recorded at the Bike Shed Motorcycle Show that Ewan McGregor and he were planning a third Long Way trip. We later learned that this time, they would travel south to north on a par of specially-prepared Harley-Davidson LiveWires, accompanied by two Rivian R1T electric pickup trucks.

While pictures of the crew with its electric vehicles surfaced on Instagram— and we were able to track their progress via South American news outlets and social media—, it wasn’t until the adventure was over and in the rearview mirror that the people involved started opening up about it.

The chance to talk with McGregor and Boorman and hear what they had to say about their trip was a great opportunity to gain some insight into the experience. If you’re a fan of either or both guys, you’ll be glad to know that they’re as cool and funny in person as they are in the show. I would easily have sat there to chat with them for hours-on-end, but we only had eight minutes on the counter so I did my best to make it count.

Of course, I was curious to know how this new adventure compared to the previous two and whether it was better or worse than they anticipated. Summarized, it was a little bit of both.

“Being one of the first handful of people to be able to head up and go from the bottom of Argentina to Los Angeles seemed like a great idea. As usual, Ewan and I, we’re always kind of up for a challenge and ready to go. We said “Yeah! I think it’s a great idea riding electric motorbikes” but I don’t think we really had an idea of what to expect,” Boorman said.

“Suddenly we were down at the bottom of Argentina, we had all our gear on, it was freezing cold, we were delayed three or four days because of a blizzard. Finally, we got a break in the weather and we headed off and then we realized that we weren’t going to get as far as we thought we were going to get because batteries don’t like the cold. They don’t perform as well. There was this sort of range anxiety learning curve that we had to deal with in those first few days. It was only at that point that we started thinking “Whose idea was it?”—and then we realize that it was our idea.” he recalled. “But it was brilliant and I think it will be one of those memories (that will last) forever.”

During the series’ first episode, there was a whole discussion about electric motorcycles being the future despite the current challenges the technology faces. While I have my own opinions about what improvements should be made to help the technology gain popularity, I wanted to know what they thought would have improved their trip—better charging times, better range, more stations? McGregor jokingly answered: “Everything you just said.”

“We knew before it that it’s certainly not easy to do when you’re in the middle of nowhere. The infrastructure being very non-existent in the remote parts of Argentina and all the South American countries really. There are charging stations but only in the cities and of course, most of our journeys weren’t in the cities,” he added, on a more serious note. “We knew that going into it, we had an awful lot of great help. We just got by however we could and it became part of the fun of doing the trip, really: finding somewhere to charge. We’d find a restaurant at lunchtime and we’d ask if they minded if plugged in. The fact that it was difficult to charge, it became the adventure.”

Considering how different this trip was, I asked them what they would have done differently. McGregor, being his smart-ass self, answered right off the bat “I’d have gone on a petrol bike.”
“The adventure and the challenge are the reasons why you do these trips. I certainly wouldn’t change anything. It was good fun. Apart from the petrol,” added Boorman. 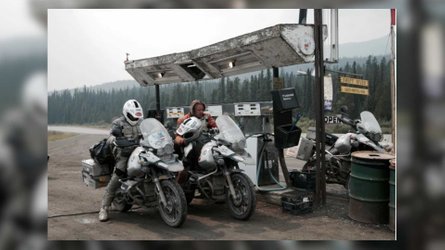 Long Way Round Celebrates 15 Years On The Road
⠀ 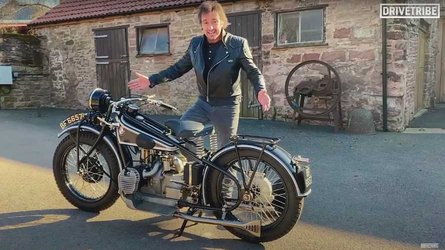 It’s so good to be back in Ewan and Charley’s luggage and follow them on a new adventure. If you missed them, their chemistry, and their shenanigans, then it won’t feel like over a decade has passed since you last “hung out” with them. Ewan continues to “wooh” his way through breathtaking landscapes and Charley is still his good, old, hands-off riding self.

If I could describe my overall feeling best, there’s a modernized familiarity to the show (at least the first three episodes). The familiar part lies in how they still set up their shop in a flat somewhere in England that turns into a buzzing HQ with a gigantic map pinned on the wall and a slew of experts’ input to prepare them for their journey, the usual gear goodies unpacking, and the overall sense of camaraderie among the crew. There are still last-minutes hurdles that they magically overcome, selfie-type vlogs in which the riders share their thoughts, and the same contagious, childish excitement about traveling to unknown lands.

The modernized aspect is showcased in the access to better technologies both from a technical and production perspective. Helmet-mounted cameras and drones are tools that were now available to them.  of and the former BMW and Mitsubishi vehicles were replaced by a small fleet of electric motorcycles and trucks.

This third series definitely feels like a leap forward into the 21st century compared to the first two. Their decision to travel such a distance (15,000 miles or so) on electric motorcycles allowed them to showcase how well the technology can perform while also informing the audience about its limitations.

Three episodes in and I noticed that the show doesn’t have the same grittiness as The Long Way ‘Round and The Long Way Down. As McGregor put it during the interview, compared to their previous two adventures where they could simply pick a spot in the wild and camp, this time, the planning was much different due to their need to plug and charge the motorcycles.

If you liked the previous two series’ rawness, chances are you’ll find that this third installment lacks the “up close and personal” treatment that made McGregor and Boorman so approachable and endearing. The treatment is more polished and the use of drone shots, which results in absolutely spectacular venture points, also takes us out of the bubble.

The struggles and challenges aren’t about getting the bikes to run again in the middle of nowhere and facing brutal terrains any more than they were about being able to charge the bikes.

Though McGregor said that it became part of the adventure, it also feels like the whole charging aspect also got a little bit in the way. Sure enough, the series’ third episode ends on a bit of a depressing note, when the guys realize that things were going much slower than they anticipated and that they still had a very long way to go.

Despite a moody ending to the third episode, I’m pretty sure that things lighten up in the following episodes, once the reality sets in and that they come to terms with the fact that this trip won’t be anything like the previous. I’m confident the future episodes won’t revolve so much around the charging itself and will instead become the vicarious experience that got us hooked the first two times.

As the duo explained during the interview, the first few days (documented in the first three episodes) were the most challenging because they had to learn to deal with a different, more limited technology. They eventually got a hang of it. The fact that the partners also managed to create a V2M network—vehicle to motorcycle—that allowed Ewan and Charley to charge the bike directly from the Rivians about halfway through the trip likely contributed to cheering things up and relieving a bit of that range anxiety.

If you can forgive the fact that the series cleaned up a little bit, I think you’ll still get to enjoy the time you spend following Ewan and Charley. I know I did.

If you’re the binging type like I am and want to wait until all the episodes are out to get your Apple TV+ subscription—that’s exactly what I’ll do. If you like the more old- school “new episode every week” thing better, then, sure, give it a go.

I think it’s worth it if only to get immersed in the Ewan and Charley universe once again. Get your Apple TV+ seven-day trial and check out the first episodes to get a feel for it and see what you think about it.