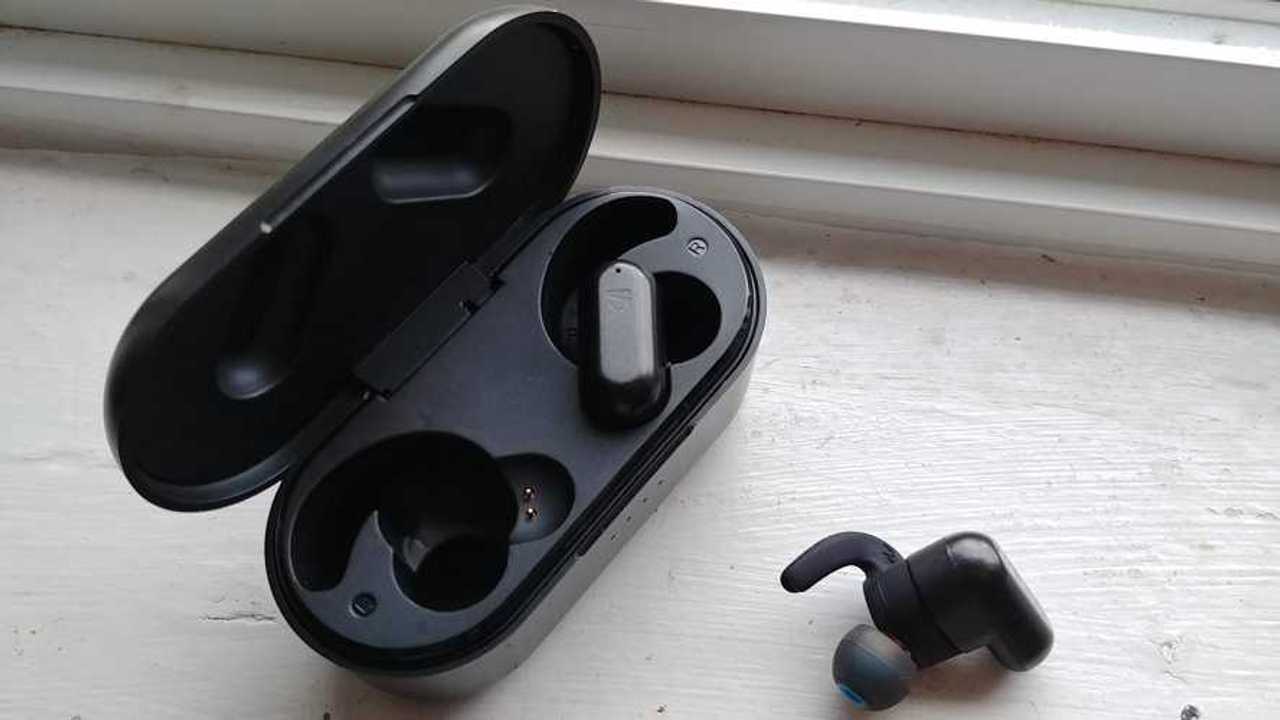 Music on the go minus the wire.

I spent two weeks riding around Europe back in June. Some of my most vivid memories of this trip include the breathtaking landscapes, testing my limits on the Autobahn, and getting tangled up in my earphones’ cord. I kept an earphone in my ear at all times to listen to the navigation instructions which meant feeling a tug when I moved my head and managing four feet of tangled cord every time I stopped and removed my helmet.

Check Out These Reviews:

I've never been an aficionado of wireless pods because I’m just old school like that, but two weeks of constantly having to cram the cord in a pocket not to have the other earphone flap into the wind made me realize I needed a better option. When I was offered the opportunity to check out Soundpeats’ all-new Truengine2 wireless earphones, I knew this was the occasion for me to step my earphone game up.

Soundpeats was founded in 2010 and specializes in compact, portable audio devices (read: earphones). Its collection of products includes a variety of wired and wireless earbuds. The company has now launched a new set of wireless pods called Truengine2 which I got to test prior to the launch.

I always use pods without all the fancy contraptions wrapping around the ear to hold them in place because I usually just can’t stand them. So when I got my hands on the Truengine, I was a bit skeptical of how comfortable the pods were going to be. They are fitted with a soft rubbery loop called a Freebit earfin meant to sit inside the concha of the ear and hold the pod in place.

It took me a bit of figuring out to properly fit them since I had steered clear of this type of contraption until now. Once I did figure it out, however, it turned out I had nothing to worry about. The fit is actually pretty comfortable and I can barely feel the pods as I wear them.

Pairing with my cellphone was easier than a lot of other devices I've tried pairing with my phone in the past. As soon as I took the pods out of their case, they started scanning for a Bluetooth pairing. I was puzzled when I saw not one but two Soundpeats Bluetooth connections available on my cellphone.

It turns out that if you pair both connections with your smartphone, it allows you to use either the two earphones simultaneously and benefit from the full high-definition sound, or use a single pod, in which case the sound switches to mono. This happens automatically, provided you leave the unused pod connected in the case.

Speaking of the case, the pods come neatly stored in a case that acts as a charging base. Like a power bank, you charge the case itself when you need to—either using the cable provided in the kit or using a wireless pad. Once it’s fully charged, your experience of the Truengine2 earbuds becomes entirely wireless. The case is compact enough to be easy to carry around. Need your music fix? All you have to do is take the pods out of the case to activate them. Put them back in their compartment once you’re done—connecting to the case automatically shuts them off and charges them, which keeps them ready to use at all time.

As for the sound, it actually is better than I anticipated. For some reason, I expected my music to sound dull coming out of wireless earphones. Call it prejudice. Turns out the sound quality is pretty darn sharp. I mean, it’s not sitting in the best seat of the opera house listening to a philharmonic orchestra belt out Vivaldi’s Four Seasons good, but it’s really good. The sound is well balanced, the mid-ranges aren’t overwhelmed by an excessive amount of bass yet there’s just enough beat to give the sound a great depth.

Soundpeats also claims you can activate your voice command assistant and even make calls with the Truengine2 in your ears—which of course I also had to try. The person I chose to call confirmed that the sound was really good on their end and that they could hear me very clearly, meaning the microphone on the pods does a decent job.

I found using the voice commands trickier. I tried a number of commands, and in some cases, the earphone got disconnected as the assistant was analyzing and responding to my request (“what’s the forecast for today”).

I can see this being a convenient feature but my experience of it has been a bit inconsistent with my LG smartphone (edit: the company got back to me on this matter and confirmed that their team had run thorough testing in Apple, Samsung, and Huawei environments successfully, suggesting the LG compatibility could be at cause here). Once I got it to work, however, it worked great, but the path there was rockier than for the rest of the functionalities. To pause/unpause the music or to answer a call, all you have to do is tap one of the earbuds—it takes a bit of getting used to to understand where and how to press, but I eventually got a hang of it.

And In A Helmet?

Now, full disclaimer: these earbuds aren’t specifically designed to be used in a motorcycle helmet. Their profile isn’t optimized for it. If anything, the little boxy part of the earphone that sits outside your ear is even a bit bulky compared to other wireless earphones. I fully expected to keep the pod in place in my ear while putting my helmet on. While I had to be a bit more cautious, the pod remained perfectly in place. That earfin actually works its magic when there’s downward tugging.

If I’m not careful, it’s when I take my helmet off that the pod tends to get pulled out. But I’ve managed on a few occasions to successfully remove my lid without pulling the earphone out. Once inside the helmet, the pod is comfortable and doesn't get in the way—the helmet doesn't press on it or wiggles it around.

The system uses a CVC noise-canceling algorithm that helps keep the sound clear even when there’s ambient noise. Turns out it works in a motorcycle helmet just as well. I had the occasion to test the pods while riding on the highway and I was able to hear the navigation instructions very clearly. I even tested with music to get an idea of how consistent the sound quality is. Frankly, whether it’s doing 60 miles per hour on the highway on a Triumph Speed Twin or standing in my kitchen going full-on Risky Business, I noticed no difference in how clear and sharp the sound is.

The only downside to using these earphones instead of a helmet-specific system is the fact that the voice commands can’t be used. I tried "Ok, Google-ing" while I was riding but the sound of my voice didn’t reach the earphones. This means you don’t have any control over your smartphone while riding—which I don’t think is a terrible thing.

The Soundpeats Truengine2 earbuds offer pretty much the same features as most wireless earphones on the market. From what I was able to gather, their real advantage over their competitors is the fact that the system adapts the sound to the number of pods in use—whether you are using both simultaneously or only one like I did in my helmet. The company also claims that the Truengine2 system uses the “best-in-class chip” which combined with the Bluetooth 5.0 protocol is supposed to optimize the wireless connection.

Don’t worry about getting too hot in your helmet, the pods are actually water and sweatproof. Claimed playing time on a single charge is 30 hours, but honestly I didn’t get to 30 hours or music just yet to confirm the claim.

Along with its new product, Soundpeats also launched a Kickstarter campaign for its new earphones which allows you to grab a set for 50 percent off the retail price of $120. In fact, the campaign has already reached over 100 percent of its $15,000 goal within a few hours and the orders keep on coming. The earphones are expected to become available in October 2019.

I wouldn't tell you to throw away your current pair of wireless earbuds to replace it with this one, but if you're currently shopping for a pair, go for it. Especially with the promotion pricing offered during the Kickstarter campaign, I think it's perfectly worth it. I quite enjoy the Truengine2 and plan to get a lot more use out of them. The days of the tangled cord are officially over.

Embargo until 9 am EST, Sept 3

San Diego, California – SOUNDPEATS, a leading maker of high fidelity wireless audio devices as well as the Amazon bestseller of headphone category, announces the launch of Truengine2 - The Most Advanced Dual-Driver Wireless Earbuds. Powered by a patented dual-driver design and a built-in audio crossover, the Truengine2 Wireless Earbuds deliver an incredible listening experience for music, gaming, and sports. SOUNDPEATS is available on Kickstarter: https://kickstarter.com/projects/soundpeats/soundpeats-trengine2-the-hifi-dual-driver-tws-earbuds

Wireless earbuds have proliferated in the mobile digital era and add convenience to active lifestyles. However, one of the challenges in creating small form factor earbuds is maintaining sound quality. Most common earbuds contain only a single audio driver and very basic sound components. Now, with Truengine2 from SOUNDPEATS, audiophiles can finally enjoy a high fidelity sound for mobile wireless.

Truengine2 makes this possible by using dual drivers in their earbuds for acoustically optimized sound at all frequencies with powerful bass, accurate mids, and crystal clear highs. The resulting HiFi sound is improved further with a built-in Truengine CrossoverTM, for perfectly balanced audio separation, creating a wider sound field for a totally immersive audio experience.

“There are many wireless earbuds on the market today, but most lack the sound quality that true music lovers insist on. Our goal is to combine the convenience of wireless with an elevated listening experience. By utilizing a dual-driver system along with a built-in crossover, we have achieved the ultimate true wireless sound.” CEO SOUNDPEATS

In addition to the incredible sound experience, Truengine2 makes phone calls crystal clear with an effective CVC noise-canceling algorithm that eliminates interference from unwanted outside noise. This feature means that volume levels can be lower and safer for listening.

Made with active lifestyles in mind, Truengine2 features a patented ergonomic EarfinTM design for a secure fit for sports, exercise and daily use. They use the super stable Bluetooth 5.0 wireless protocol and with IPX5 sweat & waterproof performance. The earbuds are the perfect companion for sports lovers and busy, on-the-go people.

The Truengine2 Advanced Dual-driver Earbuds set a new standard for wireless sound and elevate the listening experience for music, games and audio. They’ll offer VIP Special Discounts and deals up to 50% OFF for the early adopters and music enthusiasts.