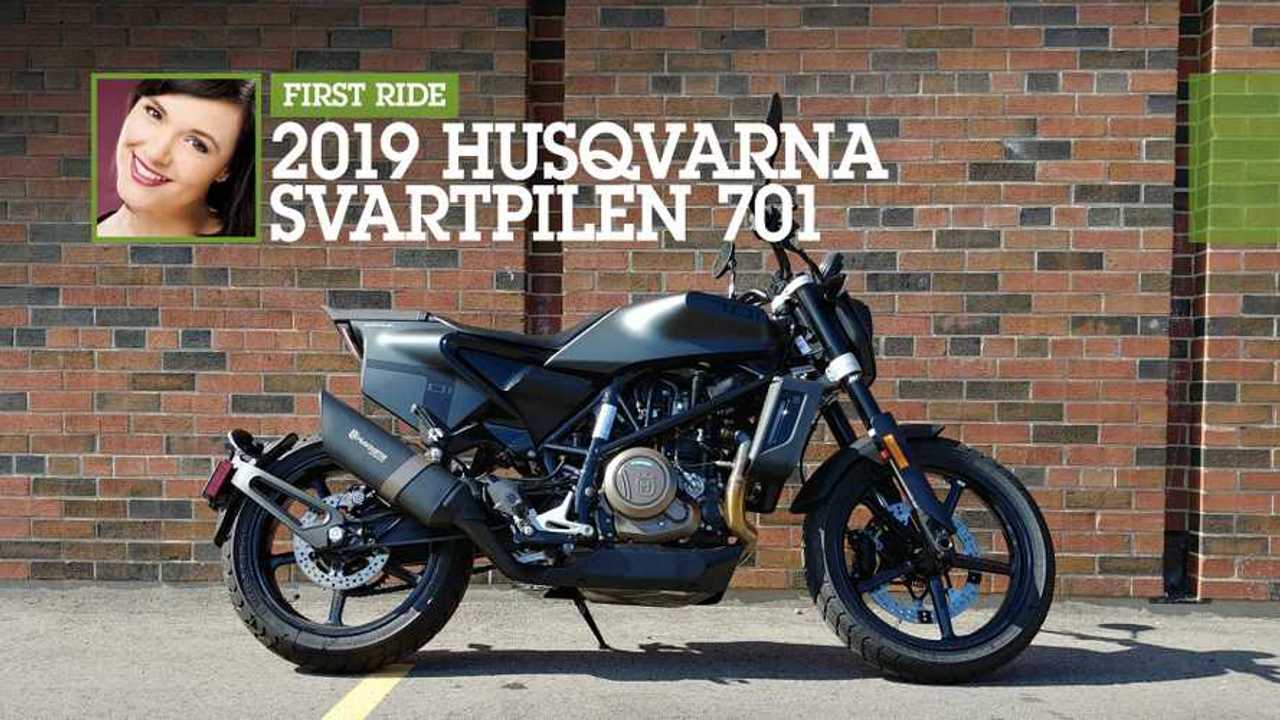 And finally, the Svart.

Out of the blue, I was offered a last-minute chance to get on the all-new Husqvarna Svartpilen 701. The Black Arrow was on my 2019 bucket list of “Must Ride” so of course, I was going to say yes and of course, I was going to do the necessary to get to the bike. I jumped in an Uber on a Friday night and picked up the “Svart” from another journalist based out of Toronto. The clock officially started ticking right then and there because I would only get to enjoy the bike for a few short days. So enjoyed I did and I thought I would share my thoughts on the quirky flat-track inspired twin of the Vitpilen.

2019 Husqvarna Svartpilen 701: Everything We Know

If you've been following what Husqvarna's been up to in recent years, the name Svartpilen probably already sounds familiar. Already in 2015, Husqvarna introduced the Vitpilen and Svartpilen 401 concepts to the world with a promise that the two bikes would make it to production. The models were introduced for the 2018 model-year, followed closely by the Vitpilen 701. The Svartpilen made us wait a while longer but finally, the Black Arrow made it to the market for 2019 with its big thumper and look inspired by the increasingly popular world of flat track racing.

Look-wise, I’ll have to admit that the bike looks better in pictures than it does in person—a terrible faith for anyone with a dating profile. It’s not exactly that you walk up to it and think to yourself “what an ugly bike” but from up close, the Svartpilen has a confusing profile. The bulging gas tank, almost flat saddle, and bizarre tail profile create interesting shapes you experience best when you look at the bike as a whole. The closer you get to it, the quirkier slash weirder it gets.

The design is anything but conventional which is an advantage when you need to stand out from the crowd of middleweights, but can also act as a deterrent. Once you swing your leg over the bike, however, you forget all about that visual first impression because ultimately, its the impression you get from sitting in the saddle that truly matters.

From an ergonomics standpoint, I find the bike extremely interesting. The saddle is tall—not adventure bike tall, but tall enough at 32.8 inches. This is something that is consistent with the flat track racing style and something I noticed the Husky has in common with the Indian FTR 1200. For me, a 32.8 inches inseam is a perfect height, with my foot reaching gracefully all the way to the ground in an almost straight line. Fits like a glove.

The model’s chassis is tall as well, and the footpegs are positioned low on the frame, which creates a very nice and comfortable 90-degree bend in the knees. Now the bulges on the tank might look weird, but they allow for the tank to be narrower towards the saddle, creating convenient dents to tuck your knees in. The hands’ reach is straight ahead and bit wider than the shoulders, but close enough to keep a certain bend and flexibility in the elbows. Overall, the geometry feels very square, but also relaxed, which creates great rider-motorcycle dynamics in my opinion. The bike is also incredibly lightweight for the size it is, tipping the scale just below the 350-lb mark dry (without fuel).

The best part about the Svartpilen though is that it's a blast to ride on. The gears are long-enough to allow you to gain some speed without having to change gears every three seconds—depending on how tolerant you are to buzzy-ness in the grips, but more on that later. Considering how light it is and how relaxed the riding geometry is, it’s easy to rock the bike back and forth and to maneuver it around the city.

Red for the front fork, white for the rear shock.

The Svartpilen is jacked up on a set of WP suspension with a 43mm fork at the front and a single shock at the back. I find the suspension to be a bit on the stiffer end of the spectrum. The bike doesn’t seem to suffer from it, but the riders feels it, especially in a city like Toronto. Considering how bad the roads can be in my neck of the woods, I’ve grown fond of avoiding the worst of the ruts and bumps simply by standing on the pegs—an extremely easy move to pull off on the Svartpilen. That being said, both the fork and the spring are adjustable and the controls are located right next to the handlebar—easy peasy lemon squeezy.

Of course, you’re sitting on a (relatively) big, 649cc single cylinder thumper, a mill that has a lot of character and charm, but also weaknesses. It is musical and throaty if you like a more primal sound, and the power delivery is straightforward and linear. The engine delivers 75 horsepower and 53 lb-ft of torque which are sufficient numbers to get the bike moving with ease. Then you hit 6,000rpm. That’s when the bike starts becoming buzzy—uncomfortably so. You feel it in the handgrips first, then as the speed and the rpm escalate, you also see it in the mirrors which become useless on the highway.

Maybe with age I’ve lost my tolerance to the amount of vibration I’m able to withstand from an engine, however, riding on the highway with the Svartpilen was an irritating experience for me. The tickling feeling caused by the vibration in the grips from the single working overtime to reach highway speeds kept making me want to let go of the handlebar. Thankfully, I didn’t have to stay on the highway long and I rapidly got back to enjoying myself at lower speeds.

I know it's the nature of the beast so I guess that opts me out from being a potential buyer since my reality usually involves having to get on the highway at one point or another. That makes me a little sad truth be told.

Braking is decent, but lacks any real grip—that's how you know this isn’t a bike that’s meant to go at ludicrous speeds. I ended up mainly using the front brake over the rear one because the front provided just the bite I needed. The back brake felt mushy. Add to that the fact that the lever is positioned at a weirdly long distance from the footpeg which requires your foot to perform a rather unnatural-feeling motion to be able to reach it. It feels as though if I had smaller feet I wouldn’t be able to reach it at all. Just like anything else, though, you adapt and fine-tune the technique as you get better acquainted with the bike.

To say that the Husqvarna Svartpilen 701 is quirky is an understatement. It’s one of the only big singles out there and that lonely pot sure gives it a lot of personality. The flat track inspired silhouette is weird, but in my opinion, in this day and age, weird is much better than “looking like everyone else”. Despite the few bones I had to pick with it, my overall impression of the bike is a positive one. It’s not perfect by any means, but ultimately, it’s a great and fun bike to get your hands on. While I haven’t had a chance to take it out on a proper whip outside the city where the roads are pretty, I’m willing to bet that it would perform beautifully in the bends. Just throw it in a trailer to haul it there if you have to take the highway.