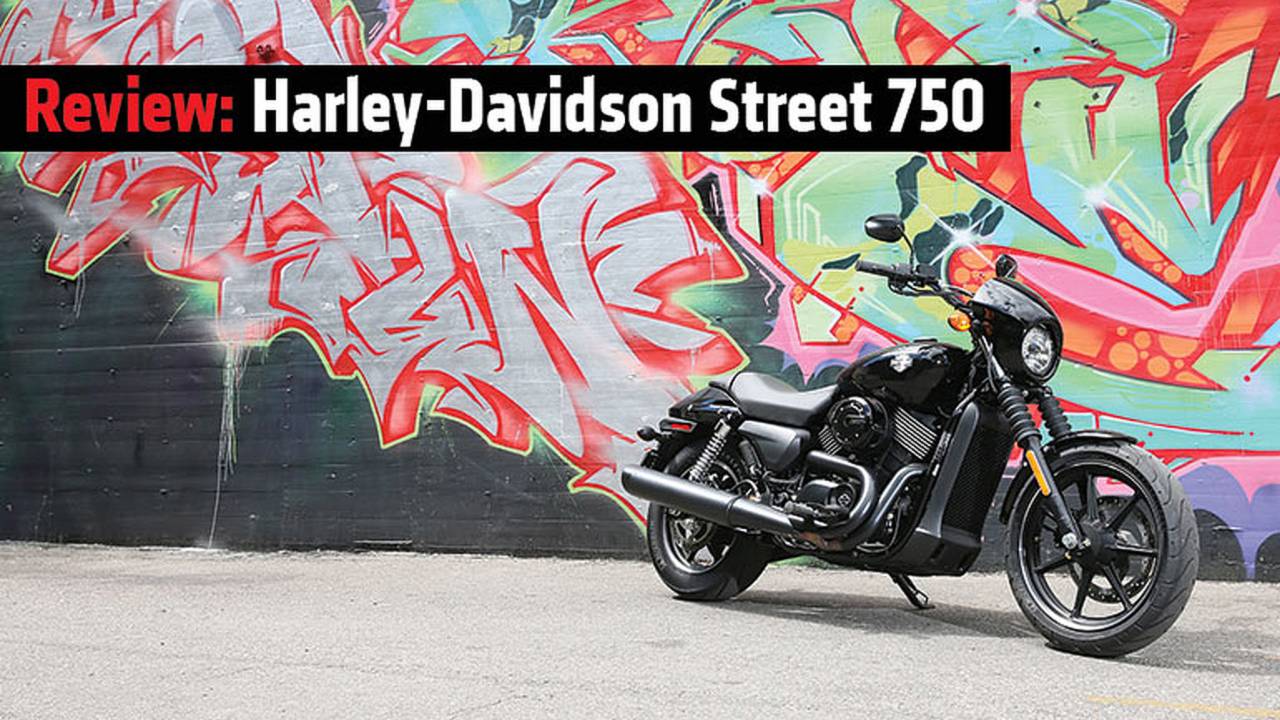 What ho, the little Harley!

The enviable position that Harley-Davidson is in as one of the world’s leading brands is both a blessing and a curse. The Motor Company has a loyal and rabid following, millions of devoted riders and plenty of customers buying clothes, souvenirs, branded key chains, lamps, rugs, dog collars, bottle openers and just about anything else with the bar and shield on it.

That’s the blessing. But those loyal subjects are a shrinking demographic, and that’s the major curse of being the incumbent giant in the industry. Unless your business is called “Depends,” you really can’t solely count on an aging community for business growth, it's just not going to work. Harley-Davidson needs new blood, and they need to find it without alienating the old blood in the process.

Enter the 2015 Harley-Davidson Street 750 (or the XG750 in Harley-speak), a liquid-cooled, 60-degree V-Twin-powered entry-level motorcycle and the first all-new platform and powerplant from H-D in over a decade. Think of it as the replacement for the Buell Blast or an alternative to a Sportster.

Following hot on the heels of the Project Rushmore makeover of the Touring lineup, the Street bikes (note: there’s also a Street 500 (XG500) on the way) were developed in a feedback loop with H-D customers – or target customers, anyway. Harley asked young adults (hey, that's you reading this: the age 18 – 34 demo) what they wanted in a Harley, and incorporated the “voice of the customer” into their product planning. They did something similar with Project LiveWire too.

I got a chance to spend a day in the saddle of a 2015 Harley-Davidson Street 750 on a group ride in and around Austin, Texas. Here's what I thought.

The Street 750 is based around the all-new Revolution X, a single overhead cam, four valves per cylinder, 60-degree V-twin. The engine is backed by a 6-speed constant-mesh spur gear manual transmission and belt final drive. Fuel is handled by a Mikuni single port (38 mm bore) fuel-injection system. It displaces 749 cc (46 ci), and rated to achieve 41 mpg in combined city and highway riding. Harley won't disclose horsepower figures yet, but peak torque is quoted at 44 lb-ft @ 4,000 rpm and we predict horsepower in the low 50s range. The engine is styled to look like it's a member of the Harley family - with the familiar cooling fins, a black wrinkle finish and black rocker covers. The radiator is tucked in front between the frame downtubes and gets a plastic shroud that sort of blends in with the shape of the bike. It looks good, it looks mean and it looks like you would think a Harley should.

The Street gets 7-spoke cast aluminum wheels (17” front/15” rear), a conventional, non-adjustable 37mm telescopic forks and dual rear coil-over shocks (adjustable for pre-load only). Travel is moderate, with 5.5” for the front and 3.5” for the rear. Floated two-piston calipers handle braking front and rear with uniform expansion rotors.

Harley emphasized that the Street is intended as a “blank canvas” for customer expression (which means that they’re going to introduce a ton of bolt-on accessories in the near future). The obvious inspiration for the bike’s overall look is the influential flop, Willie G’s 1977 XLCR, the classic Harley Café Racer. The Street sports a small flyscreen fairing and a forward-leaning stance. Mid-mount foot controls and a slammed 3.5-gallon gas tank keep the bike from looking too cruiserish. Tubular handlebars with a modest pullback encourage an upright, slightly leaned forward riding position, rather than the chopper slouch. Hand controls are adjustable for reach with simple tools. Unlike the rest of the Harley lineup, the Street uses a left hand turn indicator switch, and there’s no automatic cancellation, which is a minor hassle.

The Street 750 fits in the Dark Custom family of bikes with minimum and ornamentation – just simple 3D chrome bar and shield logos on the tank sides and a minimum of shiny stuff. There are some blatantly unfinished, raw areas on the bike that I wish Harley had lavished more attention on. The wiring behind the steering head looks vulnerable and exposed; the horn is undressed and looks like an afterthought; and the underside of the tank looks squashed rather than formed to the heads. The mirrors are positioned so far inboard that it was impossible to adjust them to see vehicles directly behind me – all I got was my own shoulders or the next lane over. All issues that can be cleaned up by the aftermarket and a clever owner, but disappointing nonetheless.

I’m a longtime Harley-Davidson owner – I have a 1993 Sportster Deluxe that has been my city bike of choice for the last 20 years – so I was eager to see how the new Street performed on the road. Right off the bat, the light weight (489 lbs wet) impressed me. I could tell that at 6’2” with a 32” inseam I was in for a cramped ride. I’d have to alter the seat and move the foot controls in order to be comfortable on long rides on the 750, but the riding position is great for urban situations. With my feet underneath me it was fun to lift off of the seat when hitting a bump or pothole, without taking a shock to the spine.

The Revolution X engine performs with quiet efficiency, whirring and purring rather than clanking and roaring. It has a muted exhaust note, not unpleasant, just not really visceral or rich with bass. I’m sure that many owners will replace the stock pipes as soon as they buy their bikes – a venerable Harley tradition that has ruined many a good motorcycle. Power delivery is smooth and predictable, and the bike is quick without being overwhelming. Handling is nimble, never twitchy, making avoiding obstacles and executing tight maneuvers through the city very easy. Freeway speeds are no problem, either – just don’t expect too much protection from the flyscreen.  On those Texas roads, there were lots of bugs, but that's par for the course on a long ride.

The riding experience was somewhat of a throwback for me. It reminded me more of riding a Japanese cruiser than of any Harley-Davidson I’ve ever ridden. The center of gravity feels much lower than any Sportster, and the sound disappears from mind. The engine is solidly mounted to the frame (there’s an internal counterbalancer to quell vibration), but the bike doesn’t shake like my Sporty or even like a rubber mounted Big Twin.

A big upgrade over the Buell Blast

A blank canvas with the Harley-Davidson watermark

Just hundreds of dollars less than a Sportster

Budget levels of fit and finish

The Street 750 will be the first Street to hit dealerships, starting in late June 2014. The Street 500 will follow later – the first ones are headed to riding schools and the Harley-Davidson Riding Academy locations before being offered for sale. Harley is hoping that new riders will come out and learn to ride on the more sedate 500, then head to the showroom and buy a 750. There won’t be an easy way to upgrade the 500 to 750 the way that you can repurpose an 883 Sportster to 1200 cc, so choose wisely.

Before you plunk your money down on a Street 750 (MSRP $7,499 to $7,794) or Street 500 (MSRP $6,799 to $7,794), there are several other bikes to consider. If you want to remain more traditional, the entry-level Harley-Davidson Sportster Iron 883 starts at just $8,399, and is a blank canvas in terms of performance in a way that the Street just isn’t yet. Honda’s venerable Shadow lineup of bikes are known for their reliability and liquid-cooled V-twins. Suzuki’s Boulevard C50 gets an 805cc liquid-cooled V-Twin, and there are some cool variants. Don’t overlook the used market, either – a lot of riders start out on these bikes, then move on to bigger ones or special purpose bikes as their riding matures, and used bikes can be real deals.

As an entry into the Harley-Davidson family, the Street 750 is a definite step up from the old Buell Blast, Harley’s last attempt at a starter bike. It’s also friendlier than a Sportster, especially for smaller riders and beginners. I’m not sure if it’s the generation-bending revolution that Harley’s advertising wants you to believe, but it’s definitely a solid entry to the lineup. A little more polish would have been welcome, but I’m very picky about the details on my bikes. I’d definitely have to attack the ergonomics on the Street 750 before I could ride it every day. I’d need a taller seat; some different bars; I’d have to move the foot controls; I’d want to add some more custom details; in short, I’d have to make the bike my own, just like every Harley owner has done since the beginning of time. Maybe this is a “real” Harley after all.