Why I was wrong about MV Agusta

I’ve never been as wrong about a motorcycle brand as I’ve been about MV Agusta. Back in 2009, when the new generation of Harley-developed MVs was released, I criticized them heavily for posting inferior numbers to the previous generation while carrying over near-identical looks. I just saw a brand pushing a legacy, not a competitive product. But, since doing three trackdays on a 2010 MV Agusta...

I’ve never been as wrong about a motorcycle brand as I’ve been about MV Agusta. Back in 2009, when the new generation of Harley-developed MVs was released, I criticized them heavily for posting inferior numbers to the previous generation while carrying over near-identical looks. I just saw a brand pushing a legacy, not a competitive product. But, since doing three trackdays on a 2010 MV Agusta F4 last summer, interviewing the company’s 30-year old CEO Giovanni Castiglioni and now riding the MV Agusta Brutale 990R I can’t think of motorcycle company I’m more excited about. Here’s why.

I guess my negative perception of MV started back in 2004 or 2005 when I was living in London and dating a rich girl. Her 19-year old brother, in addition to his Lamborghini Gallardo, owned an F4 Senna. He rode it around in a t-shirt, a gold chain necklace about as close to safety gear as he got. That stereotype of MV buyer as someone with more money than sense was reinforced when I borrowed that Senna and found it barely rideable due to a recalcitrant front-end (it didn’t want to steer) and ridiculously awful fueling. Combine the two and riding it through traffic was a nightmare, especially since the brother would never have let me live it down had I dropped the damn thing. At probably three times the price of my more-powerful, better-handling Fireblade, I just didn’t see the point.

Honesty is a funny thing.

Then the new Brutale debuted in 2009 claiming, as my headline stated, “less power and more weight” than the model it replaced. That was followed by the F4, which appeared to make the same mistake. It’s since been explained to me, off the record, that while the spec sheets for the new models do appear unimpressive alongside those of the old models, that’s maybe due to varying levels of honesty between pre-HD MV and post-HD MV. Of course, admitting that would be admitting that MV hasn’t always been a model for ethical business practices...

What the hell is a Brutale 990R anyways?

It isn’t a naked F4. Different engine, different frame. But it is a roughly liter-sized inline-four in a steel trellis frame with significant sporting intensions.

It isn’t the same as the old, pre-Harley Brutale, even though they look strikingly similar. MV says this one is 85 percent new, with a revised engine, frame and most other parts.

As much as using the word “bargain” in reference to a $15,000 exotic Italian performance bike is inappropriate, until the MV Agusta F3 enters production in September (hopefully at a lower price), this is the cheapest model in the company’s range.

Eight position traction control is standard and you can switch between normal and “sport” throttle maps. Like other MVs, the front forks are ridiculously chunky. These are fully-adjustable 50mm USD Marzocchis. Out back is a piggyback Sachs monoshock, visible thanks to the single-sided swingarm.

But I want my exotic Italian engine to be a V!

Why? Because you want an easily-definable point of mechanical differentiation so you can brag about it or because you’re looking for character to justify the premium over a Japanese bike? So far as bragging rights, just tell people the engine’s radial-valve design was engineered by Ferrari. Character? Like the F4, to spend a significant amount of time using the 990R’s engine is to learn to love it. It’s turbine smooth, hits hard when you open the throttle at any RPM in any gear and even though it’s an inline-four, it has an engine note all its own.

The 990’s motor is way more suitable for a naked bike than the 186bhp 998cc engine in the F4. Where the superbike loves to rev, encouraging you to bounce if off the limiter when you’re riding fast, the Brutale delivers considerably more punch just off idle and through the mid-range. That comes at the expense of the liter biker’s top-end rush, but you’ll be too busy having fun at sane speeds to care.

But, I’ve learned that I shouldn’t just draw conclusions from MV spec sheets, so I asked the company to explain things better.

Ok, but it’s Italian, it must have some foibles.

Here’s the procedure for switching between Sport and regular throttle maps: Start the engine; hit the “set” and “ok” buttons while scrolling through a series of indecipherable sub menus; get frustrated and give up; pull away; pull an unintentional wheelie; smile; remember that it’s the start button you use to change modes; hit it; watch “sport” flash on the screen; watch it disappear; hit it again; hold it; almost run into the back of Grant on the Aprilia RSV4; hit it some more; hold it some more; give up; look at the screen again a few minutes later and notice that you’re now inexplicably in Sport. To reverse the selection, repeat the process. Good luck figuring out how to change the traction control settings, we couldn’t figure them out on the F4 either.

Then there’s the shotgun exhausts that look amazing, but get in the way of your heel if your toes are on the pegs. Fortunately MV realizes this and covers the pipes in all manner of heat shields to prevent your boot melting. 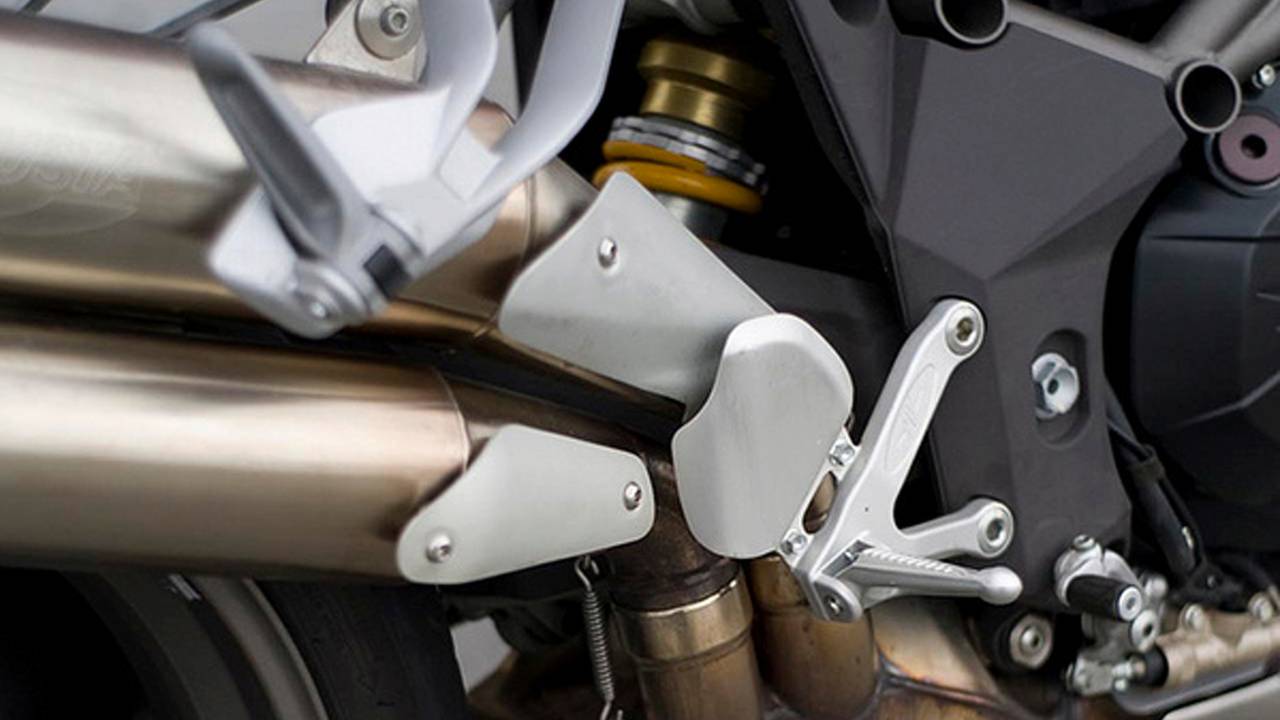 But since it’s Italian, it must also handle.

Correct. Climbing off something like the BMW S1000RR, the suspension feels a bit soft, but very well controlled. Feel through the flat bars of what the front tire is doing is exceptional, meaning you can throw it into corners hard with a level of abandon only complete confidence brings. The steep steering angle helps with that too. The trick is to trail it into corners on the brakes to keep the front end planted and to quicken the steering even further.

Despite that fast steering, it’s still stable. In fact, the whole thing feels almost Japanese in its accessibility and ease. Just get on it and ride, you’ll have fun and it won’t throw you off.

Will it wheelie, mister?

While I’m coming clean, I might as well admit that I don’t like pulling wheelies. Riding someone else’s fancy press bike, especially one I can’t afford to replace, always leaves a nagging feeling in the back of my brain, urging me to close the throttle if the front wheel starts coming up. But, I had the Brutale’s front wheel in the air within about 10 yards of my first ride. The upright riding position, the short wheelbase, the immediate torque and the very sharp throttle response just encourages that sort of thing.

Seriously, it’s easier to wheelie than a Triumph Speed Triple, and that’s saying something. 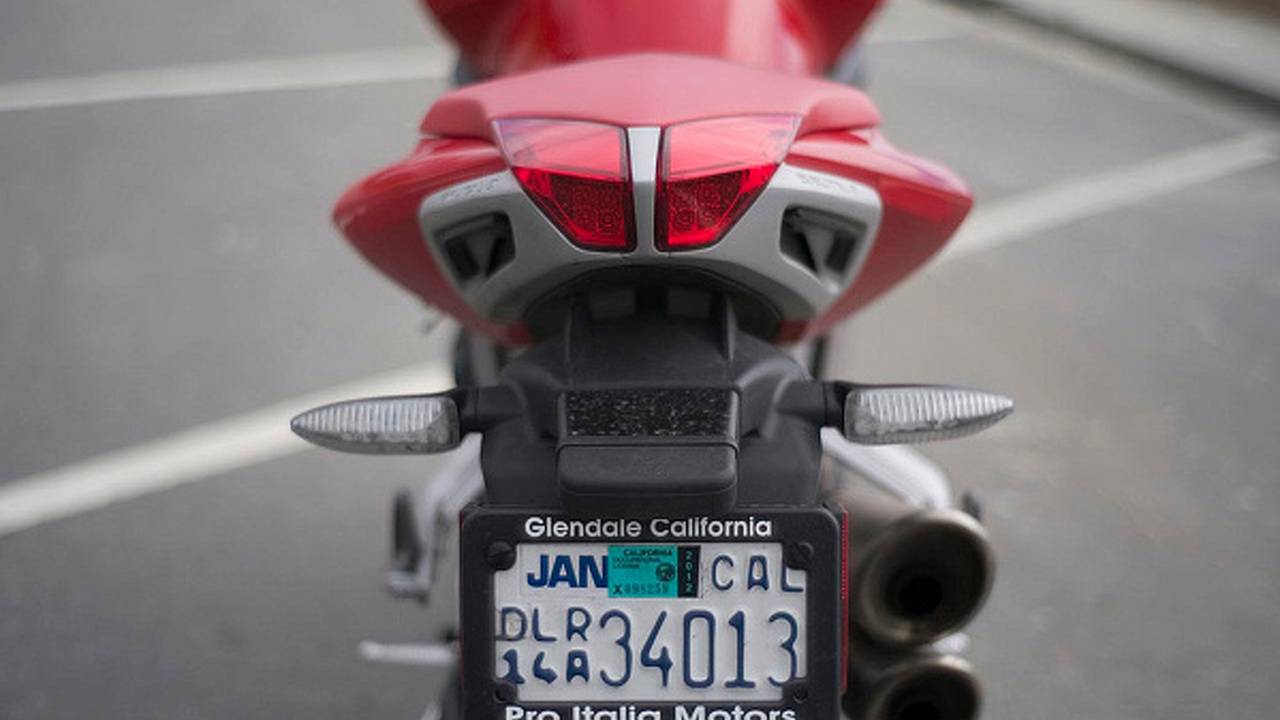 The company? I’ve interviewed and talked to pretty much everyone doing something remarkable in the motorcycle world right now and you know who appears to have their shit together the most? Who appears best able to cope with the sea change affecting bikes right now? Giovanni Castiglioni.

Combine the prestige of the brand, the looks of a Brutale, the performance of a superbike, the quality of a Harley-financed factory and the cheapest price of the range and you have the Brutale 990R. It’s fast, involving, accessible and desirable.

I guess my problem all along was that I didn’t understand MV’s unique selling point. Were they just GSX-R clones with a higher price tag? Just Ducatis with inline-fours? No. Now I understand. MV Agusta’s USP is awesome. Pure awesome.