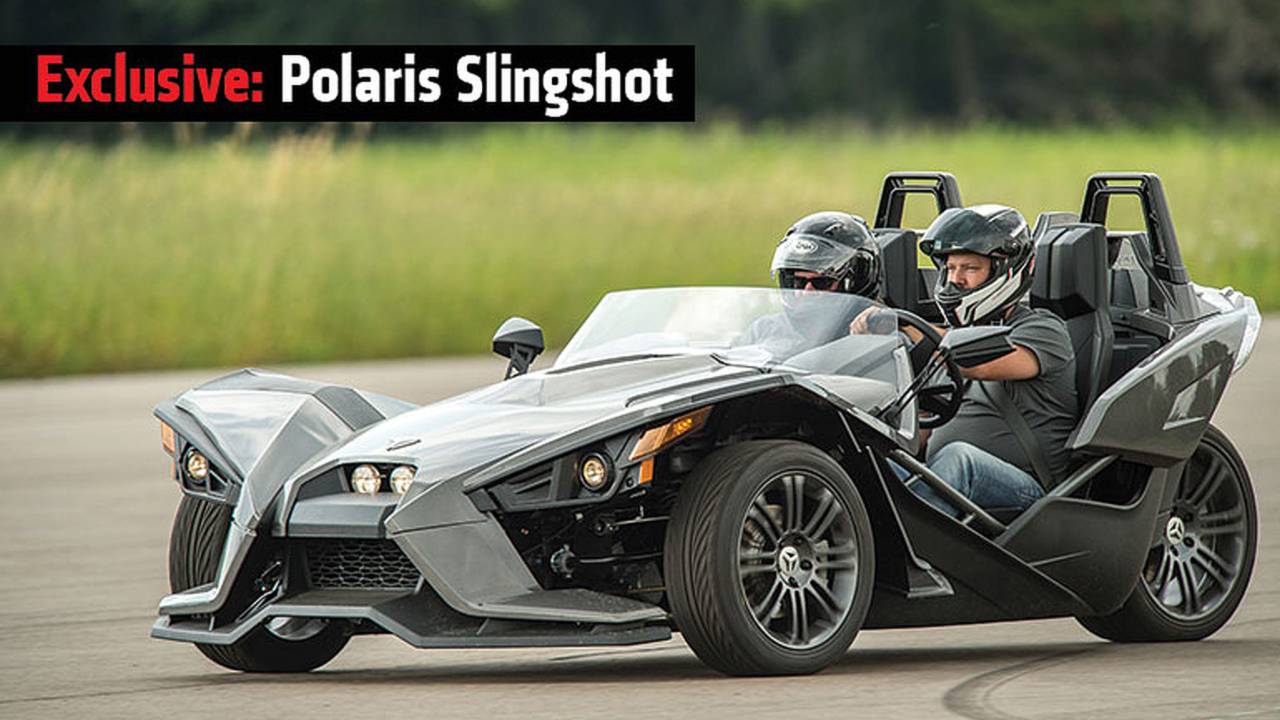 Last week, I traveled to the Polaris Product Development Center in Wyoming, Minnesota to see some new products. Polaris makes a wide range of powersports equipment, including Victory and Indian motorcycles, Polaris snowmobiles, side-by-sides, ATVs and GEM Electric Motorcars. Polaris invited me in to get a first look at the first Polaris motorcycle, a three-wheeler called the “Slingshot".

The Slingshot is unlike any motorcycle I've ever ridden, with two wheels up front and one in the rear. That may sound like the Can-Am Spyder -- but the Slingshot is an entirely different animal.

At first glance, the Slingshot looks for all the world like an exotic car. It has an open cockpit, and angular polymer body panels that define a low, wedge-shaped profile. The bodywork hangs on a tubular steel frame, dressing the vehicle without attempting to conceal its skeleton. It's got three headlights, a lower air splitter, and two big exposed car-like 17" x 7" wheels (18" x 7.5" on the SL model) connected to the power-assisted rack and pinion steering with double wishbone suspension, coil over springs and a sway bar -- very performance car-like.

Do not trust your eyes.

The 2015 Polaris Slingshot is not a car. It is a three-wheeled motorcycle.

This distinction is very important to Polaris, and it's very important to the U.S. Department of Transportation. Because if the Slingshot was a car, it would not exist. It would never be street legal. If it was a car, it would have to be loaded down with airbags, bumpers, crash protection, a collapsing steering column and other car safety equipment. It would have to be crash tested. It would never have made it past the development stages at Polaris, because the costs would have been astronomical.

The Slingshot has none of those things.

The Slingshot is a motorcycle, and requires a motorcycle operator's license or endorsement in order to be ridden on public streets. Drivers -- I mean riders -- and passengers will have to conform to motorcycle helmet laws. The Slingshot will be eligible to be licensed and insured as a motorcycle in all 50 states, and presumably will be entitled to the same privileges (what few there are) that are accorded to other motorcycles, like access to carpool and HOV lanes, reduced tolls and motorcycle parking.

Back to your eyes. They still tell you that you're looking at a car.

The Slingshot seats two riders side-by-side in its weather-proof open air cockpit. Riders sit in adjustable seats that look more like car seats than saddles, complete with a pair of three-point safety belts. The pilot sits on the left, and uses automobile-style hand and foot controls to drive/ride the vehicle. There's a tilting steering wheel, three foot pedals (clutch/brake/throttle) and a manual gear selector/stick shifter on the center console. There's a locking glove compartment, and two locking storage compartments (one behind each seat).

Still looks like a car. Ignore the signals from those lying eyes.

Out back, the single 18" x 9.5" (20" x 9" on SL) wheel wears proprietary Slingshot-branded Kenda rubber with symmetrical tread. An aluminum swingarm connects the wheel to the frame, and a carbon-fiber reinforced final drive belt conveys power to the wheel. In isolation, the rear wheel rig looks very motorcycle-like. That makes sense.

Under the front-hinged hood, a car-derived powertrain holds court. It's a GM Ecotec 2.4-liter inline four-cylinder gasoline engine with liquid-cooling, dual overhead cams and variable valve timing, tuned to produce 173 hp and 166 lb-ft of torque. The engine is hooked up to a conventional five-speed manual transmission with a reverse gear. The Slingshot can carry 9.77 gallons of gas in its tank, and it prefers 91-octane Premium.

Enough talk. What's it like to drive/ride the thing, you must be asking by now.

It's a hoot. I don't care much whether the Slingshot is a car or a motorcycle, to be honest with you. It's light (about 1,725 - 1,743 lbs, depending on equipment), it's very low to the ground (5.0" of clearance and a seat height of about 11") and it feels incredibly fast. I don't know what the 0-60 figures are -- I'd have to guess that it takes about 5.0 seconds to get up to speed -- but the sense of speed is amplified by the proximity to the pavement. You could easily reach out of the Slingshot and drag your knuckles along the ground if you wanted to (why would you? I don't know, but you could).

Because of the geometry of the front end, cornering is incredibly well controlled. All three wheels stay on the ground, even in an aggressive drift. Standard traction control, electronic stability control and anti-lock brakes do a great job of keeping things sane. I rode shotgun with a pro driver on a skid pad, and he demonstrated how even while smoking the rear tire with traction control turned off, the Slingshot maintains its composure, behaving predictably and manageably.

Speaking of riding shotgun, one of the unique strengths of the Slingshot and a major attraction will be the side-by-side riding position. It will not be difficult to convince friends, dates, even hitchhikers to ride along in the Slingshot's comfortable passenger seat, and if you equipped your lids with helmet-to-helmet communications, you could even have a conversation while riding together. There's no learning curve for the passenger, and no pillion shame, either. Just a whole lot of fun.

There will be two models of Slingshot available at launch. The base model ($19,999) comes in Titanium Metallic and gets 17" front wheels and an 18" rear wheel. The Slinghot SL ($23,999) gets 18" front wheels and a 20" hoop in the back, and arrives slathered in a coat of red paint. The SL has a blade windscreen, six speakers and a media console with a 4.3" LCD screen with a backup camera and Bluetooth integration. Polaris will produce a mess of accessories for the Slingshot -- they're very good at that. And if 173 hp isn't enough for you, there are plenty of aftermarket providers who have figured out how to get more power out of that GM lump, if you are willing to wait out (or void) the 2-year warranty from Polaris.

There are a few three-wheel motorcycle competitors out there. There are trikes (one wheel front, two wheels rear), a few conversions like the Tilting Motor Works that I wrote about last week, and there's the Can-Am Spyder with two wheels front/one rear and inline seating. The $54,000 Morgan 3 Wheeler is an English car with a V-twin engine, two wheels front/one rear and side-by-side seating -- can't wait to try that one, but I expect a much more sedate experience than the Slingshot. The $65,000 Campagna T-Rex is probably the closest competitor for the Slingshot, running with a BMW1,600 cc motorcycle engine and a motorcycle transmission.

I could see using the Slingshot as a fun weekend ride, or even as a sleek commuter. I have to quote Polaris one more time, just to reiterate: "Slingshot is a 3-wheeled motorcycle. It is not an automobile, it does not have airbags, and it does not meet automotive safety standards." When you ride a Slingshot, you're assuming the same safety risks that you do when you ride a motorcycle, so don't get lulled into a false sense of security because there's some bodywork around you. This is a very risky vehicle to ride, just like any other motorcycle. It's low enough that it could go unnoticed by larger vehicles in certain situations; and it is definitely fast enough to cause some real damage to its riders in an accident. If you're willing to assume the risk, manage it carefully and you can have a thrilling ride.