The 2012 Suzuki V-Strom 650 might not be the sexiest motorcycle out there, but it is the most broadly capable we’ve ridden.

What makes a motorcycle good? Is it big horsepower numbers and a long list of novel technology? Its ability to triple the highway speed limit? Is it presence in a TV show or its ability to impress your buddies on a motorcycle forum? This new 2012 Suzuki V-Strom 650 has none of that. When it leaked last year, we even called it boring. But, after spending over a month on it, that opinion has changed totally. The V-Strom might not be the sexiest motorcycle out there, but it is the most broadly capable we’ve ridden.

I didn’t want to ride the V-Strom. Totally content with the Triumph Tiger 800 XC I’d been cruising around on for a while, I didn’t even realize Sean and Grant had added it to our fleet. Then, while we were in Portland, Triumph picked its bike back up and I was left to hop back on whatever was waiting for me in Sean’s garage. It turned out that bike was the V-Strom. 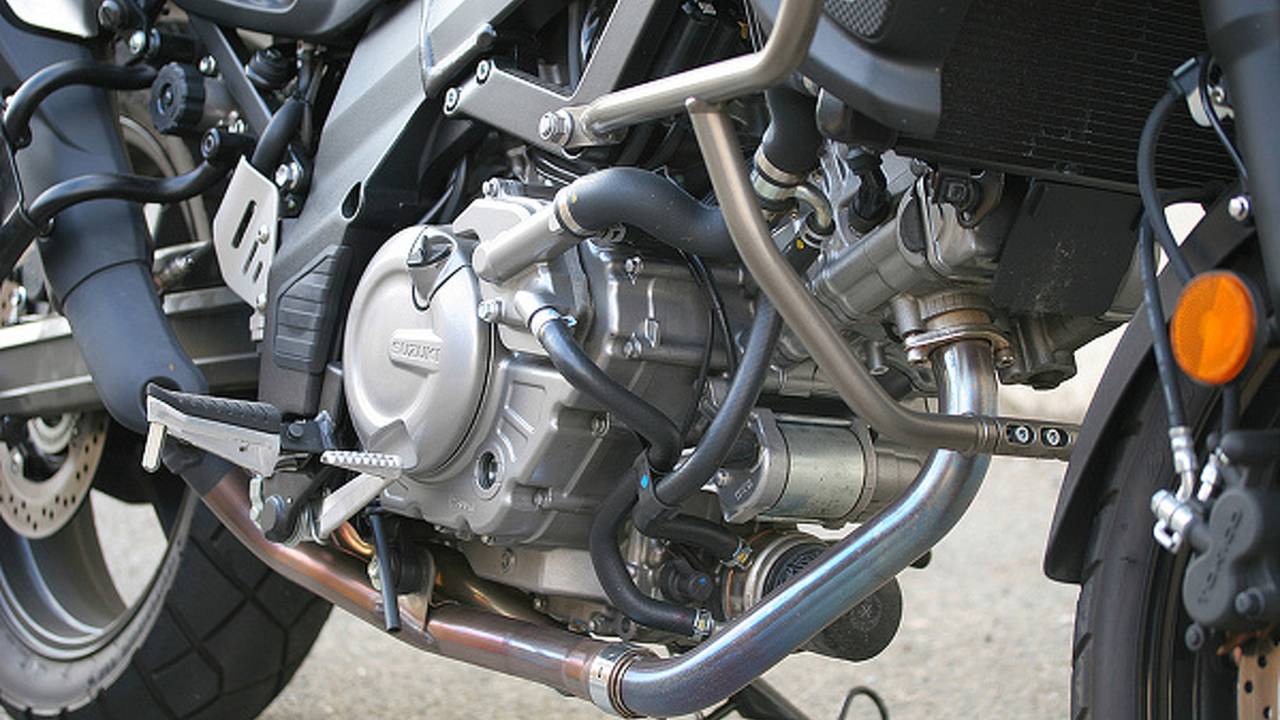 Someone at Suzuki's design center forgot to sweep up.

Not so much plain as just hideously ugly, the Suzuki suffers from an unfortunate visual combination of Dame Edna headlamps, a hefty use of woefully fake carbon fiber, dumpy proportions, ugly mechanical components and just a general air of cheapness. In all black, at least, it’s so boring that you forget you’re looking at it.

That brings its own benefits. Running from Hollywood over to Inglewood the other day, to service one of Sean’s bell rings, I was too busy busting traffic to realize I’d entered a 25 zone in a neighborhood. On the wrong side of a double yellow, passing a line of stationary traffic, well over the speed limit, I passed a motor cop coming the other direction. He didn’t even blink; I don’t think the V-Strom even registered in his consciousness.

And running around is what the V-Strom has been doing. Grant needed to run up to Willow Springs, an hour and a half of highway riding away, to scout a shoot we were doing. Did he take the KTM 990 Adventure, Aprilia Mana GT or that Tiger we had laying around? Nope, his go-to for highway comfort was the humble Suzuki.

Two weeks ago, I had to run to Brea so a 6’ 5” Frenchman could return a bike to the Victory dealer there. 45 minutes there, then an hour back, two up, with 385lbs and 12’ 7” of international bike journalist on board, through heavy LA rush hour traffic. After spending 30 seconds maxing out the rear preload via the handy remote adjuster, the little Suzuki didn’t just perform admirably carrying that load, it turned out to be probably the best passenger bike I’d ever ridden. Enough, that by the time we arrived home, David exclaimed at least six times, “I can’t believe I’m alive! I can’t believe I’m alive!”

The huge seat, low pillion pegs and enormous grab handles help there, obviously, but more important is the ability of the chassis to remain composed even carrying such an extraordinary load. Just a 68bhp 650, I was worried about the engine and brakes being up to the task too. I shouldn’t have been. From the first 1mph ride across the dealer’s parking lot to turn onto the road, it was clear that the V-Strom was going to remain utterly composed even with two big dudes on board. That remained true at 100mph, nearly fully leant over on a nice on-ramp and splitting up a gridlocked 101 at low speed to get home. The V-Strom was absolutely as good two-up as it is solo.

The single best thing about this bike? The brakes. They’re not radials, there’s no braided steel lines, even Suzuki’s official spec sheet doesn’t make must mention of them, just listing “Disc brake, twin” in place of the typical marketing hullabaloo. There’s humble twin Tokico sliding calipers up front and an ABS sensor ring. It’s the latter that makes the difference. Squeeze the front lever as hard as you can, stomp on the rear, and the Suzuki just stops. No drama, no vibration, no weird feedback from the ABS unit. These are some of the most reassuring, powerful, easy-to-use motorcycle brakes ever. Reasonable quality damping means the front dives in a controlled manner while delivering excellent feedback through the Bridgestone Trailwings. 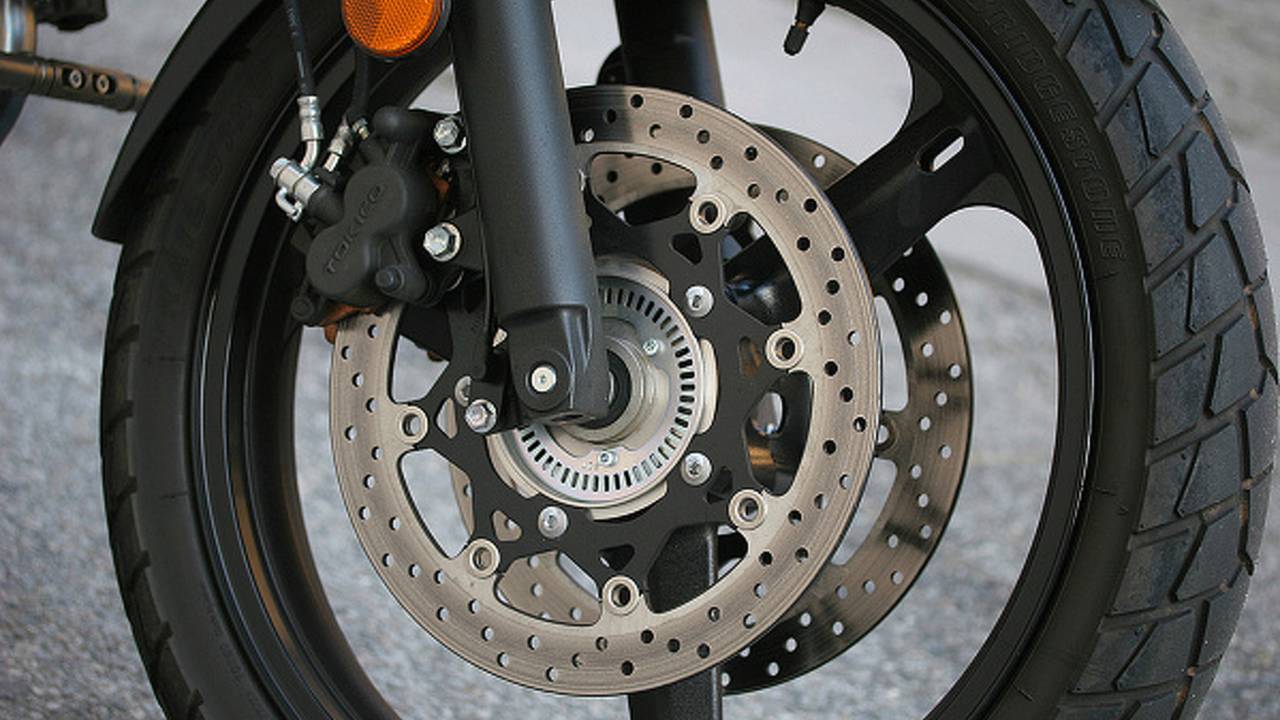 The brakes work equally well when you’re not panic braking too. Again, good damping and excellent feel through every component just equals complete confidence. That’s true trailing through high speed mountain corners, between lines of traffic in town or just before that cop with the radar gun sees you on the highway. If you’re not a believer in ABS on motorcycles yet, just try the V-Strom and prepare to be a total convert.

What Are You Riding Mister?

Ok, there’s not often a “mister” in the question, but you know how it is. Roll into a party or a restaurant or a bar or a whatever with a helmet and, invariably, another male is going to attempt to gauge the size of your penis in comparison to his own by asking what type of bike you’re riding. While an accurate answer would be, “Whatever it is, it’s faster than your car,” I’m resolved to be less of an asshole this year. So, instead, after “V-Strom 650” meets blank stares, I proceed to bore my potential new friends with a 10 minute explanation that goes something like this:

You see, Mr. Averse To All Risk, not every bike is either a Harley or a crotch rocket. There exists among motorcyclists a curious subset of riders who actually use motorcycles as their sole means of transportation. Yes, you can still ride in the rain, you just get a little wet. Well, we wear clothing that protects us from crashes and weather and stuff. Here, punch my back. Yeah, sorry, that looked like it hurt. See? Well, some bikes are made to be good at that transportation thing. You can take them on long trips and they’re comfortable and you can go grocery shopping with them and ride them to work. Did you know I get better MPG than your Prius? Yeah, Hybrid’s get 0mpg when they’re sitting still. No really, they do. Trust me, I used to write about cars. No, I don’t want to explain why, it’s boring. Oh hey look, a pretty girl.

All that’s much more impressive when I’ve got some flashy sportbike or a GS or something. But it doesn’t matter, they’re just jealous that I get to wear a leather jacket.

As Fast as Possible

The other day, it wasn’t some random car driver asking, it was Adey, who apparently managed to walk into the Bourgeois Pig without registering the V-Strom parked immediately adjacent to the front door. He knew what a V-Strom was when I told him, you could tell because he looked a little sorry for me. So then I explained that I’m probably faster around town on it than anyone is on their sportbike. Now, I’d never want to try and prove that to Adey, someone who lives like losing isn’t an option, but I stand by that statement.

Around the city, fancy tires are no good. They’ll never warm up and hate even the faintest hint of moisture. The V-Strom’s Trailwings grip solidly from cold. Around the city, ass up and head down just leads to uninformed decision making and sore wrists. Meanwhile, for the last month, I’ve been looking over cars. The Suzuki’s wide bars make for extremely fast, accurate steering and there’s a huge amount of lock for carving up difficult lines of stationary cars. The engine might only make 68bhp and 44lb/ft, but is smooth, eager and easy to use. I can give it full throttle pretty much anywhere and rev-matched down shifts are easy to get perfect, every time. Somewhere in the aluminum beam frame, RWU forks and linkage shock, Suzuki’s installed more confidence than you’ll find in virtually any other motorcycle. Just pin the V-Strom and go, it’s as fast as you’re willing to take it.

A New Model, Mostly in Name

Changes to the V-Strom for 2012? Different suspension damping, a different fairing a new seat (probably the comfiest bike seat out there) and the motor from the Gladius, here tuned for a little more low and mid-range. Yeah, that’s not much. But, somehow, it’s also everything. The engine is now much smoother and generally just feels larger than its spec sheet suggests. You’ll mostly ride along using the mid-range torque to effortlessly pass traffic, even in 6th gear. You’ll have to keep reminding yourself that it’s just a 650, the ease with which it wafts along on that 44lb/ft of torque feels much more like a 1,200cc air-cooled twin.

The model you see here is the $9,799 V-Strom 650 Adventure. Over the base $8,299 model it gains aluminum panniers, crash bars and a big windscreen with an adjustable lip. We’d spend that $1,500 on aftermarket parts instead. That amount of money will get you further shopping online and, while those aluminum cases sure are nice, they’re freakishly wide. Not a huge problem for people unfortunate enough to live where lane splitting isn’t legal, but they essentially make the bike as wide as a car. That’s why they’re not pictured here, we haven’t been using them at all because they’re just too wide. The crash bars seem curiously spec’d too; they look as if they’d protect the radiator well in a topple over, but we’re mostly concerned about ripping the exposed oil filter off on an obstacle off-road. A skid plate would be our first protection upgrade.

Grant took the V-Strom to the trails off San Francisquito canyon north of LA and reports that, wearing road-biased tires, it’s pretty much as capable as any other ADV bike. Which is to say: stick to fire roads. There’s no ABS off switch (you can always pull a fuse), but the brakes are still plenty capable of stopping you on the dirt; plus you’re never going to lock up the front and topple over. 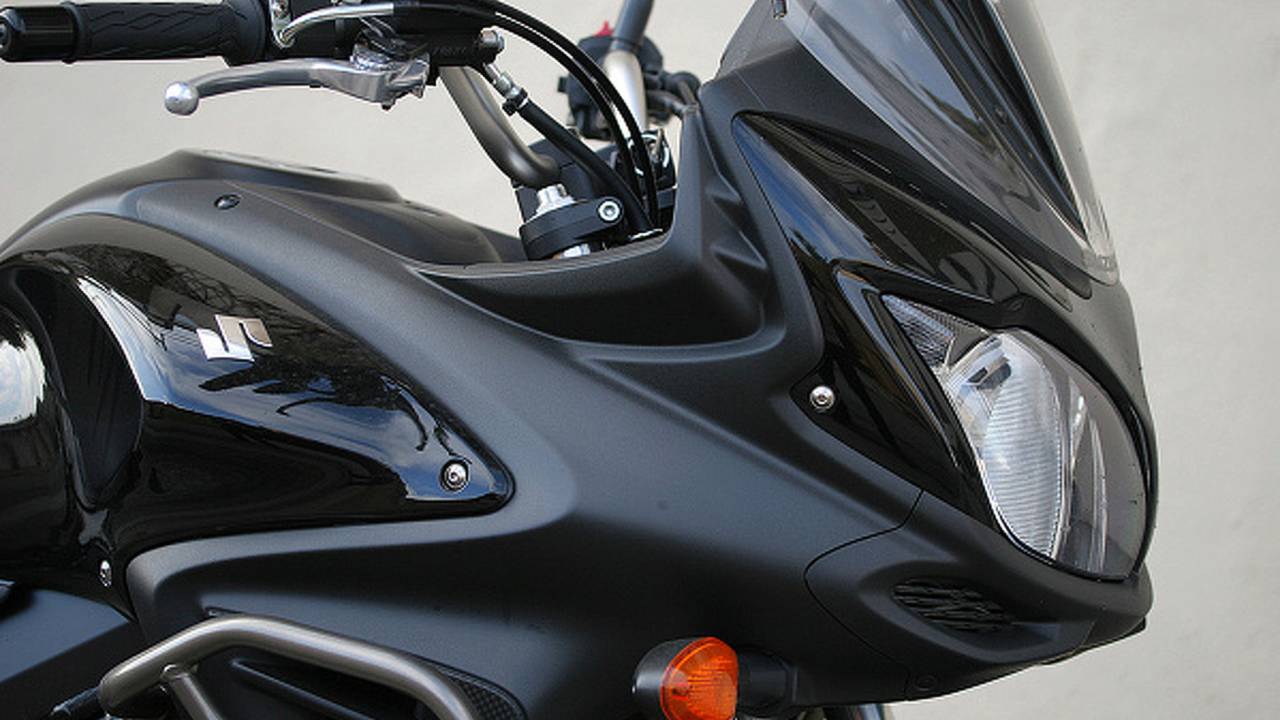 Nothing More Than Necessary

At $8,299, the base V-Strom is extremely competitively priced. Way more suited to long distance stuff than the $7,899 Kawasaki Versys and just as fun around town. Considerably cheaper than the $10,999 Tiger 800, just as capable at most things and more capable at distance, if not quite as much fun.

But, this is such a good bike, that you end up wishing Suzuki would have taken the time to make it even better. At 472lbs, it’s the same weight as other mid-capacity ADV-style bikes, but you feel more effort could have pared off more of that weight, leading to better performance on-road and off. Neither are the slim, compact dimensions of the v-twin taken advantage of; the V-Strom isn’t particularly narrow or compact. Perhaps the best visual indicator of this feeling comes when you look through the huge gap around the forks, into the unfinished inner side of the front fairing. Taped up wires are left dangling loose behind raw plastic; Suzuki put no more effort in than was strictly necessary.

The V-Strom 650 is a wonderful motorcycle. It’s fun, fast and easy around town. It’s relaxed and comfy on the highway. It’s great two-up. It’s cheap and it has what are probably the best real-world brakes and most comfy seat in motorcycling. If you’re looking for a practical commuter, tourer or do-it-all, all-weather bike, then look no further. If you’re looking for something that will make you feel special, look further.