3 Things I Learned At The Aerostich Pop-Up Event 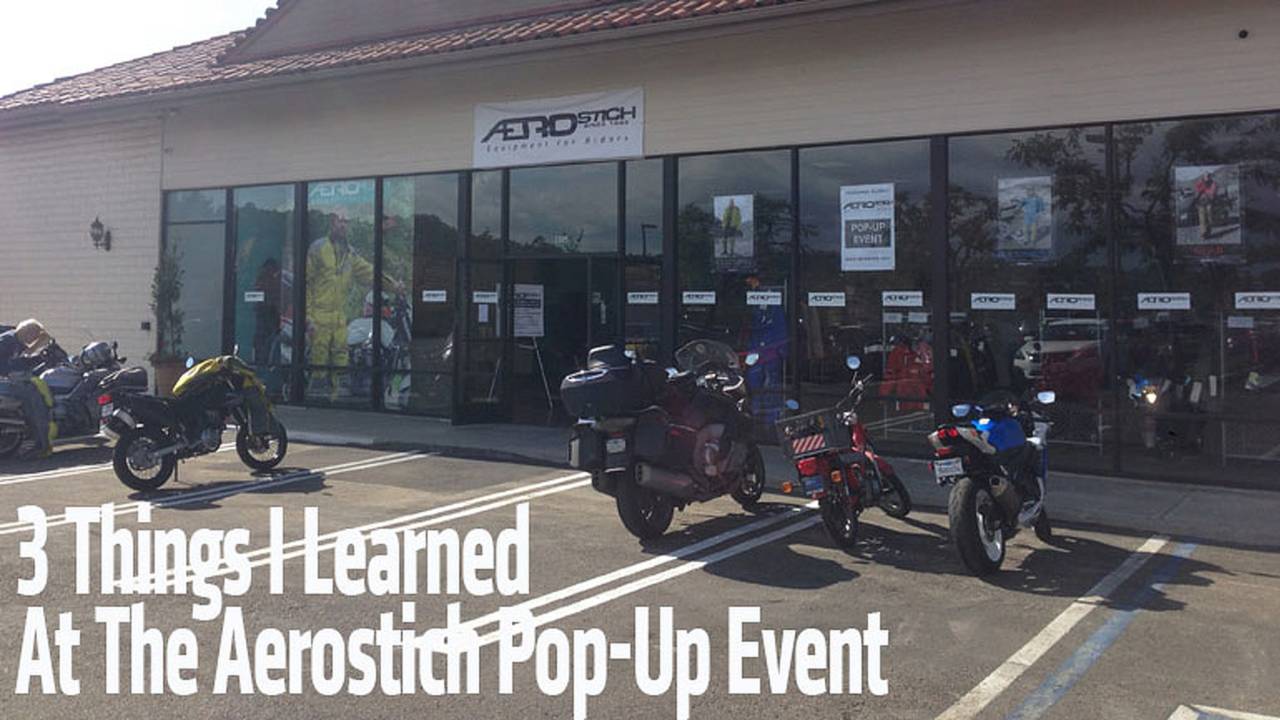 Three things I learned after attending the Aerostich Pop Up event in Oceanside, California.

If you’ve been reading the site in the past week or two, you’ve noticed we’re giving away a different piece of Aerostitch gear a week until the end of December. If you’ve been reading the site longer, you know we here at RideApart we are huge fans of Aerostitch and the gear they produce. I got a chance to go to the first day of their SoCal pop-up shop event, and here’s a little bit about what I learned.

#1 You Meet the Nicest People

“You meet the nicest people on a Honda,” was a famous ad campaign that helped to launch Honda ahead of the pack in the early 1960’s. Honda is far too massive for that to remain true for them, but Aerostich has taken up the torch by being, and encouraging, general all-around goodness.

The moment I walked into the shop, I was greeted and told how the shop was divided, and that the bikes in the shop were there to sit on and to see how the suits moved in a riding position.

The other shoppers were nice as well. One told me about his experience with the two-piece suit when I picked it up (he was there to add the one piece to his collection), and another commented about the Roper Gloves when I picked up a pair. I was then greeted by a few people who read the RideApart website each day and they, instead of being of the YouTube variety, were actually young, smart and the kind of motorcyclists I’d actually want to ride and hang out with (I expect emails from you guys by the time this is posted.)

I was expecting a parking lot full of huge shiny BMW’s when I arrived in the parking lot. What I got was a parking lot full of the dirtiest hodgepodge of bikes I’ve ever seen…. and it was beautiful. I suppose it shouldn’t have been a surprise, if you’re going to invest in Aerostich gear you probably have good reason. It was nice to see a lot of variety in the kinds of riding everyone was doing and it created a unique atmosphere in the room, looking around at other people who I respected as peers.

#3 The Aerotich Team Are On Point

Aakash Desai, our Aether Moto Urban Adventure winner, met me down at the event to get fitted for a suit. After I got a chance to browse, I also spent some time speaking with some of the Aerostich team, and then I got to watch as they took Aakash through the whole process of fitting him for a riding suit.

Aakash trying on a two-piece Roadcrafter.

Kyle Allen from Aerostich who was helping Aakash, guessed his size right off the bat. He then pulled the one and two-piece options from the rack and instructed Aakash how to put them on (it can be a bit confusing the first time). He then asked Aakash a series of questions, about multiple reference points, regarding how the suit fit. Kyle walked us over to a few different bikes, helped find the one that was most like Aakash’s Bonneville, and had him sit on it in his regular riding position where he asked additional questions about how the suit fit on the bike.

It was obvious, from the time that Aakash and Kyle shook hands until the time that he helped Aakash write down his order, that Kyle was a guy who’d ridden thousands of miles in the various Aerostich gear and could answer any real world question asked by rider. These are the same kind of questions or comments we here at RideApart answer when reviewing gear.

Aakash fitting part 2: seeing how it fits on the bike.

With the event mostly over I rode home, only to find a new, custom fit Aerostich Roadcrafter Light waiting for me on my doorstep. I’ll be reviewing it in the coming weeks to correspond with our grand prize giveaway in December. We’ve worked with a lot of companies that provide a custom fit and almost all of them refuse to let us send them measurements out of a fear that it won’t turn out right, which will then show up in the review (understandably). Aerostich had no such fears and, now that I have seen the proof, I understand why. My Aerostich suit fit perfectly.

If you can’t attend an event like the one I did, just follow the instructions for ordering on the Aerostich website and get ready to enjoy one of the best pieces of gear you’ll ever own.

Do you have a custom Roadcrafter? Tell us about your experience in the comments below.

Contests: Participate In A RideApart Contest