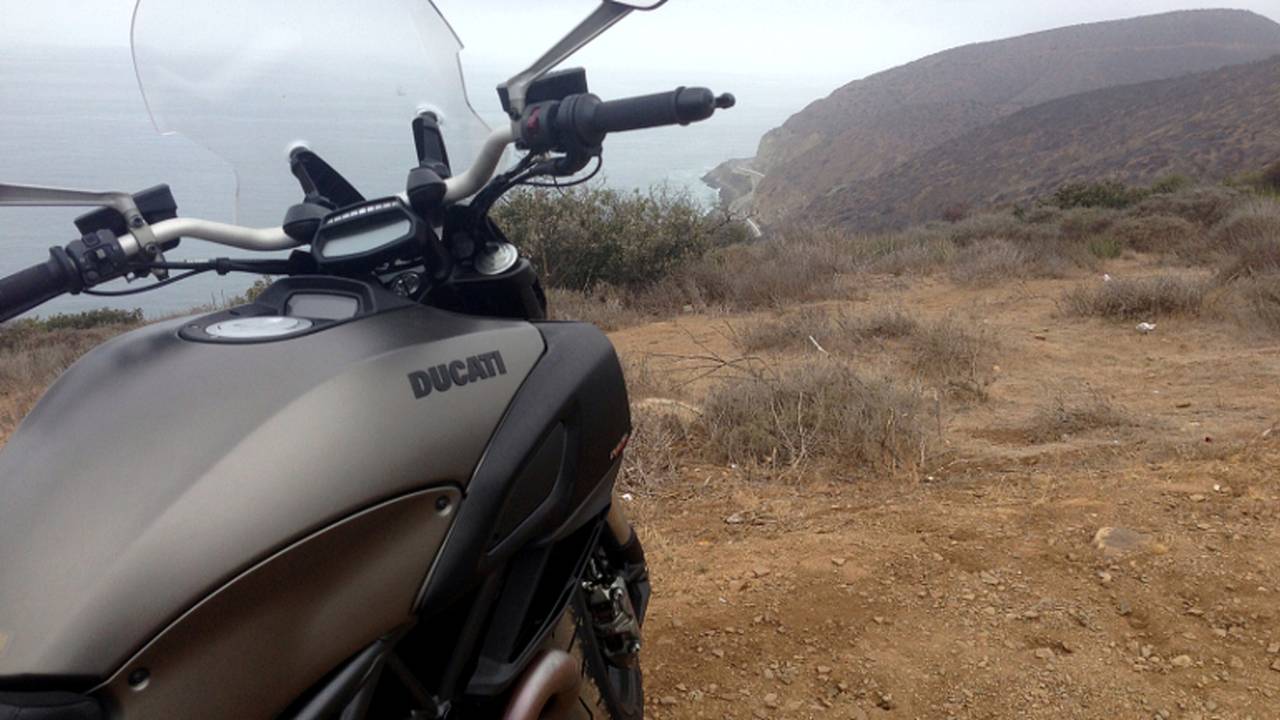 EVERYTHING. Ok, so not everything. But the Diavel Strada is a "new" bike for 2013, coming in the form of a touring oriented adaptation of the launched-in-2011 Ducati Diavel. The Diavel Strada get both a windscreen and side bags, while the bars, seat, and pillion seat have all been adapted for the bike's new purpose. The bars are now swept up and come in at 0.6 inches higher and 2.36 inches back towards the rider. The seat received some additional foam padding and the pillion seat got a back rest, new grab rails, and slightly adjusted foot pegs. Electronically, the Diavel Strada got fancy heated grips and auxiliary power outlets. All of these additions and the Diavel Strada comes in at just 13 pounds heavier than the Diavel.

While I'd hoped to take this "touring" version on an official tour of some sort, my schedule didn't allow me to get away for more than a day so the most I was able to do was 2, 200-250 round trip days around Southern California. The first, down to Julian to the Julian Pie Company (because I love pie more than most things) and the second to see friends playing a certain music festival in Ventura this past weekend (which I'll leave unnamed because people my age aren't supposed to like that sort of thing).

The first thing I did when I got home from picking up the bike was to remove the windscreen. I had a good deal of buffeting and it gave my new Schuberth C3 Pro (the quietest helmet I've ever worn) boom quite loudly. I spent the first part of the week commuting with it to LA and back, and that weekend to Julian, because it's always a wonderful day for pie.

Around town, the bike turns a lot of heads. More bluntly, I've never been hit on more or gotten more attention from girls on any motorcycle, which really surprised me (keeping in mind I wear a full face helmet and they can't see my face). Harley guys liked it and felt like the lines of the Diavel were similar to their bikes, while other people really noticed and liked the different materials and finishes of the bike. And the SOUND.

Now, I haven't ridden the regular Diavel so feel free to correct me, but the bars seemed to make a bike that already has somewhat of a difficult time turning more difficult to turn. Around town, this is just something to be mindful of and will keep you looking a little less than smooth, but is nothing to really worry about safety wise.

The route to Julian is mostly freeway down the 5 until you hit the 78 where it gets more and more rural until you're on some brilliant windy and clean roads out near Palomar mountain where I got to ride the Hayabusa. The freeway on the Diavel, sans windscreen, was not an enjoyable experience. The bars are just a little higher than I would have liked, keeping my arm in a position where I had to use my forearm muscles to hold onto the bars. Without the windscreen, the bike is fantastic to ride around town, but on freeways you become a sail. Once we hit the slower, twisty stuff, I was glad to be without the windscreen but still struggled because the bike just does not want to lean over. It will do so if you force it, but it really becomes a battle of wills if you want to try and do anything athletic on it. Luckily, the brakes are fantastic on the bike and give you the ability to easily manage your entry speed, keeping you from any sticky situations provided you ride cautiously. At least the Diavel Strada makes an excellent pie carrier.

I decided it was only fair to put the wind screen back on for my second week with the bike, at least for the sake of being a responsible journalist. While I missed having an open view of the road and did not enjoy the boom it gave my helmet, it did not induce the buffeting I had previously for the remainder of the week except for one particularly windy section of Hwy 1 in Malibu, so I guess I won't really blame Ducati for my experience riding the bike home initially.

I appreciated the extra wind deflection my remaining days commuting to work with it, and the boom wasn't terrible as long as I kept my speeds low. On Sunday, I rode to Ventura to see friends who were playing a music festival and decided to take Hwy 1 up. Sunday mornings are one of the only times you can catch LA freeways without traffic on them and the bike is much more comfortable to be on at speed with that windshield on and the wind sail effect turned off. I had similar problems with the handling on the twisty sections of Hwy 1, especially when riding quickly to pass in the sparse passing lanes.

I will say, people assume you know what you're doing or you're an accomplished human being when riding a bike that looks this nice (read: expensive). By the time I got up there, they were already making cars park about a mile away. I was told to say "I'm going to the production lot" despite not having any credentials and each cop or venue employee I encountered didn't blink, despite my having seen them turn away two guys on a Harley who had been 2oo yards ahead of me.

A few too many hours on my feet, too many bustling teenagers who can't figure out how to walk without bumping into people, and dropping temps and I headed home a little earlier than planned. My 90 mile ride home meant 88 miles of freeway and the bike absolutely ate the miles. The seat is decent, but I would like to see them make a gel seat like the one for the Multistrada for a bike like this. The heated grips (operated by pressing the starter) kept my hands at a nice temp while the windscreen kept me comfy the whole way home.

The fit and finish of the bike are beautiful. The bike is definitely an eye catcher and evokes a reaction.

The power is incredibly fun, especially if you're in a straight line.

The bike is relatively comfy (which coming from someone who's never comfortable means you will all find it extremely comfortable).

The dual displays give you tons of information, though I wish they would include a gas gauge if they're going to include everything else.

The windscreen is a nice addition, though I feel they could have spent more time on its design, and the bags are useful for day to day stuff, but their size (a reported 10 liters) keeps them from being very good for any real touring.

The gas mileage is decent (I averaged 41 mpg with a range of 150 miles or so during my two weeks with it) for a bike that makes that much power that is that addicting to use.

I've already covered most of this, but for the sake of thoroughness, the windscreen is poorly designed and provides a decent boom in an otherwise silent helmet, as well as some buffeting.

The bags are more useful than nothing, but too small for real touring.

The headlight (the same or very similar to the one used on the Monster) is incredibly bad, especially when you introduce two different displays on the dash that are too bright and make the light thrown by the headlight appear even worse in contrast.

I really didn't like the position of the bars, but that could be more of a personal issue than one everyone will have.

The biggest issue I have with the bike is the cornering, but I suppose if you are looking at this in comparison with other big power cruisers, that isn't something you're too worried about.

Also, the button to turn the bike on is wedged under the digital speedometer and is difficult to see, let alone push to turn on the bike. You feel like you're on a hidden camera show the first few times you struggle to operate it.

While I enjoyed riding the Diavel Strada around for a little bit, I could not imagine owning one. Personally I think it tries to do a lot of things, while the only things it does well are attract attention and accelerate really fast. Then again, that's all a lot of people want and if that's you (and you happen to have an extra 20k lying around you can't figure out how to spend) more power to ya.

EDIT: The button I was using to turn the motorcycle on and off (like the key would normally do) was only supposed to be used if the battery on the key fob died or if you lost your key. This is why it was not made as readily accessible as I would have liked.