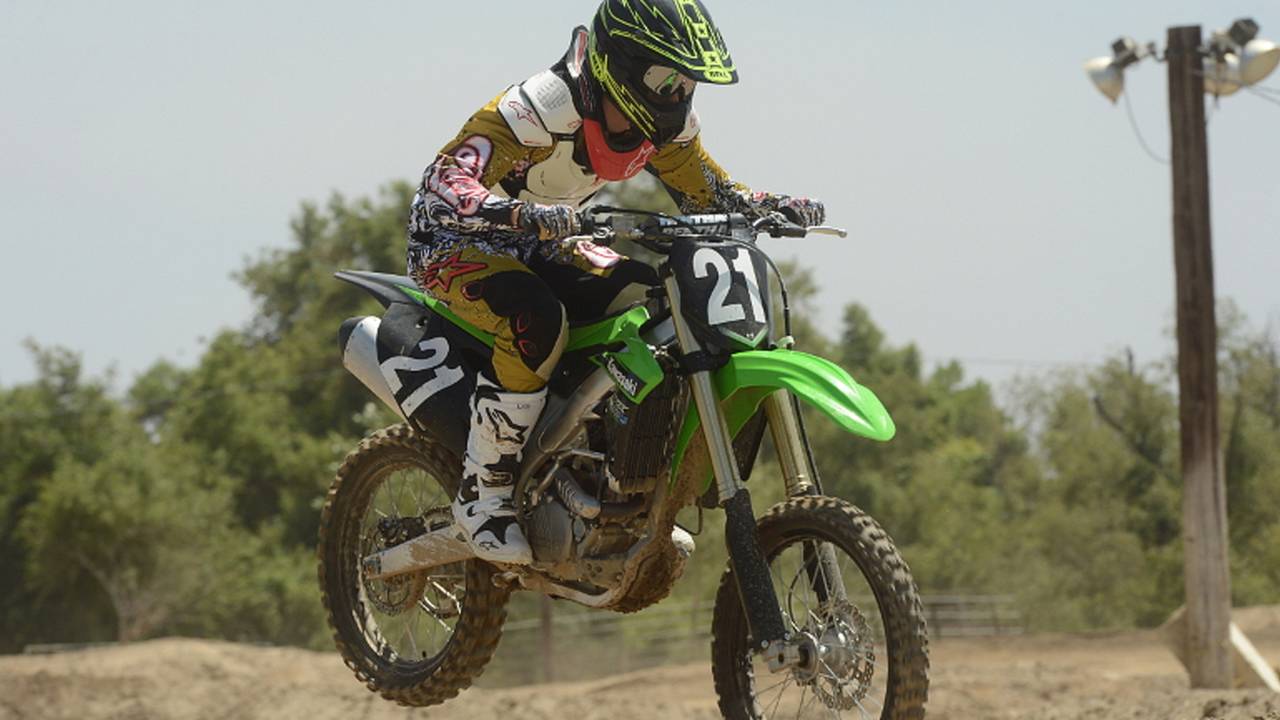 Alpinestars have set the bar for years when it comes to off-road protective gear, especially with their Tech 10 boot. They are currently updating their entire off-road lineup, and we got a chance to check out their new boots, knee braces, and neck braces (new upper body armor due by the end of the month). Can they stay on top?

The 2014 Tech 10 boot has received a ton of upgrades and is radically different from the previous version. From the new, more anatomical shape, to the front and rear sliding blades, to the all-new closure system, this thing is tricked out to provide you the most functional, supportive, and protective boot available.

I got a chance to wear these the other day at Milestone MX Park in Riverside and I have to tell you, these things are amazing. I've had a few pair of adventure boots, but these were my first dedicated motocross boot and, at first glance, I thought they seemed heavy and restrictive when I first picked them up. 15 minutes later I was on the track and could not believe the support and comfort I had racing, sliding, and jumping around the track. With your foot inside, it's amazing how much control and movement you have while staying completely safe.

I'm no expert off road, so the real testament to these boots came from the pros that Alpinestars had join us in testing the boots. They raved about the support and freedom provided by the boots, all while doing back flips or airing out over the whoops on the track. These are top of the line, heavy duty, race quality pieces of equipment. They don't do anything special to them for the top riders in the sport (except give them to them for free). If you want the best, these are it.

If the Tech 10 is the boot for those who just have to have the best, the Tech 7 is for the rest of us. They're the little brother to the Tech 10 is almost every way, a tad smaller, a little bit lighter, don't use an inner booty, and have a few less features. If I were choosing a new pair to buy, keeping in mind that I'll never do a 50 foot jump or put down an impressive lap time on an MX course, these would be the ones hands down.

When the Alpinestars rep handed me the knee brace to take a look at, my first thought was that it was for old guys with knee problems. Not wanting to insult them with all of my vast off road knowledge and experience, I kept my mouth shut as he went over its details and showed me how to fit it correctly. It was too much work to take off later and I figured I owed you all some sort of a test so I left it on as I fired up the Kawasaki 250F and made my way onto the track. 100 feet and 2 turns later, it all made sense and I felt unstoppable. The new Fluid knee braces protects from lateral damage as well as hyper extension and provides an incredible amount of stability while riding, while actually allowing for a great degree of movement. They have improved a ton over their previous knee braces, this one requiring a one-time setup than then allows you to use the exterior snaps and velcro to enter/exit, and including different inserts that are super easy to swap that allow for different amounts of extension based on how much support you want. Oh, and they're all day comfortable. I'll never ride moto again without these.

Ok, so I lied. I would ride without the Fluid Carbon Knee Brace, but only if I were wearing these. The non carbon version of the Fluid Knee Brace, these are the Tech 7s of the knee brace world. Same incredible fit, same inserts customizing the forward flex, same incredible protection. If you aren't a pro rider or don't have the money to drop $700 on knee braces, I highly recommend these.

This was also my first time wearing any kind of neck support system, and I may have been a little spoiled. Wes had the previous BNS and he absolutely swore by it, and Alpinestars have taken it to the next level with this new one. It's incredibly light, so much so that you don't even really feel the weight while riding. The'ye increased the fit customization so you exchange pads to really tailor in the fit (something I experienced to it's fullest when we found out I was a perfect split between small and extra small). The redesigned front closure is nothing short of pure genius (the previous version used a buckle while the new one just has a pull tab that magnetically snaps back into the closed position).

Following the same system as the rest of the line, the non carbon version of the BNS system is spectacular and just barely falls short of it's big brother. In this case, they're basically the exact same product, this one just without carbon and therefor gaining a little weight. The idea here is to protect your beck against being rammed down between your shoulders or from flexing to far to the front, rear or sides. What looks like a big, awkward device is actually light, comfortable and unobtrusive, but does require a compatible armor rig in order to fit properly.

As I mentioned, Alpinestars dirt/MX gear is the absolute best of the best. The versions you can buy in stores or online are the same the guys are wearing at the X Games (and there's a reason why they're ALL wearing it). These new versions of the boots, neck braces, and knee braces are all absolutely incredible and I didn't have/hear a single complaint about any of it. If you're in the market or even if you just ride off-road, I highly suggest looking into adding this to your collection. This has taken safety gear to an entirely new level.

We'll obviously be doing a ton more testing in the near future so check back for updates on the gear during our adventures.