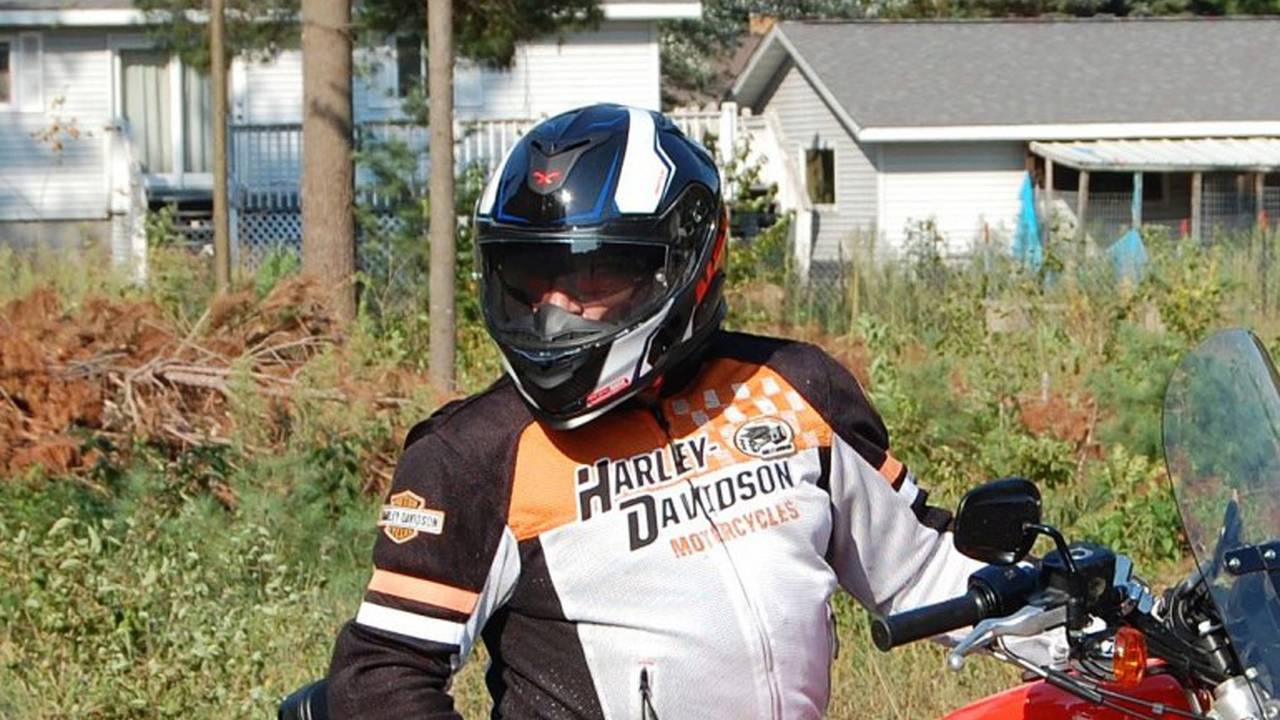 My first ride with the Nexx X.t1 Raptor full face helmet was taken when it was 94 degrees in the shade and humid. It was a perfect day to put the Raptor’s ventilation system to the test.

That system consists of twin 3/4” by 5/16” chin bar vents that are closable with a single slide cover and twin crown vents approximately 1” x 3/16,” both of which close with a single toggle button.  Four fixed-open exhaust ports take the air out the back of the helmet; two at the crown, two near the base.

As is often the case, the chin bar vents brought in loads of fresh air when open and effectively closed off air flow into the eye port when closed. The crown vents were most notably effective when the helmet was tilted to a somewhat head-down angle.

The X.t1 Raptor’s graphics are sharp and the carbon fiber shell is faintly visible through the unpainted area of gel coat. With both visors down, your eyes have substantial protection.

This is by design; the Raptor is targeted particularly at the sport and sport touring rider, whose machines tend to be built for comfort in the moderate forward-leaning to aggressive performance riding positions.

The Raptor weighs in at a claimed 1460g (3.2 lb.) thanks to its full carbon fiber shell. The carbon fiber weave is faintly visible through the non-painted areas of the gel coat. The finish of the exterior of the shell is excellent, with sharp geometric graphic design and all exterior trim items such as vents and edge trim fit precisely creating a consistently smooth surface—none of those annoying wind-whistle noises emerge at high speed.

Other versions of the X.t1 utilize the X-Matrix composite shell, which combines multiaxial fiberglass, 3D organic fibers, special aramid fibers and carbon reinforcement. The shell is designed in a somewhat elongated tear-drop shape with a small spoiler molded in across the rear aspect. At interstate highway speed and above, there is minimal buffeting and close-fitting neck roll, and chin curtain cuts interior wind noise appreciably at highway speed.

The bottom view shows the relatively small entry opening that results from the substantial neck roll padding as well as the red emergency cheek pad removal straps and the chin curtain that fell out initially but once reinstalled with enthusiasm stayed in place ever after. The business end of the Micro-metric retention strap buckle is also visible.

One small problem was the chin curtain parting company with the helmet the first time I took it off. It's apparently designed to be held in place with some small holes molded into its top edge that slide up between the chin bar shell and the chin bar impact material, perhaps to be caught by hidden tabs. Either the tabs were missed or they don’t have the strength to hold the chin curtain in place—in any event, after I took the helmet off, the chin curtain ended up laying on the ground.

The fix is simple enough; just slip the tab back into place and apply some pressure to push the tab as far into the slot as it will go. Pulling on it after re-installation seemed to confirm it was properly seated this time and it didn’t fall out again in use, so perhaps it simply wasn’t seated properly to begin with. Putting some adhesive on the tab would be a next step if it comes loose again.

This view with both visors raised shows the panoramic eye port as well as the removable breath deflector.

Putting the Raptor on takes a bit more effort than a lot of other full-face helmets because of the tapered base of the helmet combined with the substantial neck roll padding on the removable cheek pieces, which makes the entry very snug. Once it’s on, the fit is also snug, and the helmet doesn't move or shift at all in use—it fits you like your own scalp. And, of course, in helmet fitting, that’s a good thing, as long as it’s comfortable to wear (and it is). The fit does relax a bit with more use.

The rear view of the helmet shows the ventilation exhaust ports, molded in rear spoiler, the sun visor lever on the upper left side of the crown and the DOT FMVSS 218 certification label.

However, a helmet that fits that snugly can be difficult for emergency responders to remove safely to prevent aggravating possible cervical spine injuries in the event of a crash. The Nexx designers included quick-release cheek pieces that allow responders to hook their finger into the red emergency removal strap in each side of the helmet and pull the cheek pads out, allowing for much easier and safer helmet removal. A small red sticker on the left side of the chin bar indicates the presence of the emergency removal straps.

The removable comfort lining is finished with Cool Max fabric, which is washable, hypoallergenic, anti-bacterial and has a plush, fleece-like feel to it.

The clear polycarbonate (Lexan) outer face shield is Pin Lock ready (Pin Lock visor is sold separately) and pivots on a hinge system that provides four distinct positions including the full-open and lock-down positions. The hinge is a quick-release design called the X-Swift Quick Release to allow quick visor changes without tools. The visor has, what I believe to be, the most positive lock-down system I’ve seen yet that Nexx calls “Block & Seal.”  A removable breath deflector is included.

When the visor is lowered to the lock-down position, a tab molded into the interior surface of the visor engages a locking mechanism in the chin bar, which effectively locks the shield down and holds it firmly against the neoprene eye port seal gasket. To release the visor, a button on the front of the chin bar immediately below the bottom edge of the visor must be pushed in. The visor then springs up about an eighth of an inch allowing the wide tab on the front of the visor to be used to raise the visor to the desired position. The system works easily with light gloves or no gloves, but it takes a little practice with thicker cold weather gloves on because the button and the visor tab are so close together; it can be difficult to distinguish between the two through thick leather.

Behind the clear external visor is an integral smoke tinted sun visor that retracts into the helmet shell with the use of a small lever on the left side of the helmet crown. It locks down and locks into the retracted position with a palpable click, so you shouldn’t have the sun visor dropping down or moving around when you aren’t moving it from one position to the other.

READ MORE: So You Want To be A Bike Builder | RideApart

The retention system is one of my favorite features on the helmet—it's the ratchet-style quick-release Micro-metric buckle system. There is very little extra strap to contend with, and there is no fumbling with the old nylon straps and metal double D-rings that usually require removing your gloves to get threaded and adjusted properly. Just slide the notched tab into the lock mechanism to the desired fit point and it’s on.

To release the retention strap, just pull on the red nylon tab and the lock releases. Each operation is easily done with gloves on. The only drawback to the system is that there is no ring to engage in a helmet lock if you use one on your bike. Given the Raptor’s MSRP of $499.95, carrying the helmet is probably a good idea if you don’t have a locking top box or big enough saddle bag you can stow it in while away from the bike.

The X.t1 comes with a cloth drawstring carry bag, the Ergo padding system for fine adjustment of the fit, and a comprehensive owner’s manual (but bring your magnifying glass to read the tiny print.) It's also prepped for installation of the Nexx X-com Bluetooth communication system, which is not included.