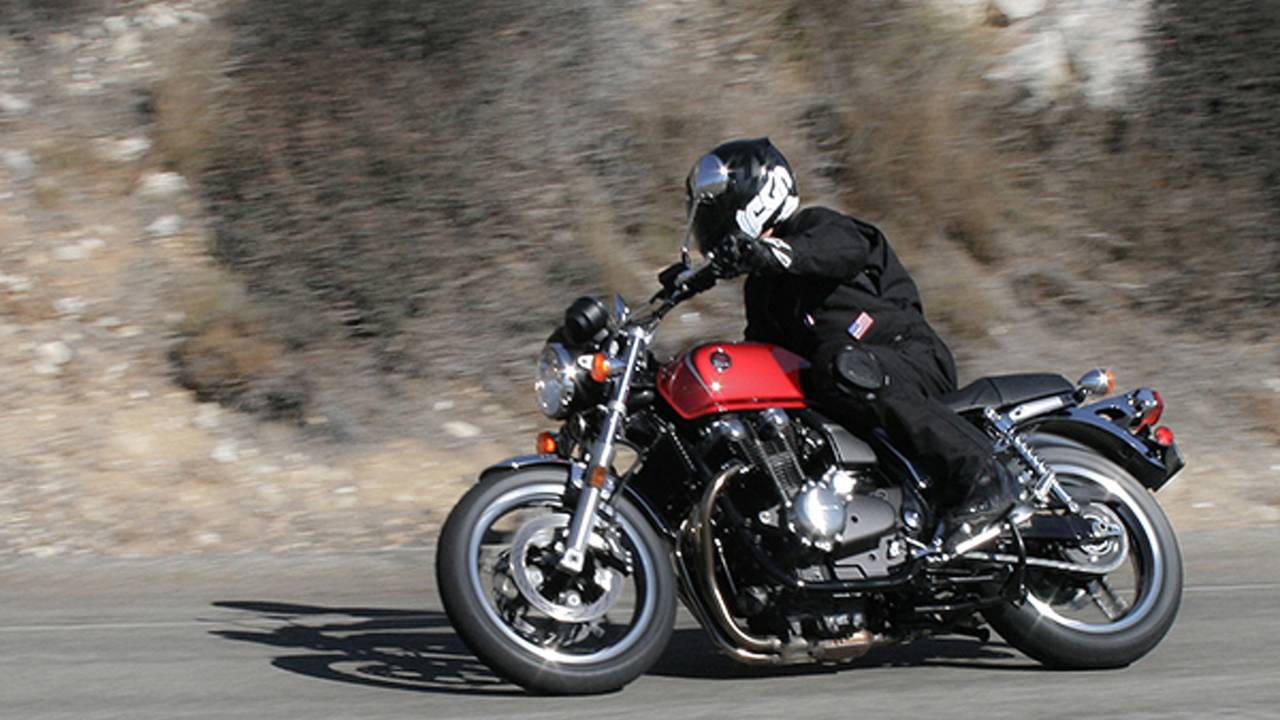 Today, Honda announced its CB1100F retro standard will be going on-sale in the US priced at $9,999. A week or so ago, we got to ride it. The big inline-four promises to recapture the character of classic Hondas in a modern package. 43 years ago, Honda was the maker of motorcycles for the masses. It was the age of the Cub, of You Meet The Nicest People and of motorcycles as transportation. Then, ...

Today, Honda announced its CB1100F retro standard will be going on-sale in the US priced at $9,999. A week or so ago, we got to ride it. The big inline-four promises to recapture the character of classic Hondas in a modern package.

43 years ago, Honda was the maker of motorcycles for the masses. It was the age of the Cub, of You Meet The Nicest People and of motorcycles as transportation. Then, in 1969, Honda introduced the CB750, beginning a line of Japanese superbikes that literally killed the European motorcycle industry and set in motion the chain of events that led to the ever more powerful, ever more expensive, ever more specialized motorcycles we have today.

Last year, Honda released the CBR250R. A bike for the (learning) masses. It was a big deal because it wasn’t fast and it wasn’t intimidating and it wasn’t expensive. It was just good fun, for anyone. That was followed up by the NC700X, CRF250L and now the 500 range. Suddenly, Honda’s making motorcycles for everyone again. And now we have a new CB too.

But don’t worry, this isn’t the start of yet another horsepower war. Instead, the CB1100F will be imported in limited numbers and is really about highlighting Honda’s history, brand and defining a character for its motorcycles.

That’s a good thing, because the big CB isn’t going to win many horsepower wars. At 87bhp, 68lb/ft and 540lbs (wet) it’s barely faster than that original 750. Nor is it a muscle bike in the vein of recent retros like Honda’s own CB1300, the Suzuki GSX1400 or Yamaha XJR1300. Instead, it’s just a nice, easy bike for getting around on. Something that’s about experience over performance.

Styling is sort of a pick and mix from the full CB lineage. The curvy downpipes are clearly a reference to the CB400/4 while the muscular tank was inspired by the CB750X. It’s a clean design that foregoes the en vogue focus on engine or edginess, instead delivering a cohesive package that simply says “motorcycle.” It does include contemporary influence in the emphasis on a forward slant to its lines, just here captured by the parallel lines of created by the shocks and frame tubes. Other up-to-date touches can be seen in components like the alloy wheels, which forego brake disc carriers in favor of mounting the discs directly to the spokes and the on-piece rearsets/pillion peg mounts.

Thumb the electric starter to fire up the 1,140cc air/oil cooled motor and you’re rewarded with an immediate and regular idle. No unbalanced stuttering and fuel-injection eliminates the need for a choke or a warm up period of elevated revs before you get going. That engine note at idle is quiet and subdued, but purposeful. Hinting at the rest of the bike’s character.

Typical Honda, the CB1100F couldn’t be easier to adapt to. It just feels right from the very first time you slip the clutch to pull away. It’s not immediately, overwhelmingly torque like you might expect of a relatively large motor. Instead that torque is just there to accomplish what you require of it. It’ll accelerate as hard as you need it to, but will never catch you out with its speed.

One refreshing retro touch are the relatively narrow, 18-inch wheels and radial tires. Free of any need to appear race-focused or to reign in enormous power, the 110 front and 140 rear instead make low speed handling something of a revelation. Know how 10mph, 90-degree city corners are a bit of a hassle on a modern superbike? You won’t realize how natural they can be until you hop back on something with narrow rubber.

On faster roads, the engine’s broad torque curve and the relatively large space between the five gears makes for easy, relaxed progress. Enough torque to pass cars starts at just 1,200 or so RPM and continues in a linear, smooth, fuss-free manner up to an easy 8,000. Handling remains reassuringly planted in faster sweepers and the brakes (ABS is an option) shed speed in a convincingly modern fashion.

One area where the CB excels is in comfort. My butt is still extremely tender post-wreck, so this is literally a sensitive area for me right now. The 30-inch seat height is tall enough to leave plenty of leg room without making the bike intimidating. You still sit on rather than in the bike, again a contemporary touch that’s the reverse of other retros like the Guzzi V7 and Triumph Bonneville. The seat is also domed, fitting naturally between your legs. Riding position is an archetypal sit-up-and-beg, with your arms extended easily at a natural height. The ride is positively cushy through the 41mm, preload-adjustable forks and preload-adjustable twin shocks. Even in my current state, I could ride this thing for hours.

Ridden enthusiastically on curvy roads, the high-quality suspension delivers great feel and the flexible motor makes for easy, fast progress. Ground clearance is fairly limited, the trade-off for the comfortably low pegs. It’s no superbike, but you’ll enjoy the hell out of riding it around some corners.

Pull over when you’re done, turn it off and listen to the engine ping and plink as it cools down. It’s hard not turn back for a second look when you walk away.

Unlike that original CB750, this new CB1100F isn’t something that’s going to change the world. It’s not going to redefine the motorcycle or inspire a new generation of rider. But, it would make a solid bike for getting around virtually anywhere. It’s slim and easy enough to bust traffic in the city, torquey and comfortable enough to eat highways and fun enough to make it worth riding a ways to find some good roads too.

TL;DR: A little heavy and a little pricey for the kids, the CB1100F will be a nice throwback for anyone left a little cold by modern Japanese bikes. It’s fun, not fast. A cool bike for getting around on.