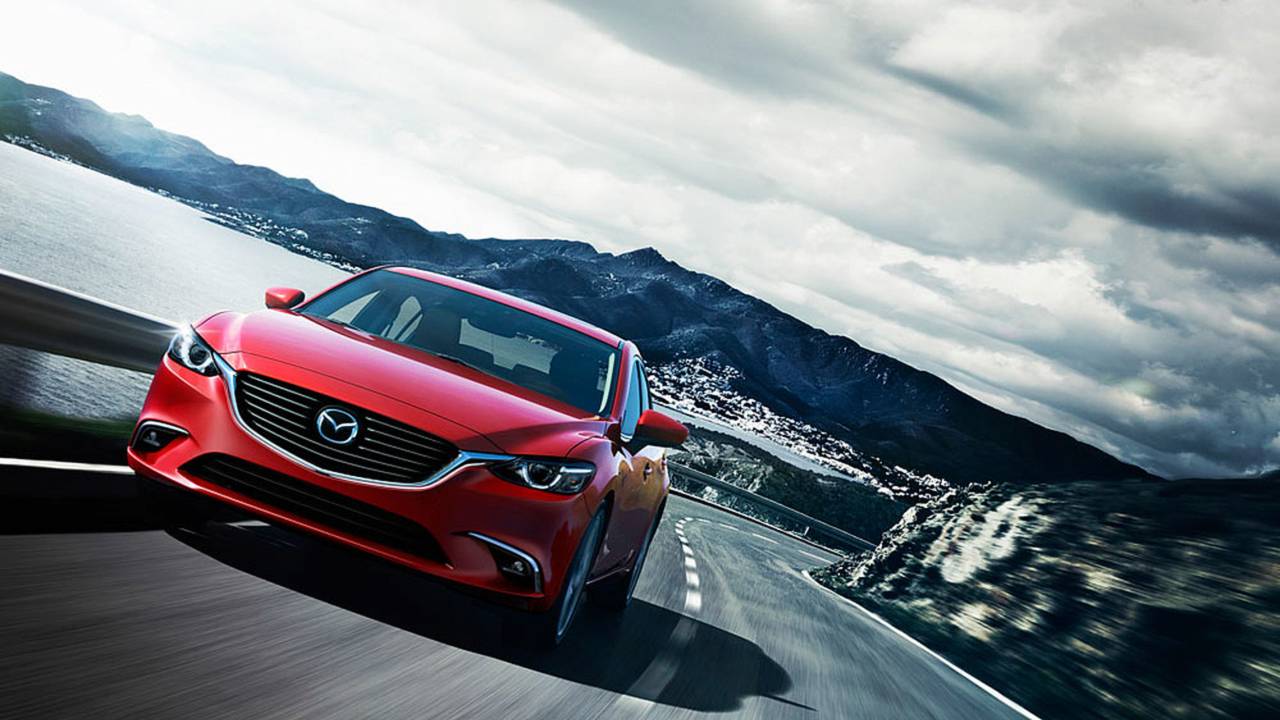 The 2016 Mazda6: in which the frugal "car guy" can have a premium experience.

Car enthusiasts are a fickle bunch. Attached to every new car review is a comments section bemoaning the “glut” of features found on modern cars. Things like automatic transmissions, advanced safety systems and in-car entertainment are all the spawn of Satan, they say.

In their minds, these technologies do nothing more than drive up the cost and detract from the overall motoring experience. Give them a car that’s cheap and fun-to-drive – with roll-up windows, please – and they’ll be the first in line to buy one.

Or so they claim. Well, they’ll buy it used. Someday. Eventually, when the price goes down a bit. But they’ll buy one. They promise. Because no one lies on the Internet.

Well, if any of those commenters are ready to put their money where there mouth is, they should head over to their local Mazda dealer and check out the Mazda6 Touring.

With a humble starting price of just $23,945, this mid-size sedan comes loaded with a leatherette (read: “vinyl”) interior, four-cylinder engine, six-speed transmission, and three pedals in the driver-side footwell. Oh, it also comes with a button labeled “NAV” that, when you push it, displays a message that the car you’re driving isn’t equipped with navigation. It’s the back-to-basics ride these enthusiasts want.

But that doesn’t tell the whole story.

Those leatherette surfaces may have been designed to withstand the hard knocks of the rental car life, but the material itself is surprisingly soft and inviting. It doesn’t have that hard, plastic-y feel we all grew up with in the ‘80s – it’s actually nice to touch. The interior design itself is simple and still uses old-school buttons, dials and knobs to operate the many standard features. Being the 21st century, there’s a full-color display, of course, but you don’t need to tap a screen 20 times to bump up the dual-zone climate control by one degree. It’s not the button-less look that’s currently in vogue, but as high-grade materials are used throughout, this cabin should look good (and remain functional) for years to come. Pony up some extra cash, and you can get the two-tone leather interior seen in this press shot. Our tester, on the other hand, came in a Spinal Tap-approved black-on-black-on-black interior.

As for that four-cylinder powerplant – it’s a 2.5-liter DOHC Skyactiv-G unit that’s good for 184 horsepower and 37 mpg on the highway. It also comes mated to a slick-shifting 6-speed manual transmission, giving more control – and more fun when behind the wheel. The clutch isn’t too heavy, but it’s still slightly annoying to have to modulate when stuck in Los Angeles’ infamous stop-and-go traffic. But that’s more due to this writer being lazy than a knock against the clutch itself. When the road opens up, though, it’s incredibly satisfying to row through the gears and feel more at one with the car. For those who don’t want the third pedal, a 6-speed auto is also available.

Being a Mazda, this Mazda6 Touring has all the “zoom zoom” you’ve come to expect from the brand. A great highway cruiser, this mid-sized sedan gets better when the roads get twisty. It’s no Miata, but it’s very responsive, and with its sure-footed grip, you just want to push it harder through each successive corner. Simply drop a gear, give it some gas and grin as your commute becomes the best part of your day.

Most surprising of all, though, is just how good this car looks in person. Its Soul Red hue –- the hero color and a $300 option –- has a richness and depth that’s best experienced in person. It adds the right amount of sportiness and sophistication, making this affordable ride feel like a premium machine.

The front end is properly aggressive with its angry lights and massive grille, and its standard 19-inch alloy wheels hint at the Mazda performance DNA insde. Softening things a bit is the sculpted body, whose flowing curves add grace and strength to this already-handsome sedan. It’s odd… we spend our days driving awe-inspiring vehicles. Things like Bentleys, McLarens and SEMA-built Jeeps. But for some reason we had more random “car guy” conversations with this Mazda than anything else.

So it looks good, drives well and can be had with a stick. It’s the perfect car for the “car enthusiast” who says that Miata is the answer for everything, but can’t actually buy one. And with standard tech like Bluetooth connectivity, a blind spot monitoring system, rear cross-traffic alert and a push-button start, it even has the stuff to make the modern, everyday car buyer happy. And all for under 25 grand.