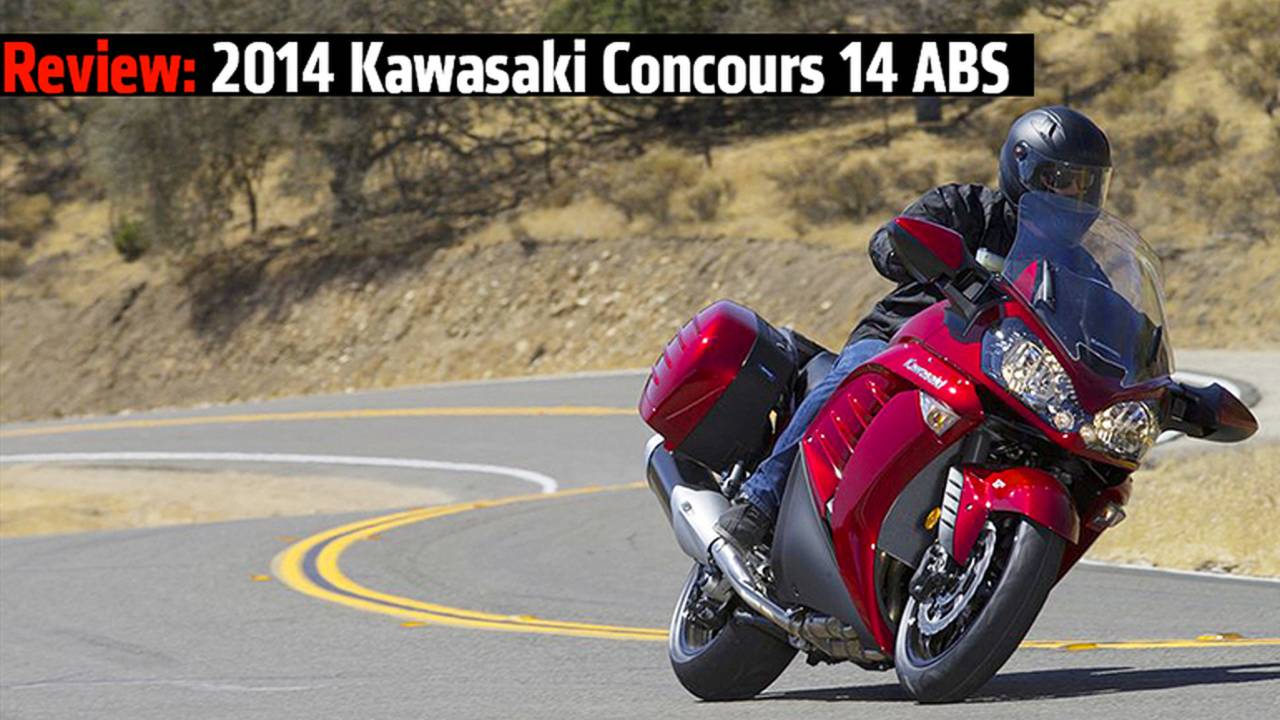 The Kawasaki Concours is a legend in sport touring. Other models come and go, but the Concours soldiers on. The first generation ZG1000 Connie (as the bike is known to the faithful) rolled out of the factory from 1986 to 2006 with only incremental changes along the way. Prized for its durability, simplicity and long distance chops, the water-cooled, shaft-driven workhorse came with a full fairing, hard saddlebags and a built-in tail rack. The formula worked, and the long production run spawned robust aftermarket support.

In 2007 (as a 2008 model year bike), Kawasaki replaced the ZG1000 with the Concours 14, a then all-new sport touring motorcycle. Based on the Ninja ZX-14 platform, the new Connie’s inline four-cylinder engine now displaced 1,352 cc. It was still liquid-cooled, shaft-driven, fully-faired and wore hard luggage and a built-in tail rack, but now featured fuel injection and optional ABS.

In 2010, Kawasaki added traction control (KTRC) and linked brakes, along with some body modifications that addressed a heat issue noticed by some riders. In the great tradition of the ZG1000, the new Connie seems destined for a long run with only incremental changes.

The frame is an aluminum monocoque, a design that's narrow, rigid and lightweight. The fuel tank holds 5.8 gallons of premium unleaded gas, good for over 200 miles per tank at an estimated 37 mpg. Curb weight is quoted at 688 lbs wet.

I’ve always been a Connie fan, though I haven’t owned one—yet. The 32.1-inch seat height was perfect for me at 6’2” tall with a 32” inseam. The minute I climbed onboard the 2014, the riding position felt just right. My legs were comfortably bent with my feet on the mid-mount footpegs, and the reach to the bar promoted a slight lean forward, but not enough to put any weight on my wrists.

I positioned the electrically-adjustable windshield at the lowest position so that I was looking over, not through, the screen. The clutch was light and easy to modulate, and the throttle response was linear and smooth. The engine sound was nicely muted with the stock exhaust, attracting little attention.

The engine was tuned a little softer than it is in the ZX-14, but still generated impressive thrust. Kawasaki reports that peak torque of 102 lb-ft arrives at 6,200 rpm. Many dyno tests have measured the Connie at 140+ hp (Kawasaki doesn’t quote horsepower figures). Power is delivered in a very predictable, manageable way. Variable valve timing and ram air induction technology combine to increase thrust at speed.

Handling on a 688-lb bike is critical and I was concerned that the Connie’s shaft drive might introduce handling anomalies. My concerns were unfounded—the bike’s Tetra-Lever Shaft Drive displayed no driveline lash or jacking and I came to trust that adding throttle wouldn’t make the bike squat in any way that I could detect.

I didn’t mess with the preload adjustment on the rear suspension, nor did I need to adjust the rebound damping or spring preload on the front end’s 43 mm inverted telescopic forks—the factory “middle” settings suited me just fine. You’ll have to break out the tool kit to make changes, but it’s a pretty simple operation.

Side-to-side transitions on the Connie are comfortable and there’s plenty of lean angle available for sport riding. I sought out my favorite roads and took the long way home every single time, stretching the Connie’s legs and enjoying the ride. I’d love to take a long back road tour on a Concours someday soon. With its combination of comfort, speed and carrying capacity, it would be a great companion.

There’s just gobs of power available at the twist of a throttle, yet low speed operation and sedate cruising can be achieved with little anxiety. When it comes time to pass or accelerate rapidly, the engine spools up quickly, propelling the bike forward in a hurry and without any lag or unexpected pulse.

I found that the Connie was comfortable to ride in traffic, with a wide power band that allowed me to minimize shifting, but still had enough in reserve to squirt through gaps in traffic. I was able to maneuver through LA’s crowded freeway system, lane sharing when necessary thanks to the relatively narrow body (its appearance is deceiving). If my handlebars fit through a gap, I was confident that the bags would follow, and the seating position was upright enough that my view ahead gave me time to react to changing conditions.

I’m not a big fan of linked braking systems, but I didn’t have any issues with the Kawasaki Advanced Coactive-braking Technology (K-ACT) ABS, which links front and rear brakes. I chose the Standard Mode, which minimized the linked effect, giving less front braking when I used the rear brake deep into curves.

The High Combined Mode is designed to give more front brake activation when the rear brake is used, and is said to be “ideal for touring and two-up use.” I’ll take less of that, please. Knowing that my front brake was going to be active when I depressed the rear pedal made me glad to have traction control active at all times, too. I never noticed the traction control system intervening in my riding, except for a few flashes of the instrument panel indicator during a run through the canyons. The brakes impressed me with excellent feel, great stopping power and predictable operation overall.

Linked braking can’t be completely deactivated, but with the different modes, you can tame it down. For passengers, the rear-seating position is high and the foot pegs could be lowered a little for more comfort. It was a climb for our passenger.

The bike is one of the best looking touring models on the market, but the limit to only two colors is a drawback. It could also use some more bells and whistles and is getting a little long in the tooth for 2014.

A new 2014 Kawasaki Concours 14 ABS lists at $16,199. There’s plenty of competition out there in the sport touring racket. Concours’ closest competitor is the Yamaha FJR1300ES, which is available with an electrically adjustable suspension this year for $16,890.

The real competition for a new Connie, though, is a used Connie. A 2010 Kawasaki Concours 14 ABS is worth about $9,355 in excellent condition at a dealer, according to Kelley Blue Book. A well-cared for, low-mileage Connie from a private party might be even less and may already be equipped with extras that you’ll find useful.

I pretty much fell in love with the 2014 Concours. It made a great everyday, around town bike and was a fun weekend runabout. It made me dream of a long tour on two wheels, and best of all, it seems within reach financially (especially if I can find a good used one). If you don’t need the flashiest, newest bike on the market, but you prize dependability, excellent performance and reliability, you’d do well to consider a Connie for your sport touring needs.