We ride the 2015 BRP Spyder F3, reviewing the specs and riding impressions.

I'm at home on the race track or canyon road. You'd normally find me throwing my leg over the RideApart Suzuki GSXR-600 project bike, not a bagger or three-wheeled monster. So, when the opportunity to ride the new Spyder F3 came up I wasn't the first editor considered, but when I learned it meant a long weekend of riding in the Canadian countryside, I thought maybe I could bear the extra wheel to make the journey. For this sport bike rider, the trip turned into an eye-opening experience.

From my skeptical, sportbike point of view, the Spyder F3 was a complete surprise. There's tons of fun to be had on the unique three-wheeled format. 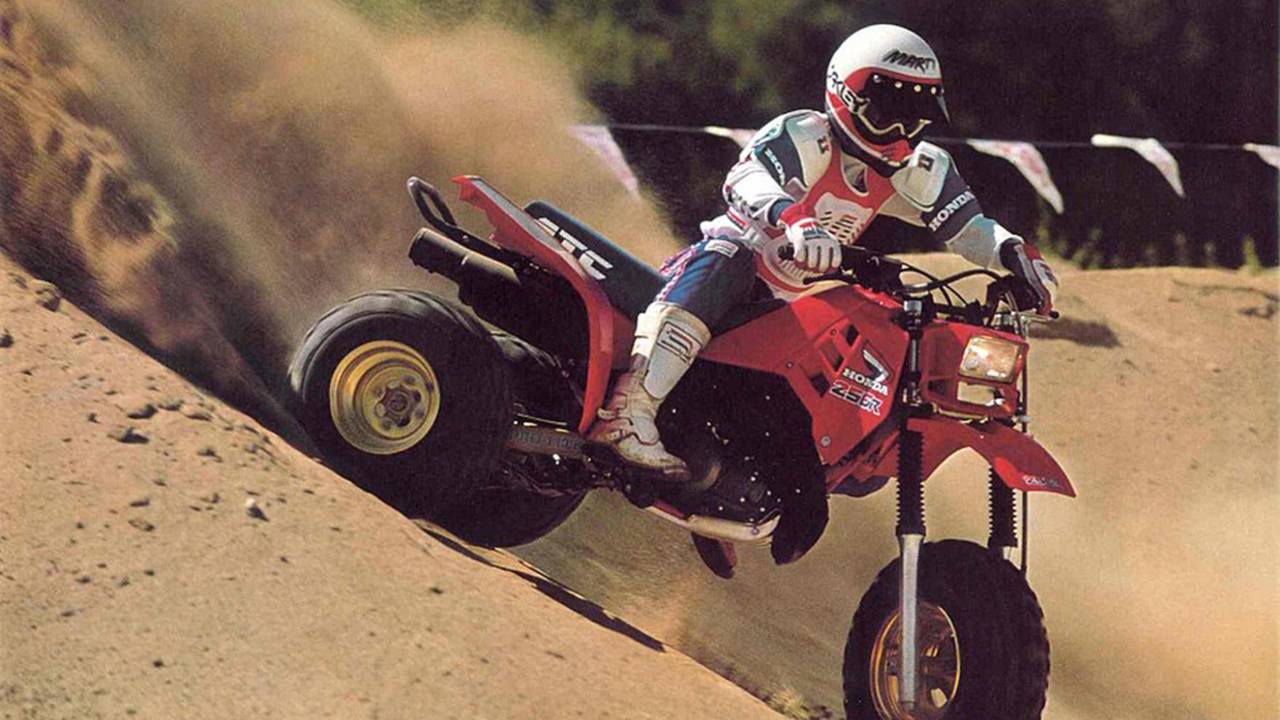 The only three-wheeler I'd ridden before the Spyder.

I've never been aboard a three wheeler, aside from the notorious Honda ATC250R back in the day. Contrary to the dangerous ATC format, the Spyder’s unique layout places the power delivery wheel in the rear with the two wheels up front taking care of steering  and stability duties. This creates a riding experience very similar to a snowmobile, a market in which BRP has a long history of dominating with the pioneering Ski-Doo brand. Powered by a stout Rotax powerplant, channeled through a 6-speed transmission and regulated with plenty of electronic rider aides, the Spyder F3 is a motorcycle like no other.

The Spyder F3 was developed to address the shortcomings of the existing Spyder models (RS, ST and RT) while retaining the aspects that has attracted riders to the unique product.

The top three reasons consumers are drawn to the Spyder line are safety and stability of handling, ease of operation, and style. Others are turned off by the products mainly because they prefer a more relaxed riding style, are looking for a more comfortable ride and dislike the handling attributes. The engineering team behind the Spyder F3 developed an open-air riding experience that placed the rider further back and lower on the motorcycle in a position similar to a cruiser while redesigning the weight distribution and steering characteristics. The result is a package 160lbs lighter than the RT model and customizable ergonomics with the “UFit” system offering 5 different peg positions and 4 handle bar options. 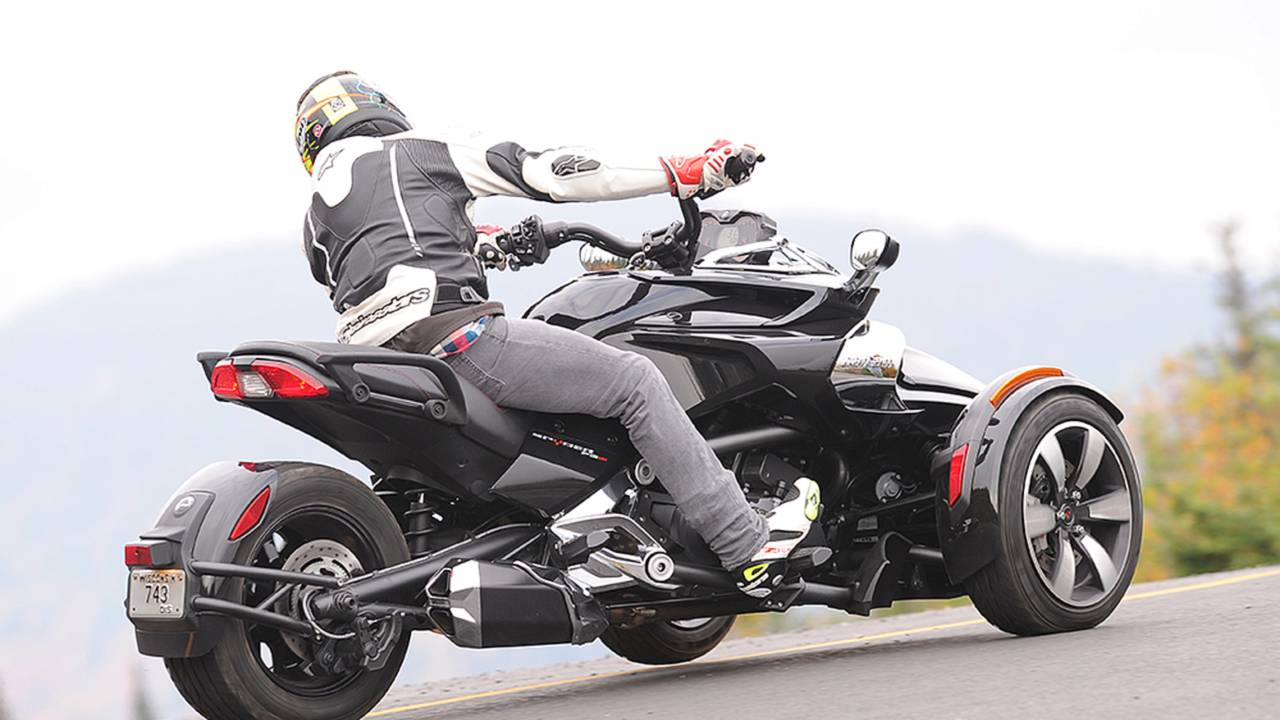 Powering the new Spyder F3 is a purpose-built Rotax 1,330cc ACE straight 3-cylinder engine putting 115 HP to the ground. Output is directed through a 6-speed standard manual or semi-automatic SE transmission. Gearing has been shortened with the addition of a 6th gear and larger rear sprocket for harder acceleration capable of a 4.8 second 0 – 60 MPH time.

Power is delivered rather linearly with the meat of the powerband coming on around 4,000 RPM then tapering off just after 8,000 RPM. This relatively low-revving operating range enables over 250 miles to a full tank of gas and nearly 10,000 miles between oil changes.

Sitting in the pilot’s seat of the Spyder F3 for the first time required a bit of an orientation period. On the semi-automatic transmission (SE) model, the handle bars are free of any levers with up, down and reverse shift action buttons on the left thumb control and a fly-by-wire twist throttle control on the right.

Again, on the SE model, the footpegs are also clear of many controls aside from the large brake pedal on the right that actuates both the front and rear binders (60/40% front/rear braking power distribution) monitored by the electronic ABS system.

The manual transmission option has your standard foot shifter on the left peg and hydraulic clutch lever on the left bar. As a sportbike rider accustomed to traditional motorcycle formats that also prefers manual transmissions in cars, I assumed the manual transmission on the Spyder would be my absolute choice. However, after wrestling with clutch modulation and heavy gear selection, the semi-auto allowed concentration to be focused on the riding as opposed to mechanism operation (especially if said riding includes a sliding rear end…).

This transmission is designated with the “semi” label because it will downshift without any rider input but requires a flick of the upshift button to find the next positive gear. A fully automatic transmission with early shifting also actuated by the thumb selector as well as quicker shifts would be great to see in the first round of revisions. 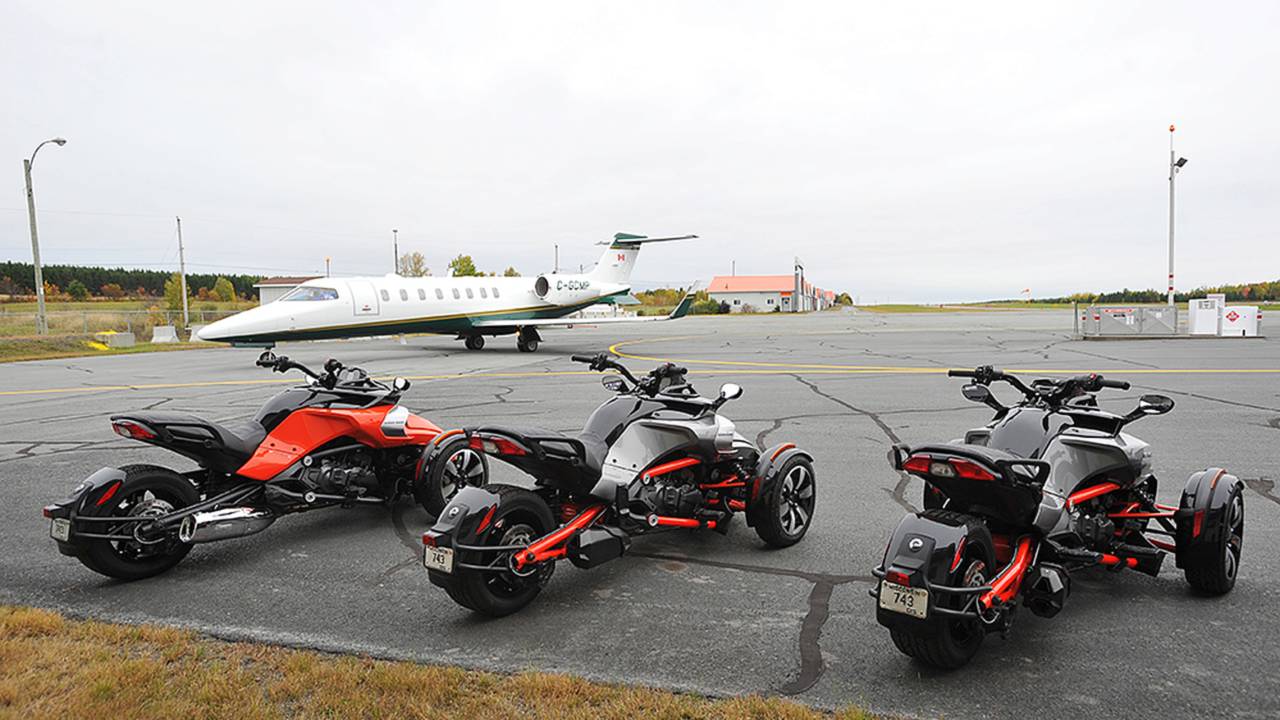 The strong mid-range power produced by the engine stabilized by the two front wheels makes gentle acceleration a difficult task. The traction and stability control systems (developed overseas by Bosch) do not simply cut power to the engine when the rear wheel begins to speed up quicker than the fronts. Instead, smoky burnouts are permissible as long as the steering angle is within 13 degrees. The moment the rear end steps out beyond 13 degrees, ignition is cut in order to regain traction which makes for endless fun chasing drifts out right along this threshold with the assistance of the dynamic power steering. 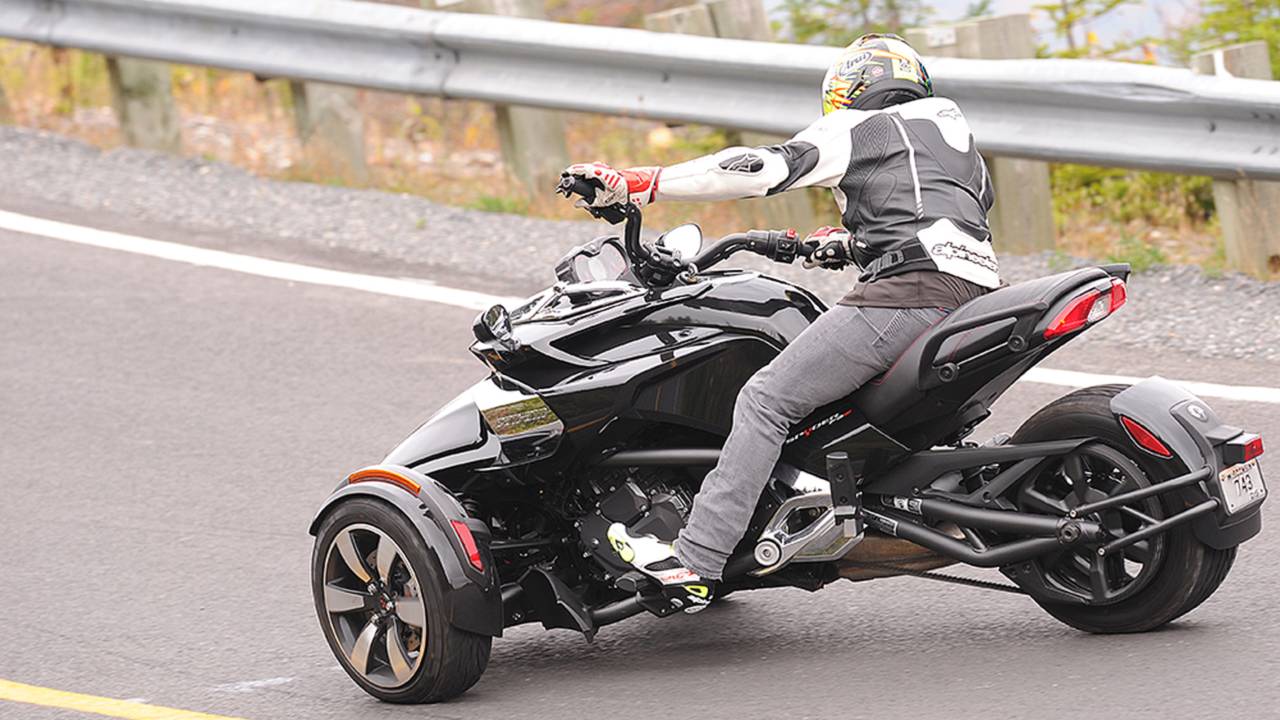 Additionally, wheel speeds of each front wheel are measured independently as opposed to suspension travel in order to keep all three wheels planted (for the most part) by also cutting power to the ignition. Finally, when speed must be shed in a hurry, the Brembo components paired with the ABS system as well as the additional wheel on the ground for added friction take care of this with force.

However, riding the Spyder F3 to the limits can result in harsh rider aide intervention, such as squirrelly high-speed hard braking or the outside front end diving drastically in the corners when power is abruptly cut. 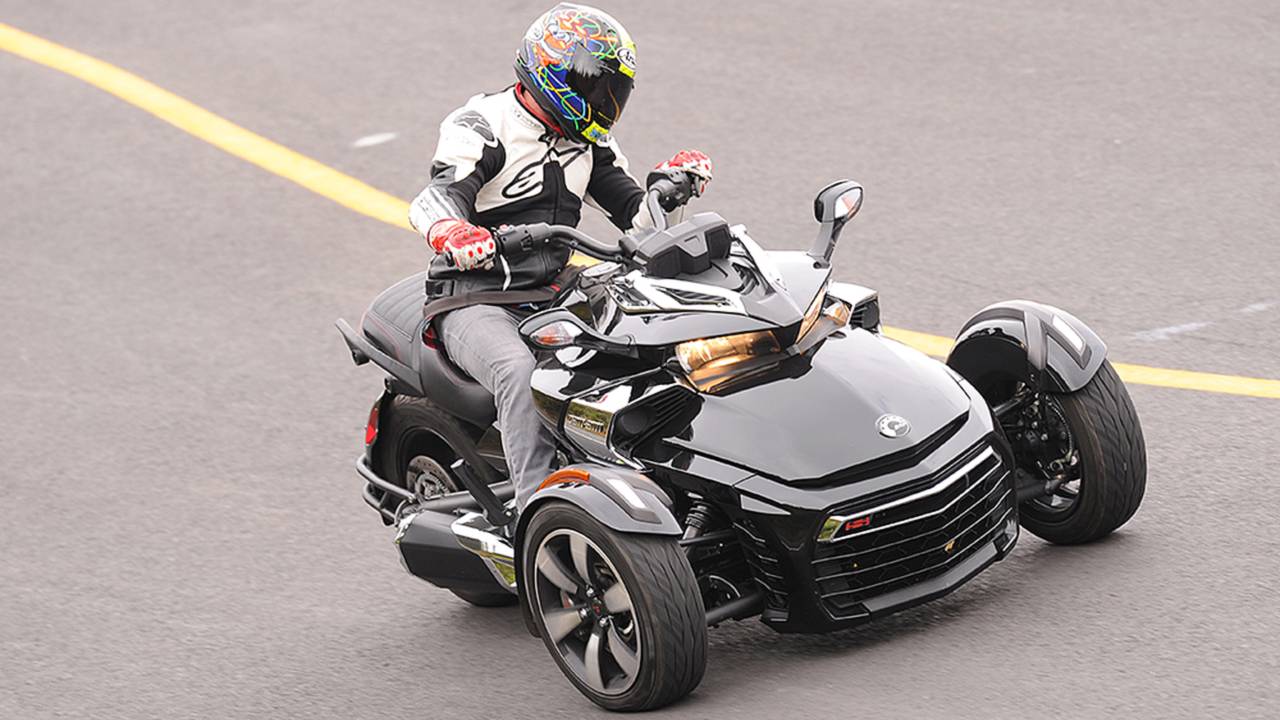 BRP’s all new Spyder F3 for 2015 furthers its dominance of the niche offering three-wheel enthusiasts another riding style option. Moving the foot pegs forward and bringing the handle bars back put the rider in a more relaxed and infused position. This cruiser riding style also reduces cornering g-forces exerted on the rider’s arms and legs to just the inside leg, furthering the comfort and handling characteristics. Add the ability to customize the F3 with over 60 accessory options such as back rests, fog lights, wheels, Fox Factory shocks and Akrapovic shorty silencer, and you have quite the three-wheeled package starting at just under $20,000.

Is the Spyder F3 replacing any of your steeds in your two-wheeled arsenal? Definitely not. However, does the F3 offer a whole new riding experience with a fun factor that is impossible to ignore? This can only be determined from some hot time in the pilot’s seat and we found this notion to be confirmed. 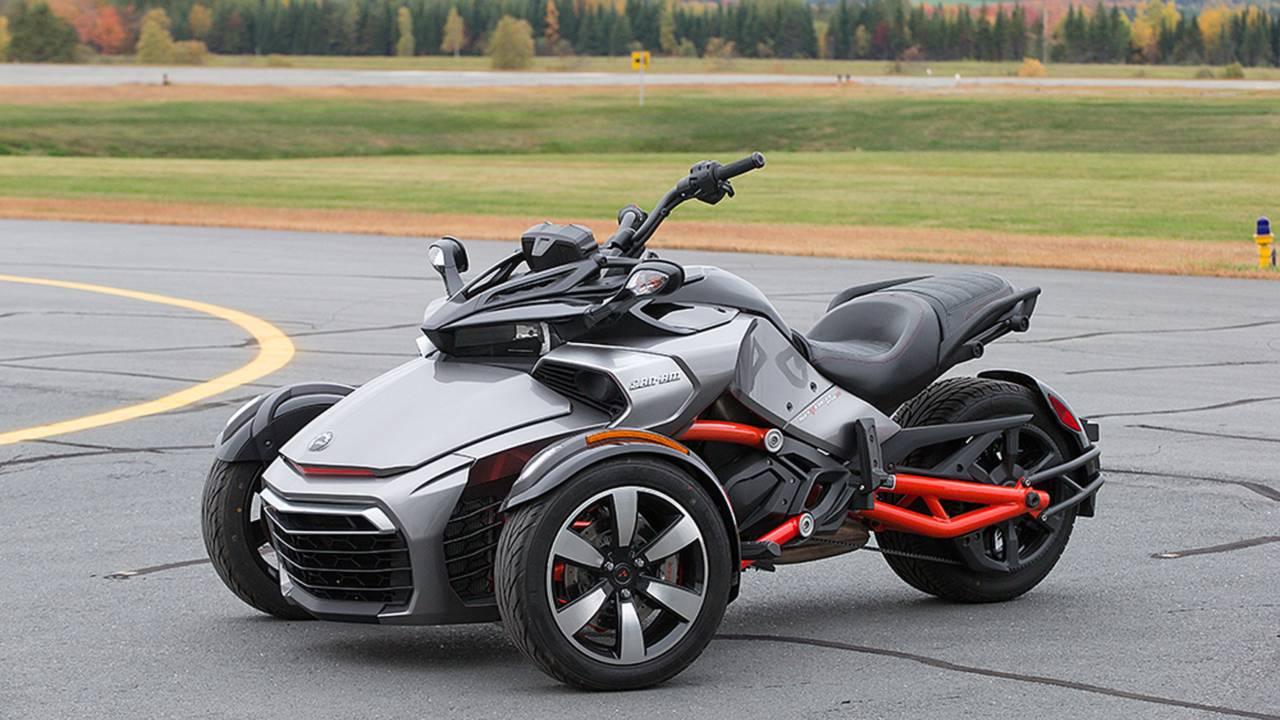 By: Bruce Speedman
++
Got a tip for us? Email: tips@rideapart.com