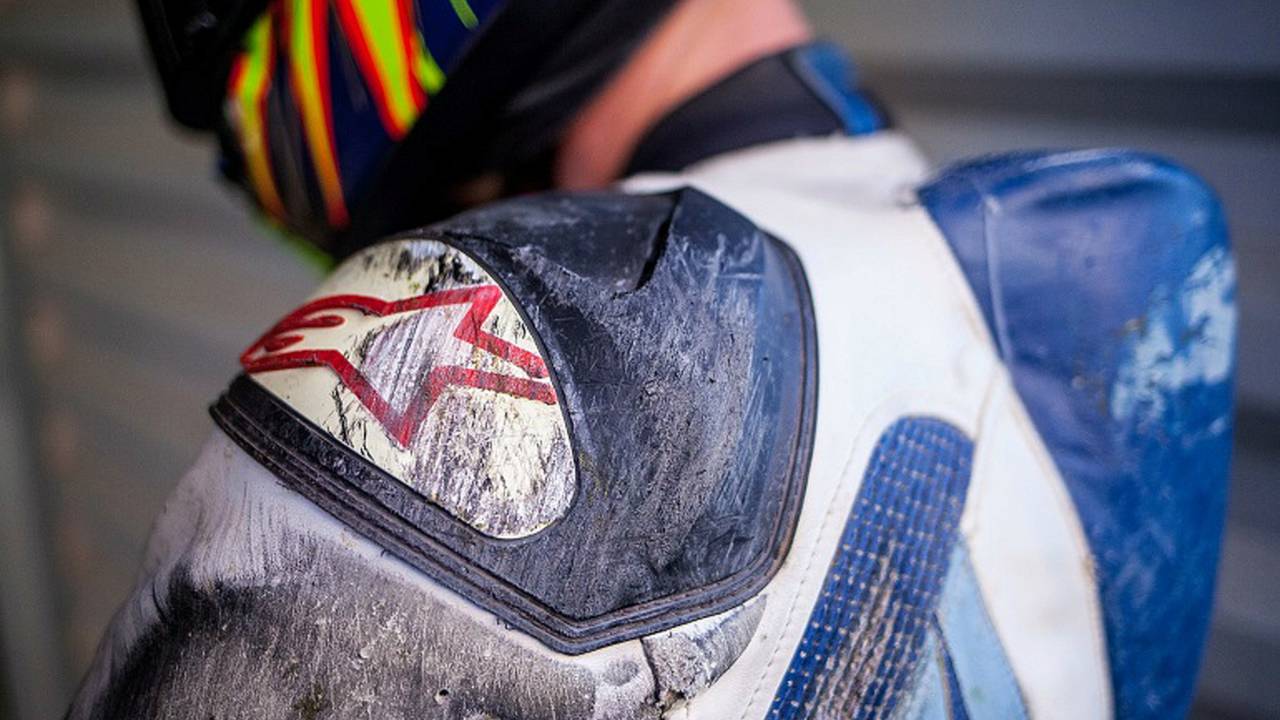 We put the Alpinestars Race Replica Leather Suit through an (unintentional) crash test. The results...

Alpinestars’ premium set of race leathers stands the test of time (and pavement, then dirt).

As one of the most experienced and prestigious leaders in motorcycle safety gear, Alpinestars has been perfecting the art of racing leathers for decades. Everything from unconventional materials, experimental armor and innovative manufacturing processes to technological breakthroughs such as the “Tech-Air” airbag system has been incorporated into the company's race suit protection within the MotoGP paddock. These technology advancements trickle down and contribute to the safety excellence of the suits, jackets, boots, gloves and armor offered to the public for track and street use. Recently, we had the rare (though, unintentional) opportunity to put all of these innovations to the test.

The Race Replica one-piece leather suit by Alpinestars was previously the flagship model worn by the top professionals in motorcycle road racing such as Marc Marquez, Jorge Lorenzo and Jonathan Rea. This model is equipped with stout yet comfortably-molded internal CE plastic armor protecting the knee/shin, elbow/forearm and shoulders, abrasion-resistant external armor also in the shoulder area, and softer foam padding in the chest, upper arm, hip and tailbone portions. This gear is all wrapped in a combination of cowhide and kangaroo leather and sewed up with reinforced stitching. The Race Replica suit has since been replaced by its successor, the GP-TECH, which is now the company's top-of-the-line race suit currently available to the masses

The suit we tested here has been a set of press leathers bouncing around titles for the last decade. Manufactured in January 2006, this set was just shy of its 10 year mark before finally being called to duty. Hitting the ground at speeds approaching the triple digits then tumbling through the dirt and rocks really put all aspects of the decade-old Alpinestars Race Replica leathers to the test. In addition to the Race Replica leather suit, Alpinestars Supertech R boots, Alpinestars GP Pro gloves and an Arai Signet-Q helmet rounded out the gear set.

The test was conducted in turn 5 of the “big track” at Willow Springs International Raceway. Conditions were dry, ~70° F ambient air temperature, cooked tires and a brief lapse in concentration. As I entered the downhill left-hander after a very hot qualifying lap, I decided to back the pace down a bit to get ready to exit the track a few turns later. However, the downhill entrance into an off-camber bend then uphill exit characteristics of this corner require extra throttle application to shift additional weight to the rear and not allow the front end to load up. Riders go down in this corner routinely by tucking the front from a lack of throttle, and that’s exactly what happened here.

Before I was able to react to any cautionary feedback from the bike, I went from casually hanging off the left side of the bike to slamming down onto the track surface on my left side. I slid on my left shoulder and hip head-first towards the outside edge of the track. As the bike hit the dirt, it began cartwheeling and I knew I was destined for the same fate. When I slid off into the dirt, I began barrel rolling through the rocky terrain. I held a crouching position making fists with my hands and taking the impacts on my back then knees and forearms. Through my spinning surroundings, I also kept an eye on the bike and did my best to avoid landing on it.

Once the tumbling finally came to an end, I found myself lying in a silent cloud of brown dust surrounded by only rocks and shrubs in my immediate sight. The first thing I noticed was that I was conscious, very aware of my surroundings and had no pain immediately apparent. I jumped up, popped my visor open to dump all the dirt out of my helmet, raised my hand to indicate to the corner workers that I was OK, then ran away from the impact zone and out of the line of fire of any other riders that might have similar trouble with this corner.

While waiting next to the fence for the crash truck, I did a quick once-over assessment of myself. The lack of visual damage to my suit, boots and gloves was almost unbelievable. I had just hit the ground around 80 MPH then tumbled countless times through the rough and rocky dirt and my gear seemed to show nothing more than a thin layer of dust.

After arriving back in the pits, I stripped all of the riding gear off to further assess my physical condition. Not a single scratch, bruise or chafe could be spotted, nor did I have any soreness throughout my body. Next, we cleaned all of the gear off to further inspect the damaged areas and integrity of the construction after being subjected to this beating.

The most severe areas of damage were the left shoulder/upper arm and left hip/upper thigh areas. Exterior armor on the left shoulder was ground down about 2mm in the worst areas, while the leather around the upper left arm was quite abraded but didn’t seem to shed much material. The same was true for the leather in the left hip and upper leg area. The corner of the Alpinestars branding patch on the left leg was the only section on the suit where the stitching gave way. No other seams were compromised on the entire suit and nowhere did the exterior material separate, exposing the internals.

Aside from the suit, the rest of the protective gear showed minimal signs of damage as well. The boots had small sections of abrasion on the external plastic protective armor, most notably on the upper left shin guard. The gloves had almost no visible damage or signs of a crash at all. Only a couple nicks on the knuckle armor showed signs of brief contact with the ground. The helmet had a few nicks and scratches here and there, but no major impact areas. Regardless, this lid will have to be retired since the integrity of the structure is easily compromised with even the smallest impact.

The Alpinestars Race Replica leather suit has officially passed all tests in our book. Extremely comfortable on and off the bike, very maneuverable, loaded with features, durable over the years and kept the rider safe when duty was called. This leather suit ticked all boxes.

It's especially impressive how well this set of leathers held up after a decade of constant, year-round heavy use around the world on tracks in the blistering heat, icy mornings and heavy rain storms, then thrown into the back of the van, jammed into the gear bag and onto the next project.

A product that can withstand this type of abuse and still perform the most critical duty of motorcycling (keeping the rider safe) after so many years speaks volumes for the company’s engineering, testing and dedication to the craft. Alpinestars definitely passed the test here and will continue to be highly regarded and trusted in our pits.