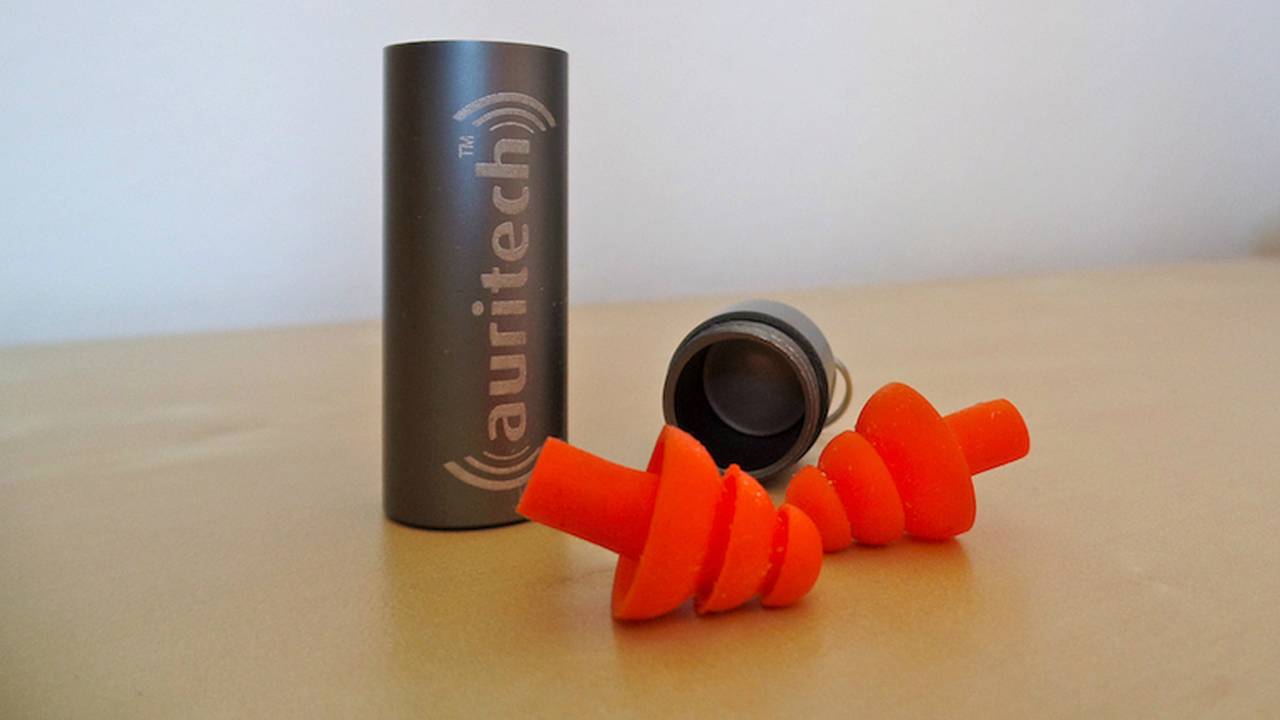 Cost: About $35 with shipping

There's nothing sexy about ear protection. Imagine some company paying David Beckham to model earplugs. Or special Deus-branded 'plugs being wantonly fondled by a bearded hipster while his waifish girlfriend slow-mo kickstarts a '65 Royal-Enfield in the background. Nope, it just doesn't work.

In fact, ear protection is a little dorky. No doubt, those riders who refuse to wear a helmet will see earplugs as ATGATT-ism out of control. But that doesn't mean hearing protection isn't important. It's a very real issue.

My grandfather lost much of his hearing as a young man, thanks to WWII artillery guns. Having to shout my every conversation with him convinced me at an early age I wanted to keep my ears protected, so I have always ridden with 'plugs.

My go-to's are polyurethane foam earplugs of the sort they hand out at rock clubs. They're handy, cheap, disposable, and the ones I use do a really good job of blocking out sound. Though, sometimes too good a job. Riding in the city, I can hear sirens and horns, but I can't understand conversation. And cars with quieter engines can sneak up on me if I'm not paying attention.

A few months ago I got a hold of a pair of Auritech Biker earplugs, which the company claims have a "precision-tuned, patented ceramic filter" that "allows conversation... to remain clearly audible, without the muffling effect of conventional earplugs."

Effectively, Auritech claims its earplugs will block out the stuff you don't want to hear, while magically allowing in the things you do. That's not exactly Auritech's pitch, but it's more or less how I translate the seven pages of information that arrived in the mail along with the earplugs.

Looking like tiny, orange Christmas trees and consisting mostly of a soft rubber, the 'plugs are smaller than the foam versions because they don't expand in the ear canal. In their center is a tiny ceramic piece that Auritech says filters out damaging frequencies, rather than just blocking all noise.

Costing roughly as much as 200 pairs of my old disposable 'plugs, the reusable Auritech Biker earplugs are designed to be a more permanent item and come with a handy aluminum carrying tube.

I've been wearing them off and on since I rode from Cardiff to Milan back in November, using them in several different riding scenarios.

Since the plugs don't expand they don't put pressure on your ear canal. The rubber, or "unique thermoplastic shell material," is durable and stands up well to my disgusting habit of flicking away earwax that occasionally collects on the 'plugs.

Because you don't have to stand there, counting "One Mississippi, Two Mississippi..." and waiting for foam to expand, these earplugs are easier to set in your ear. So they don't add more than a second or two to your pre-ride gearing up process.

I remain skeptical of the amazing claims made of the ceramic filter, but I will admit I find these preferable in urban situations. I'm able to hear people speaking to me, while at the same time not experiencing discomfort from wind and engine noise. And as a result, I definitely feel I'm more alert in city situations.

The earplugs are easily washed in warm, soapy water, or if you're lazy like me, you can leave them in your jeans pocket when you do laundry (remove before tumble drying).

I still prefer a greater level of silence when doing extended runs. If I know I'm going to be droning along at speed for a few hours I'll choose a pair of Howard Leight MAX disposable earplugs.

Additionally, the ability to keep out wind/engine noise decreases pretty dramatically as your speed heads north of 65 mph. This is especially true if you're on a naked, or some other bike that leaves you out in the wind.

If you happen to set the earplug incorrectly, or it gets jarred as you put on a full-face helmet, it can be very uncomfortable. I also find these to be less comfortable than foam 'plugs if worn for really long periods, such as when I rode 685 miles from Milan to Rotterdam in one day.

Because these are reusable, it's likely you will get into the habit of only bothering to wash them when they really need it. Inevitably, then, you will one day find yourself juggling your gloves and key and helmet, and you will absent-mindedly place the not-recently-cleaned earplugs in your mouth. And, trust me, that will be gross.

The Auritech Biker earplugs cost more than disposables, but I think it's safe to say they will last for at least 200 uses so price isn't really an issue. They're easier to wear, once you figure out how to wear them, and would allow you to still employ a Bluetooth system in your helmet.

If you're an ATGATT nerd, the fancy carrying tube makes them seem more slick and "professional" than foam earplugs, and hey, anything that can make earplugs feel even a little less dorky is probably a good thing.

Whether these are better than foam earplugs, though, depends on the type of riding you do. If you're the sort that stays off the interstate, and sits behind a nice, comfy screen, these are ideal because they allow you to hear more of the world around you. For long hauls they are less effective, but still, of course, better than nothing.

I feel the Auritech Biker earplugs are worth the cost, but I still tend to carry a set of industrial-strength foam earplugs in my jacket so I can switch according to riding conditions.

Ultimately, though, what matters is that you wear some kind of ear protection. Because this is the thing about hearing: once it's lost, it doesn't come back.