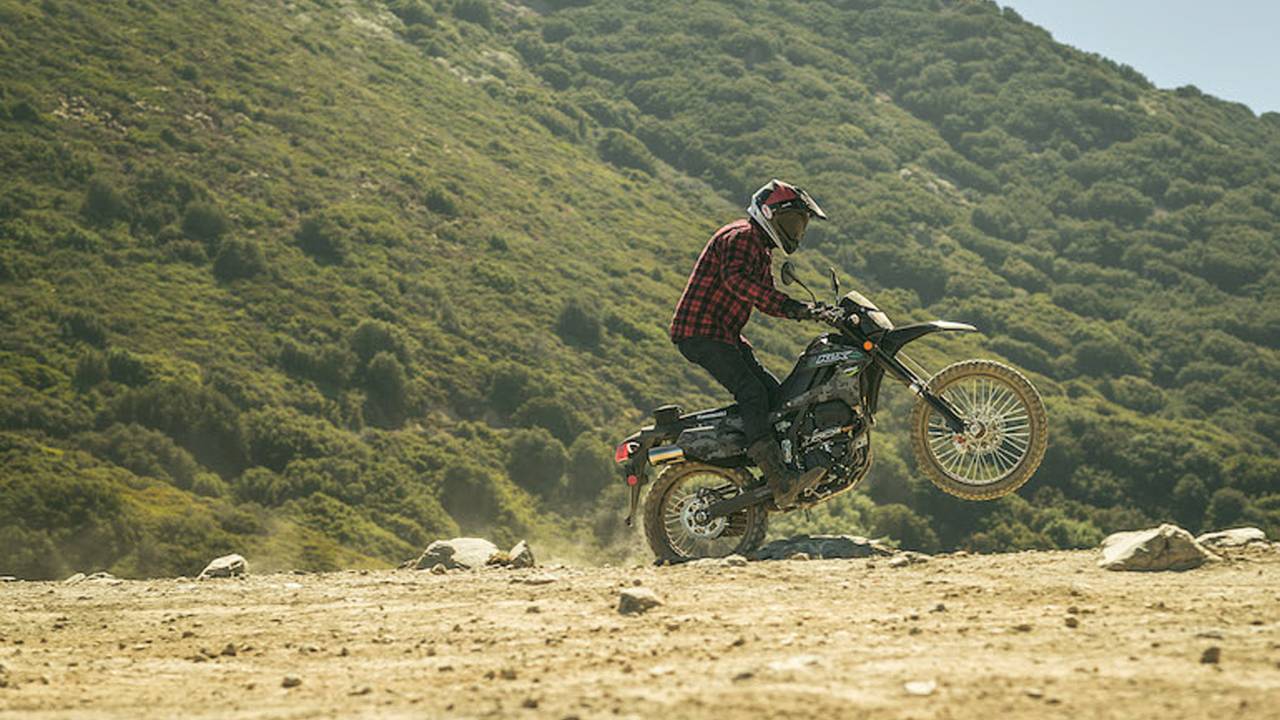 Adam Waheed takes the newly returned Kawasaki KLX250 out for a spin and likes what he sees on this entry-level dual-sport.

Small displacement motorcycles are the rage and after being absent from Kawasaki’s US model line-up for a few years, the green team has resurrected its 249cc single-cylinder-powered KLX250 for 2018. Digital fuel injection replaces mechanical carburation along with a special Matrix Camo colorway in the vein of its bigger, more worldly KLR650 brother. But will it continue to offer easy dual-sport fun? Kawasaki USA wanted us to find out by letting us spend a day aboard this license-plated on/off-road bike.

READ MORE: Why I Bought a Kawasaki KLR650 | RideApart

Some might wonder why this US $5,349 bike disappeared in the first place. Kawasaki says sales fell off in 2014, so it covertly removed it from the line-up. A couple years later, it noticed reinvigorated interest, but before returning it a 10-hole fuel injector was retrofitted to make it cleaner running and easier to live with. This update mitigates the cold-blooded nature of this four-valve single. Where the old bike would be fussy to start after a chilly night in the garage, the FI makes things easy. No fuss, no muss.

Get out and explore. With the affordable KLX250 you have little excuse for not getting off… the pavement.

The KLX250 feels more like a dirt bike than a street. It’s a compact motorcycle that will be easy to ride for all but those that are abnormally height challenged.

Around town is where this small KLX shines. With a 304.3-pound curb weight its handling is effortless and it slips through spots where thicker multi-cylinder bikes just can’t go. While the seat height is a tad high (35 inches), if you're of average or above stature you’ll manage just fine. The steel handlebar is typical dirt bike, with a slightly lower bend. It can be easily replaced with a aftermarket setup if desired.

The manual clutch is friendly to operate and, paired with the engine’s modest power, launches from a stop are a piece of cake. If you gun the engine off the line and work the six-speed gearbox you’ll likely outrun traffic at a stop light, but it does take some effort. There’s quite a bit of engine vibration, too, and things get buzzy at 70 mph. The KLX can certainly run on the highway, but it’s not exactly the “happy place” for its rider— especially for extended distances in top gear.

Be seen, or not. The Matrix Camo colorway allows you to better blend into the background.

With its off-road ready 21-inch front and 18-inch spoked rear wheels the KLX is ready and willing to romp in the dirt.

Off road, the engine certainly responds best with revs— encouraging hard charging rides— especially when any degree of incline is encountered. If you’re looking for extra oomph, we’d recommend removing the noise-cancelling airbox snorkel as well as fitting an aftermarket exhaust from a reputable brand like Yoshimura. Shorter final drive gearing (bigger rear sprocket size) would also increase the KLX’s off-road aptitude, at the cost of outright top speed.

Since this is basically a softly-sprung 250cc dirt bike with lights, the narrow seat won’t provide freeway riding comfort, but for short jaunts it performs fine. Factor in the small but functional 2-gallon fuel tank and you can expect a range of upward of 100 miles between fill-ups. A low-fuel light has been added, taking some of the worry out of things. The digital instrumentation is easy to read while riding.

The KLX250’s engine responds best with lots of revs.

The KLX250 works for short jaunts around town; if you’re looking to log big miles, you’ll do better with a more road-based Kawasaki motorcycle.

Rolling on an off-road friendly 21-inch front and 18-inch spooked wheel setup, the KLX is ready and willing to be ridden past pavement. The budget-oriented stock Dunlop semi-knobs provide decent grip on loose and paved surfaces alike, and the laced wheels are tough enough to sustain rocks, holes, and whatever else you’ll typically find on a well-traversed trail.

The suspension is sprung more heavily than the red competition but isn’t ready to blitzkrieg trails like a pesky blue or orange bike we know. Still, with 10 inches of forward travel and 9.1 inches at the rear, the suspenders get ‘er done and we appreciate compression damping at the front, and compression and rebound damping at the rear – in addition to spring preload adjustment. Not bad for a so-called entry-level bike. The softly-serrated footpegs are a nice touch but they should be bigger, and there are nifty foldable passenger pegs if a friend wants to tag along.

A pair of disc brakes keep speed in check and we are especially fond of the power and feel of the back brake. Front lever position adjustment would be nice but considering its price, we won’t knock it.

We didn’t ride at night so we can’t comment on the function of the halogen headlight or taillight but considering the popularity of LED setups, it would have been nice if Kawi would have fitted this type of lighting — especially for those planning on riding after dark.

We appreciate the softy-serrated footpegs, however they could be larger.

The digital instrumentation is simple and easy to read. It also now includes a 'low fuel' light.

With the return of the KLX250, Kawasaki effectively fills a void in its motorcycle line-up. Although we’d be lying if we didn’t say we’d like to see a couple more changes – including a more powerful engine, larger footpegs, and LED lighting – it’s a hard mount to knock. Especially in its attractive (and covert) digi-camo color scheme ($200 premium).

The KLX250 is powered by a water-cooled 249cc single capable of upward of 50 mpg.

Disc brakes front and rear along with 10 inches of forward suspension travel make for a capable and fun dual-sport.