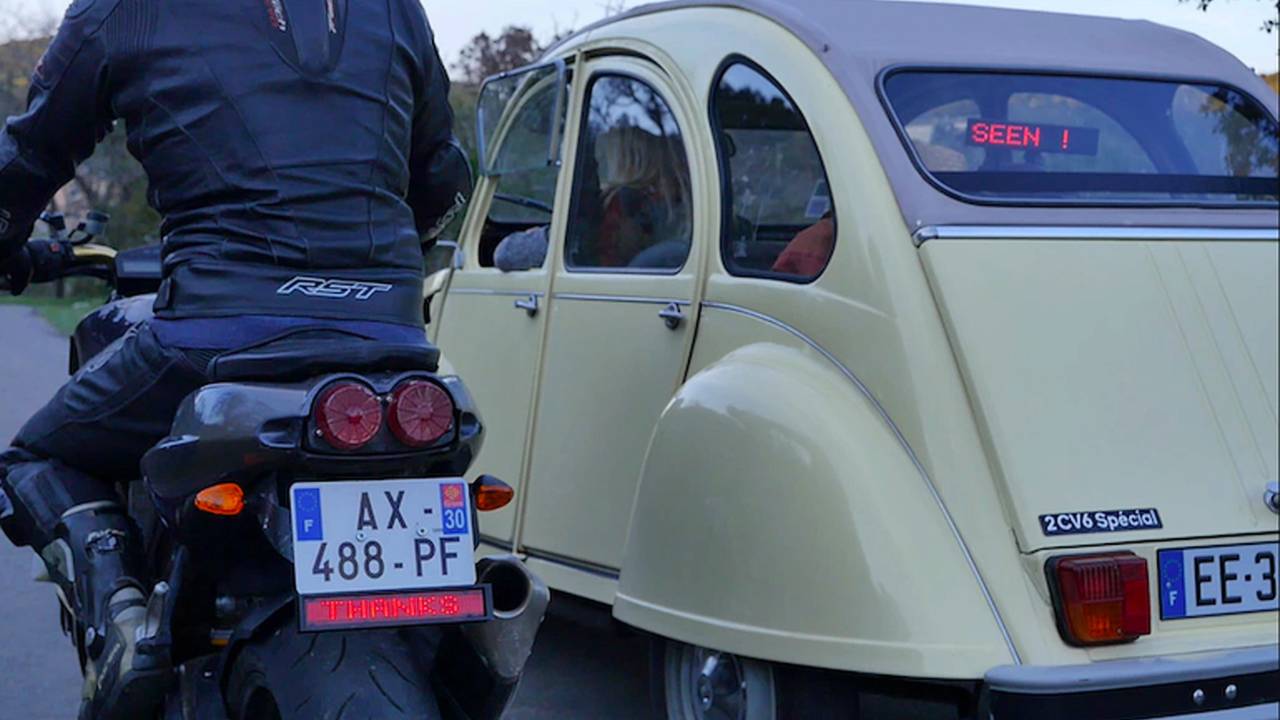 Kickstarter offers another invention nobody asked for with the MOTOCHAT, enabling cars and bikes to display messages and alerts via a rear-mounted screen

Kickstarter is no stranger to harebrained product ideas, from Fish on Wheels to Paul: The sexiest smartphone charger on the planet to my personal favorite; Roxzai: the rock stacking game (they’re literally selling you a bag of rocks, and somehow doubled its goal!), there’s no shortage of ill-conceived ideas out there. In the past we’ve featured some motorcycle-related Kickstarter campaigns— the majority of which have at least some merit to them. However it’s hard to same the same thing about Motochat, a new Kickstarter campaign out of France that aims to bolster motorcycle safety by introducing a small, horizontal, rear-mounted screen that can display messages.

The gist of the product is that it will allow you to better communicate with other vehicles on the road without having to scream through your helmet. To me this seems like a wildly unnecessary device, though Motochat’s creators argue that the device boasts a number of features that can improve safety. For example, when emergency braking, the screen automatically displays “WARNING”. On paper this isn't a terrible idea, albeit I would argue that by the time a driver reads the message and then registers the thought in their brain, it will be way too late to have any real effect.

While I don't think Motochat would make one's riding experience more dangerous, I question how much it really helps

I will admit there are a couple of ideas from Motochat that aren’t all bad. It can act as an emergency transponder, sensing a crash and then sending a text and GPS location to a pre-selected phone number. It does this via a three-axis gyroscope and accelerometer that can measure speed and lean angle (and a GPS tracker, obviously). The devices also charge via a USB port and sync via bluetooth to smartphones where a message can be typed out that will then appear on the screen. This does probably mean it will take at least a minute or two in-between having a thought and having it appear on the screen, assuming you can manage to type a message in while wearing gloves while piloting a moving bike.

not a bunch of obscenities" draggable="false">

I'm sure Motochat would be mostly used for messages like "Thank You", and "Break", and not a bunch of obscenities

MORE MOTO KICKSTARTERS: MirrorLok is here to up your bike’s reflection game

The device comes in a variety of designs that range from flames to tacky fake carbon fiber to camo, to faux wood (and more!). None of these are, shall we say, my style. Motochat is also available for cars under the Carchat moniker. It also appears I’m not alone in my thoughts towards Motochat, as almost halfway into the campaign the Kickstarter page has only generated about $400 from a total of four backers, generating almost one percent of Motochat’s more than $40K goal. With “early-bird specials” for Motochat units starting at roughly $100 (and roughly $75 for Carchat), it doesn’t appear this campaign will reach anywhere near its ambitious goal. Having said that, in July of 2014 one Zach Brown of Columbus, Ohio raised a mind-blowing $55,000 after initially asking for $10 to make potato salad, so you never know.

You can watch Motochat's extremely Gallic kickstarter video below. It's well worth the three minutes and 40 seconds for the Deux Chevaux alone.

For more info or to contribute to the MOTOCHAT campaign, you can check out the product's Kickstarter page by clicking here.