Visiting India and Kazakhstan for the first time.

From year to year, the MotoGP calendar only undergoes modest modifications. Age-old traditions and multi-year contracts play a role in those copy-paste jobs, but MotoGP organizing body Dorna is intent on expanding the series’ appeal and reach. That initiative led to a flurry of new contracts signed in September, 2022, alone.

From Saudi Arabia to India to Kazakhstan, Dorna’s inkwell is running low after securing deals with three future venues. Two of those countries, India and Kazakhstan, will host a Grand Prix as early as 2023. Those additions are helping to reshape MotoGP travel schedules in the new year. 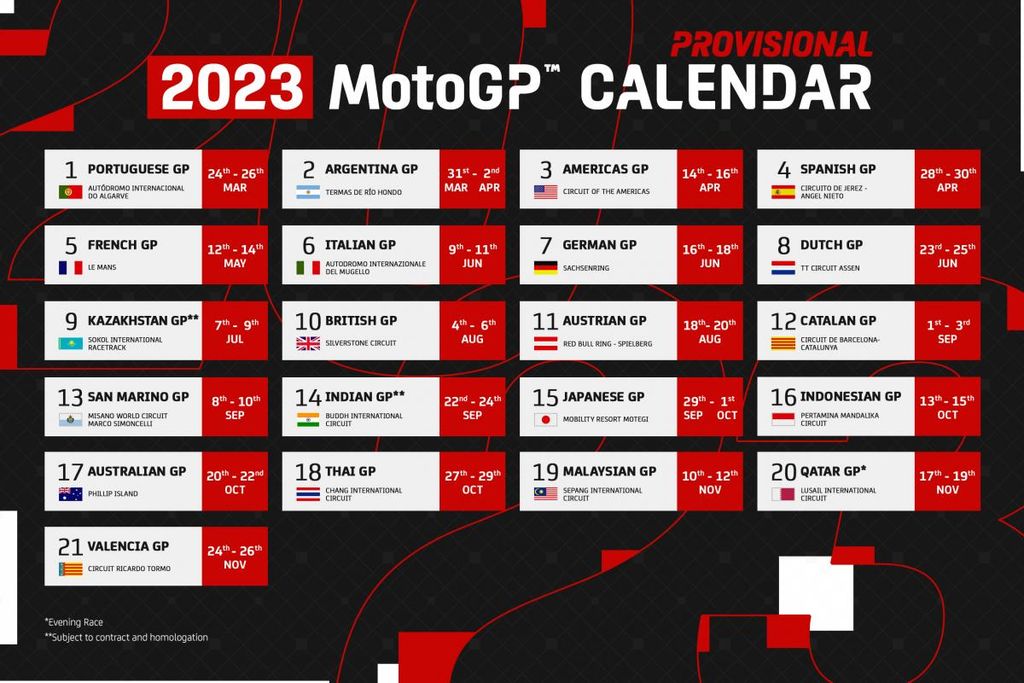 The calendar then swings back to Europe for the Spanish, French, Italian, German, and Dutch Grands Prix. The inaugural Kazakhstan Grand Prix will conclude the first half of the 2023 season on July 9, 2023.

When the races resume, the second European stretch will commence at Britain’s Silverstone Circuit. The Austrian, Catalan (Spain), and San Marino (Italy) GPs will follow, but MotoGP organizers nixed the Aragon GP for 2023.

The flyaway rounds start with the Indian Grand Prix on September 22-24, 2023. The Japanese GP remains in its conventional slot, while organizers shift the Indonesian Grand Prix to the latter half of the season. Shortly after, the Australian, Thai, and Malaysian rounds will now lead up to the Qatar GP on November 17-19, 2023. Per usual, MotoGP will close out the season at Spain’s Valencia Grand Prix.

While it’s exciting to see Kazakhstan and India make the schedule so quickly, we should caveat that both rounds are still subject to contract and circuit homologation approval. MotoGP previously planned to race at Finland’s KymiRing circuit but sub-par track conditions ultimately derailed the deal.

Hopefully, history doesn’t repeat itself with the Kazakhstan and Indian GPs. If the Provisional 2023 calendar goes unchanged, MotoGP will set its single-season race record with 21 rounds in 2023.