The Honda Rebel, be it in either 300 or 500 trim, is undoubtedly an excellent choice for any beginner rider looking to start out on a cruiser. The bike, after all, has all the design cues of a heavyweight cruiser, while packing quite a punch for its size. As such, it isn't really surprising that the Rebel 500 hasn't changed much since it launched in its current form in 2016.

Meanwhile, Honda shook the cruiser world and flipped it on its head when it unveiled the Rebel 1100 back in November 2020. Powered by the trusty parallel-twin motor found in the Africa Twin, the Rebel 1100 indeed proved to be quite the power cruiser. That being said, and with 2022 just around the corner, Honda has pulled the veils off the 2022 renditions of both the Rebel 500 and Rebel 1100 slated for launch in the European market early in 2022. Naturally, the U.S. and Asian markets will follow shortly thereafter.

Kicking things off with the smaller bike of the two, the Rebel 500, designated CMX500, doesn't get any mechanical or feature updates. As they say, if it ain't broke, don't fix it. As such, it retains its 471cc lawn mower-esque parallel-twin motor rated for around 47 ponies. It does, however, get one new color option which Honda is calling Pearl Organic Green. This color in particular is a stark contrast to the dark and stealthy colors currently available for the Rebel 500. Honda will, however, be retaining the other three colorways which consist of Matte Jeans Blue Metallic, Graphite Black and Mat Axis Gray.

The bigger, badder Rebel, too, comes virtually unchanged for the 2022 model year—understandable, as the bike itself is still rather fresh, and several markets have yet to get a taste of this welterweight power cruiser. It does, instead, come in a flashy new color called Pearl Stallion Brown—kind of reminiscent of the color of a horse's glossy sheen as it gallops away in the sunset. Perhaps that's why they called it that. Other than that, the 2022 Rebel 1100 remains mechanically identical to that of the 2021 model. 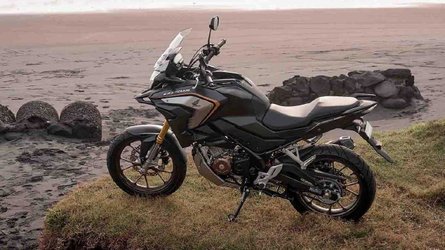 The New Honda CB150X Is A Baby ADV Ready To Explore