Engineer Marek Foltis says he just wants other people to not give up on their dreams.

Are you the type of person who’s super good at starting projects, but not quite as good at finishing them? If so, then you’re exactly who Czech engineer Marek Foltis wants to encourage. Over the past two and a half years, Foltis has been working to make his dream of a previously unseen motorcycle engine design a reality. In November 2021, he proudly introduced his completed Bistella 500 project to the world.

The name “Bistella” comes from the engine configuration. Foltis created a supercharged two-stroke, ten-cylinder engine. To keep the design compact enough to fit inside the 1953 Jawa frame he wanted to use, he chose a stacked radial configuration. The final design consists of two separate star shapes, which are each composed of five cylinders taken from vintage 50cc Jawa engines. Are you somehow both exhilarated and also exhausted while reading that? There’s more.

It’s probably helpful at this point to understand something about Foltis’ mindset during this project’s inception. By his own admission, he “set a goal to make this project on the edge of mechanical complexity.” Hence, the incorporation of 10 cylinders in the first place. For those keen to know all the ins and outs of how he did it, he wrote up a bunch of notes and tech data on his official website for the project, which we’ll link to in our Sources.

Using 10 separate 50cc Jawa engines and five roots-type supercharger assemblies, Foltis created the extremely bonkers Bistella 500. According to him, the Bistella is currently limited to about 60 horsepower at 6,500 rpm. However, by his calculations, he says that it’s capable of about 120 hp at 10,000 rpm when unrestricted. For road legality purposes, though, he keeps it to a modest 12 horsepower. Weight is 155 kilograms, or just under 342 pounds.

Suspension and brakes are all stock due to Czech government regulations, so Foltis could keep it road-legal. The frame came from a 1953 Jawa 18, which he also did not modify. He says that he installed a transistor-controlled ignition to keep things manageable.

The completed project looks and sounds like complete madness. What’s especially interesting about Foltis’ writeup of the process, though, is that he details all the failures he made on the road to completion. Remember how we said he wants to inspire people to push through and finish their projects, whatever they might be? That’s exactly why he included all the frustrating parts.

In the end, it doesn’t matter if something doesn’t work perfectly the first time. Failures along the way are how you learn, and also how you improve. As long as you get back up after you’re over that initial disappointment, and you keep going, eventually you’ll get it done. As Foltis wrote, “we are stronger than we think, and we have to push hard to find our strength.” 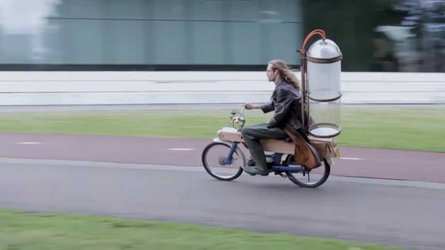 Dutch Engineer Converted His Honda Moped To Run On Methane
⠀ 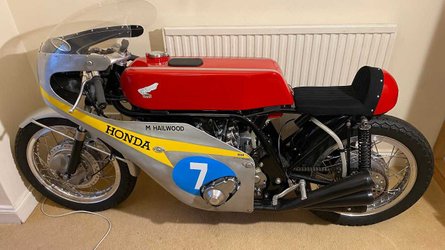 Here's How Allen Millyard Turned A Four-Cylinder Engine Into Six