MotoAmerica Expands 2022 King Of The Baggers Series To 6 Rounds

The three-race 2021 King of the Baggers season may have been short-lived, but it wasn’t short on drama. After a duel to the finish line between S&S Cycle Indian Challenger rider Tyler O’Hara and Screamin’ Eagle Harley-Davidson rider Kyle Wyman in the opening round, only five points separated the two factory riders. Unfortunately for O’Hara, his series lead quickly crumbled after a DNF (Did Not Finish) at Harley’s home race at Wisconsin’s Road America track.

Wyman capitalized on the opportunity, gaining a 20-point lead going into the final round at California’s iconic Laguna Seca circuit. Instead of playing it safe, Wyman capped off the rider’s championship with a victory, stretching his lead over O’Hara to 25 points and giving the Motor Company its first King of the Baggers crown. 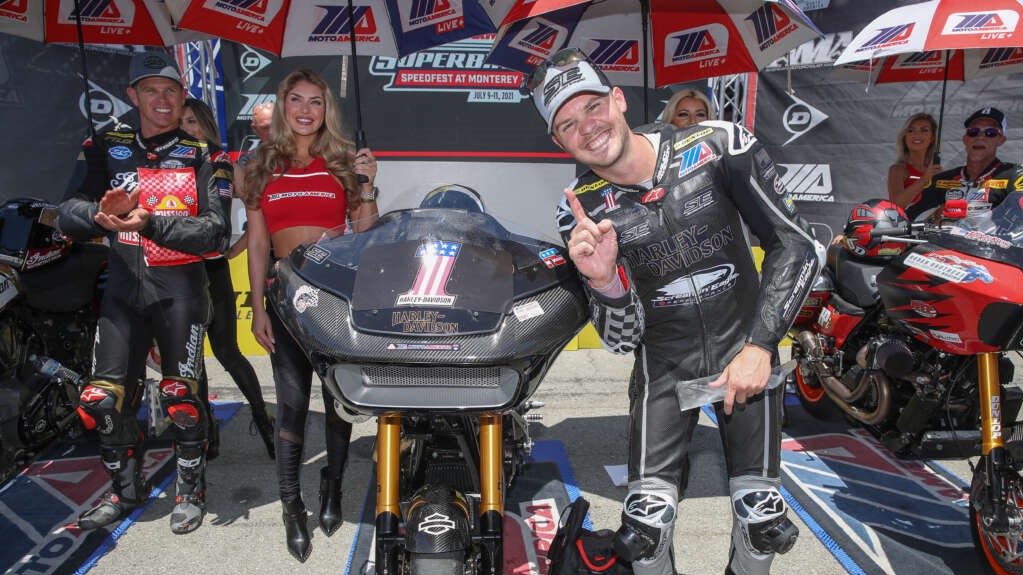 While Indian’s mechanical malfunction in the second round effectively ended its title chances, the crowds still turned out to see the V-twin touring machines on the raceway. With the series gaining popularity, MotoAmerica recently announced that the 2022 King of the Baggers season would begin at the Daytona 200 along with the rest of the MotoAmerica classes. Now, the organization is releasing a six-race schedule that will only amplify the drama in the upcoming season.

“The popularity of last year’s three-round King Of The Baggers Series was such that it left our fans, teams, sponsors, and racers wanting more,” proclaimed MotoAmerica President Wayne Rainey. “So, we are giving them what they want – a six-race championship held at the three tracks that the Baggers competed on last year with an additional three rounds, including our first visit to Daytona International Speedway, added to the series.”

In addition to the baggers battling on the banked walls of Daytona, the series will return to Road Atlanta from April 22-24, 2022, Road America from June 3-5, 2022, and Laguna Seca from July 8-10, 2022. On July 29-31, 2022, the series will shift to Indian’s home race at Minnesota’s Brainerd International Raceway before the final round takes place at New Jersey Motorsports Park from September 9-11, 2022.

Hopefully, six rounds and a home race for both Harley and Indian will make the competition closer than ever and produce the drama we’ve come to expect of the King of the Baggers.

2022 MotoAmerica King Of The Baggers Championship: