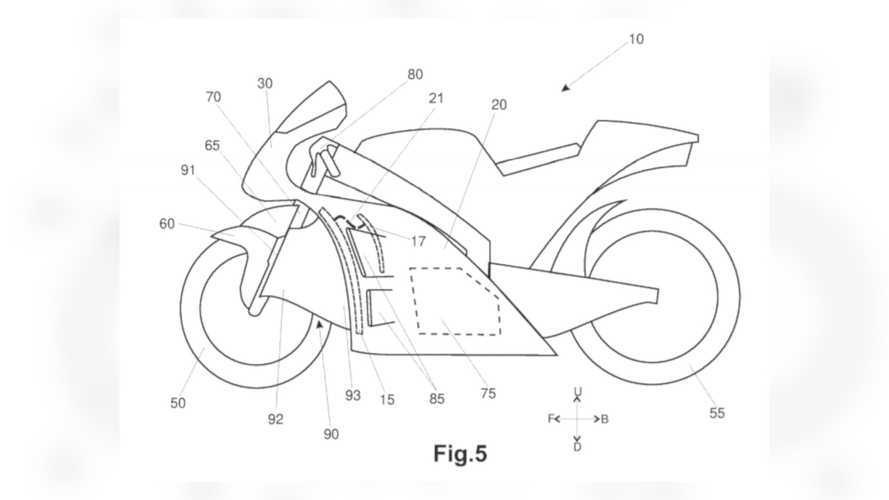 Yet another thing to include in our letter to Santa this year.

When you’re a company with racing in its blood like Aprilia, you spend significant time and money on innovative ways to go faster. Engineers working on MotoGP and other race bikes are, by necessity, always innovating according to whatever the most current set of rules is. When those rules change, that means anything you already had in the works that now violates the updated rules has to go straight in the bin, right?

Not so fast, because of course, Aprilia doesn’t only make race bikes. Aprilia also makes the RSV4, which is very much a production, street-legal superbike. From the RR to the Factory, there’s surely an RSV4 variant to knock your socks off once you get over those new-bike tinglies and get used to riding it. Still, even the best bikes can always get better, and a brand new aero-focused patent filed with the World Intellectual Property Organization on June 11, 2020 certainly would make a lot of sense if it showed up on an updated RSV4.

Look Into The Future:

What Is Yamaha Planning With This Leaning Trike Patent?

To be clear, we have zero indication that this is Aprilia’s actual plan going forward. Ben Purvis over at Bennetts BikeSocial slid those speculative puzzle pieces together in a way that we very much want to be true, and we’re pretty sure you will, as well. So, what’s the patent that looks so exciting?

It’s extra cool (pun possibly intended, as you’ll see in a moment) because it solves two major water-cooled bike problems at once. Most bike designs stick the radiator(s) in a familiar place, just behind your front wheel, strapped to the front of the engine like some kind of boxy, rectangular figurehead. Aprilia’s patent would stick air intake ducts in front of the rad, flowing up alongside the front wheel to suck in undisturbed air and keep that sucker as cool as you like. There are multiple possible configurations to optimize cooling, depending on how many radiators or separate radiator segments are involved.

By rerouting the airflow in this way, Aprilia is effectively bypassing airflow interference problems caused by placement of the front wheel in relation to the radiator. A knock-on effect of this improvement is that Noale could in turn make a smaller, lighter radiator due to these efficiency gains. Pretty nice bonus, eh?

If that’s not enough, there’s an active component to this design as well, in the form of a flap that activates based on fork compression. Just a brilliantly deployed bit of carbon fiber engineering origami effectively prevents airflow from causing that dreaded parachute effect between your bike’s cowl and front fender as you push for more speed.

As always, no idea what the future holds, and when or if Aprilia will incorporate this into any future street-going bike designs, much less the RSV4. Just because it’s what we want doesn’t mean it’s what will happen. It’s always fun to dream though, isn’t it?