That's a Himalayan under there?

Royal Enfield motorcycles are great candidates for custom builds. With a classic aesthetic, affordable price tag, and simple machinery, the brand practically begs customizers to modify its models. While many motorcycle builders are happy to oblige, Indonesian architect Julian Palapa wanted to try his hand at bike design. The result is a Royal Enfield Himalayan turned urban tracker named the .02View.

As the founder of the Hello Kilau architecture firm, Palapa already enjoys a successful career as a designer. However, translating those skills to motorcycles was a challenge the architect couldn’t resist. When PT Distributor Motor Indonesia (DMI) held a design contest centered on the Royal Enfield Himalayan, Palapa submitted his unique design like any of his past building plans. When Palapa’s moto blueprints took the top prize, the architect knew he was going to need some help from established builders to realize his vision. 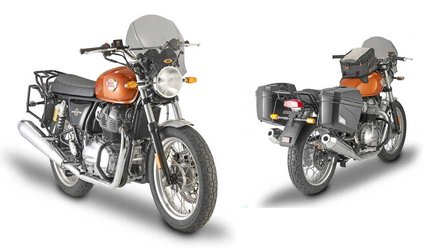 Kappa Can Turn Your Royal Enfield Interceptor Into A Touring Bike
⠀ 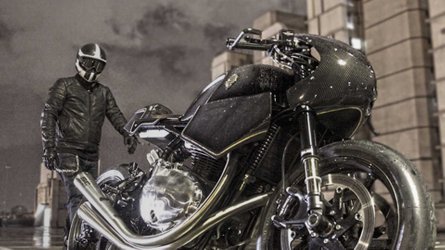 Royal Enfield Brings Bike Customizers To You In Its New Series

Partnering with MDA Detailing and Garuda Motorsports, Palapa approached the build with three key elements in mind: structure, function, and aesthetics. With a shared goal in mind, the team set out to transform the small-displacement adventure tourer into a muscular urban tracker.

Palapa’s first objective was to lower the Himalayan’s height and reduce the wheelbase. The builders accomplished both targets by replacing the stock front end with a Showa USD SFF unit, complete with custom-fabricated triple trees, and a shorter, bulkier swingarm. The modifications led to a 40mm (1.5 inches) drop in height and an 80mm (3.1 inches) narrowing of the wheelbase.

To give the .02View a stockier appearance, Palapa’s team equipped the front wheel with a larger Nissin caliper and stronger Brembo unit out back. Wrapping both wheels in Shinko E805 donuts, the Himalayan quickly turned from a svelte off-roader to an urban bruiser. Palapa further fortified the build with a rear wheel cover made of galvalume, a material commonly used in his architecture projects.

Of course, we can’t forget the boxy yet sleek design of the gas tank, tail section, and headlight housing. Inspired by trackers from the ‘70s, Palapa sculpted the .02View to meet both form and function. The team refused to compromise on either point with features like a shortened and streamlined subframe housing the Himalayan’s electronics.

“The presence of .02View is not to compete. Not to show who is superior,” said Palapa. “I only present a new, personal perspective from an architect, in modifying motorcycles.”

Though Palapa’s display of humility and grace is becoming, we wouldn’t be surprised if some custom builders feel threatened by the architect’s first outing. We would be intimidated by the burly build as well.