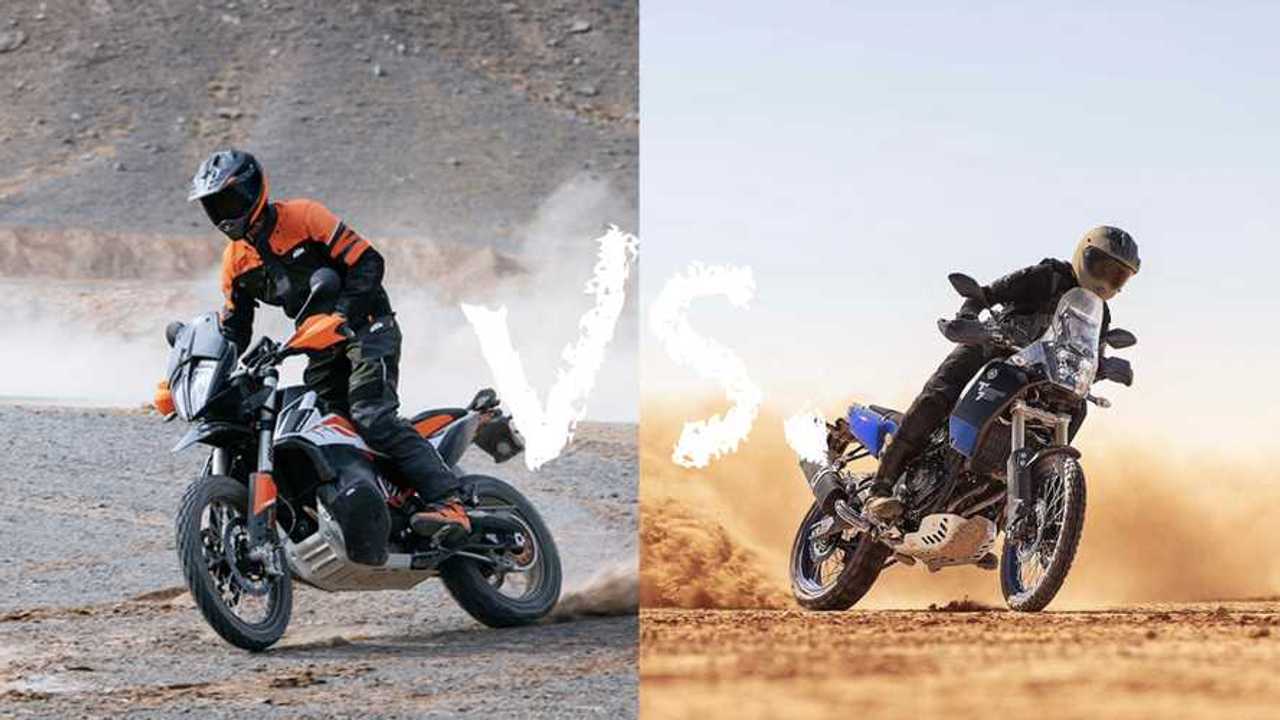 What a time to be alive for adventure bikes enthusiasts. The segment is thriving and manufacturers are gradually all throwing their hat in the ring. ADVs are more popular than ever and they know that they could miss out big time if they don’t act quick. In recent years, big-displacement adventurers have been all the rage with new models and new generations introduced almost every year. With every new launch, the bikes became bigger and heavier, leaving the sub-1000cc segment wide open.

Then, circa 2018-2019, companies started waking up and a new trend emerged: the mid-size dual-sports. Models like the Moto Guzzi V85 TT, the BMW F850GS, and the Royal Enfield Himalayan started flooding the market, populating the gap left by the constant ADV supersizing. For this week’s Spec Showdown, we decided to take a closer look at two of the most hyped models in the segment: the long-awaited Yamaha Ténéré 700 and the amped-up KTM 790 Adventure. How do they stack up? Let’s find out.

KTM has a reputation for making high-po bikes that tend to overshadow their competitors’ performance. The 790 Adventure is no exception, and at 95 horsepower and 66 lb-ft, Team Orange’s mid-size adventurer has a clear lead over the Yamaha, despite both running on a parallel-twin engine.

The KTM’s 110cc displacement advantage is partially responsible for the 23-horsepower difference. The KTM also uses a ride-by-wire throttle which makes the throttle input more efficient versus the Yamaha that uses a more old-school (and more straightforward) cable throttle setup.

When discussing dual-sport models, however, power isn’t the only number that matters. You also need to consider how far the bike can take you. The Ténéré 700 is equipped with a 4.2-gallon fuel tank and Yamaha claims that its fuel economy rating hovers around 56 mpg, which should result in a range of 235 miles, give or take. KTM says the 790 rating sits at about 4.19L/100km which converts to 56 mpg in American. On its 5.3-gallon tank, this means the 790 could go as far as 294 miles. Keep in mind that those are advertised numbers, you’ll likely get a smaller range in real life.

Size wise, the two bikes are fairly similar. The 790 tips the scales at 417 pounds dry which means that fully loaded, it likely weighs about as much as the Ténéré, possibly a bit less. The Yamaha stands a little taller than the KTM with a seat height of 34.4 inches versus 33.5 and a ground clearance of 9.4 inches versus 9.1. This makes the KTM slightly more approachable, especially to shorter riders though, let’s be real here, they both stand fairly tall.

When it comes to hitting the trails, both the Japanese and the Austrian adventurers are capable off-roaders, though the former is slightly advantaged thanks to more suspension travel.

Both receive a set of 21 and 18-inch wire spoke wheels, wrapped in Pirelli Scorpion Rally STR on the Ténéré and in AVON Trailrider on the KTM. As for stopping power, Yamaha opted for dual 282mm discs paired with Brembo calipers for the front wheel and a single 245mm hydraulic disc with a Brembo caliper at the back. KTM equipped the 790 with a pair of 320mm discs with two four-piston calipers at the front and a 260mm disc at the back.

The 790 also features an Off-Road riding mode that modifies the power delivery and allows for more rear wheel slip—something the Ténéré doesn’t have.

To a certain extent, we could almost say that the KTM has a more luxury-oriented take on adventure riding. It offers more features than the Ténéré, including cornering ABS, traction control, cruise control, a quick shifter, and even Bluetooth connectivity. The Yamaha is an entry-level, minimalistic, and straightforward option. There are no fancy electronics on the Ténéré—the model is designed to offer a purer, more old-school experience.

This reality is reflected in the price point, as the 2021 Yamaha Ténéré 700 starts at a palatable $9,999 while the fully-loaded 2020 KTM 790 Adventure is priced at $12,499. If you’re getting started with adventure riding or plan to travel on the road as much as on the trails (or more), then chances are the KTM will be more convenient. If on the other hand, you want a bike you’ll be able to wrench on yourself or think fancy techs are overrated, you’ll be perfectly happy with the Yamaha—especially for the price.