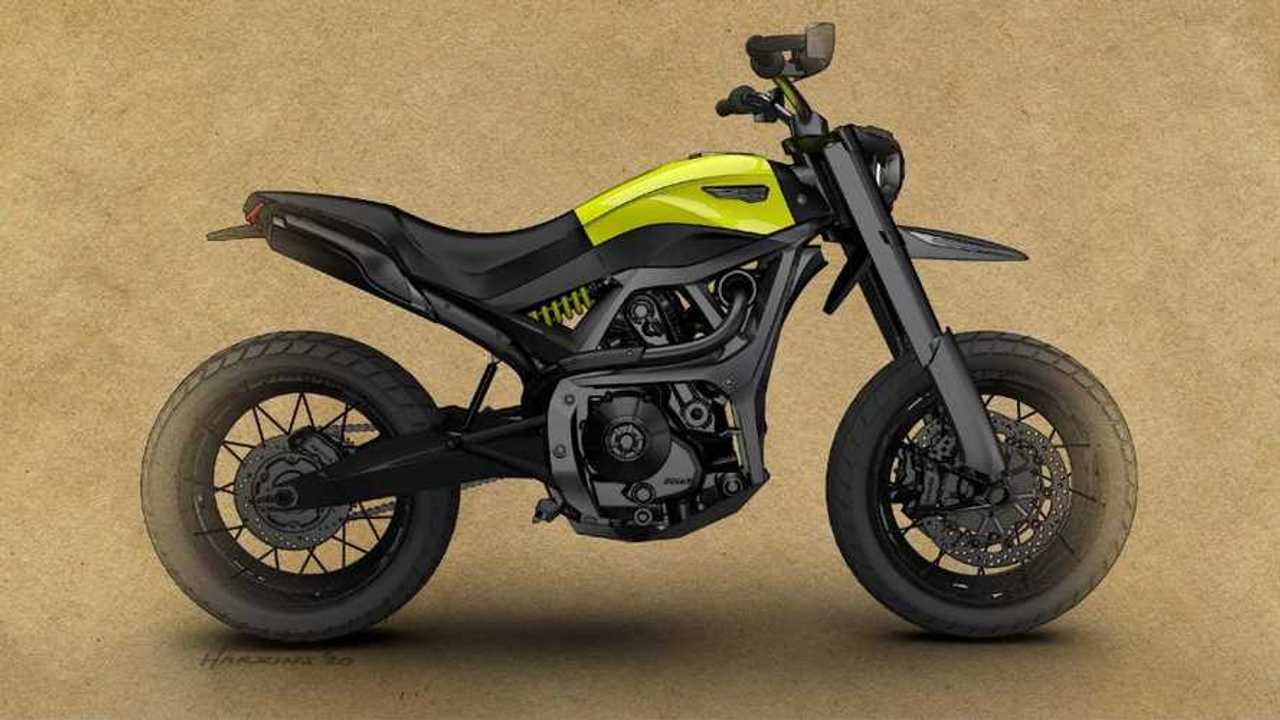 Looking back to look forward.

Ducati produced the original Ducati Scrambler from 1962 to 1976. As a precursor to today’s dirt bikes, the company offered the single-cylinder scrambler in various engine sizes between 125cc and 450cc. In 2015, the Borgo Panigale firm revived the Scrambler nameplate and created one of the most successful modern-classic platforms on the market today.

Featuring an air-cooled, Desmodromic, four-vavle L-twin, the new Ducati Scrambler toes the line between heritage and hereafter. Whether you prefer the 399cc, 803cc, or 1,079cc variant, the Scrambler lineup covers the spectrum of rider skill and experience. Though the ever-popular model continues to rake in dollars for Ducati, evolution is inevitable. With an eye to the future, the Bologna brand collaborated with the ArtCenter College of Pasadena for a design contest centered on the future of the Ducati Scrambler—and one lucky winner was awarded an internship at Ducati’s Style Center in Borgo Panigale.

“The collaboration with the ArtCenter College of Pasadena has given rise to an interesting exchange of experience with students from different cultural and academic backgrounds,” said Ferraresi. “They have reinterpreted our Scrambler Ducati in a creative way. They all have very distant points of view.”

After much deliberation, Faraud and Ferraresi—along with the Scrambler Brand Unit —determined that Peter Harkins' design realized the brief best. Drawing on numerous inspirations, Harkins' design returned the Scrambler’s engine to a single-cylinder layout and futurized the styling. The Scrambler’s current tubular steel trellis uses the engine as a stress member, but Harkins decided to cradle the single behind cast aluminum frame.

Aside from the functional elements, the ArtCenter student’s design included iconic Scrambler elements like a high-mounted exhaust, neutral ergonomics, and the classic yellow tank. Handguards, an off-road front fender, and sleek tank silhouette borrow from the Hypermotard, but also push the Scrambler forward.

“It maintains the typical stylistic canons of the Scrambler Ducati,” noted Ferraresi. “This includes lightness, simplicity of lines and the headlamp. It is characterized by the unmistakable X, now recognized as the signature of the bike.”

We’re excited to see how Harkins' drawings influence the trajectory of the Scrambler lineup. Though the contest was an exercise in design and numerous tweaks would be needed before production, the possibilities are exciting and encouraging.

“I am extremely excited to be working alongside such a talented group of designers at Ducati,” said Harkins. “This is a dream come true!”

The Ducati Scrambler’s storied history continues to push the platform into the future and we can’t wait to see where it goes beyond 2020.