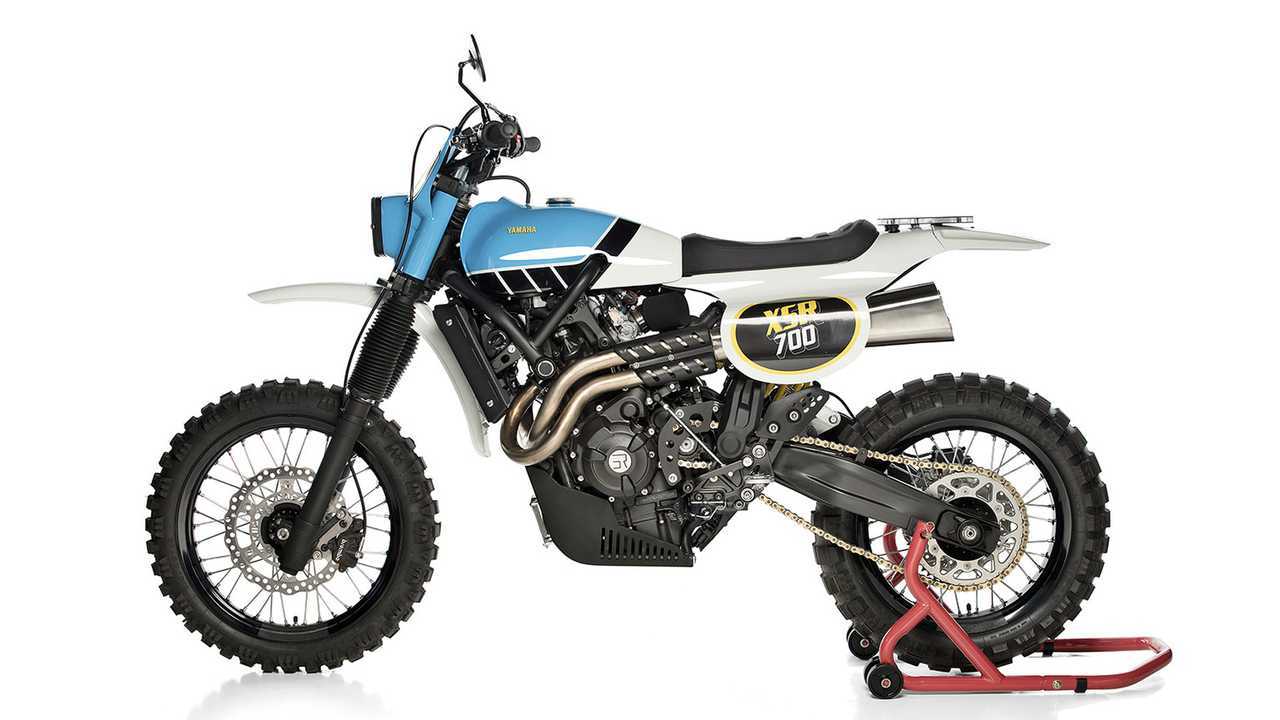 Scrambler all the things.

Yamaha hasn’t been particularly active in the vintage revival movement. It (very) briefly sold the SCR 950 before settling for the XSR 700 and 900 duo which, compared to how other brands are tugging at the nostalgia strings, doesn’t exactly scream retro. Chasing the trend might not be Yamaha’s priority but that doesn’t mean we can’t imagine what could be should Team Blue decide to shift into second gear.

French motorcycle website Moto Station sparked a discussion about whether Yamaha should consider adding a scrambler version of the XSR. My answer was obviously yes—because scrambler all the things—but it made me want to share a few thoughts with you and see what you think about it.

The picture (on top) is of a custom XSR 700 scrambler built by Portuguese builders Nuno Capêlo and Ricardo Santos for Yamaha Portugal to enter in the company’s 2019 Yard Built contest. It’s not a production model but doesn’t it make you want to see it added to the Yamaha lineup?

Think about it: right now, Yamaha has three models running on the same 689cc twin—a naked sport (MT-07), a standard (XSR 700), and an ADV (Ténéré 700)—a platform that has more than proven itself. Now picture a crossover between the XSR and the Ténéré. How cool would that be?

Though we have yet to get the Ténéré in the U.S., the model has been well received in Europe so far and the XSR is a classic take on the FZ-07 (turned MT-07), a favorite in the lineup. That looks like a winning recipe to me.

Why am I making a case for a scrambler rather than a fully-faired sportbike? First off, because the company already has a good thing going on with the R lineup and that an R7 would step on the R6’s toes (especially an R7 with a twin rubbing elbows with the R6 and its inline-four).

Plus, Yamaha has a rich history of trail and desert adventures. Consider this: French rider Cyril Neveu won two Paris-Dakar rallies back to back, including the very first event in 1979, and he did so in the saddle of a Yamaha XT500. The first-ever Dakar win was on a Yamaha. Shouldn’t Team Blue celebrate that legacy?

I’m totally here for a 700-based scrambler—if it’s done well. You don’t have to agree with me but I think Yamaha kept things too conservative with the XSRs. Something along the lines of the Capêlo and Santos custom, with a little late 80s trail flare, however, would look really good on that showroom floor.

Of course, right now, that’s all theoretical and Yamaha hasn’t hinted at a vintage off-roader in any shape or form (sadly). At least for now. Now it’s your turn to tell me what you think about the idea of an XSR-based scrambler?