Royal Enfield Arms A 650 Twin For The Flat Track 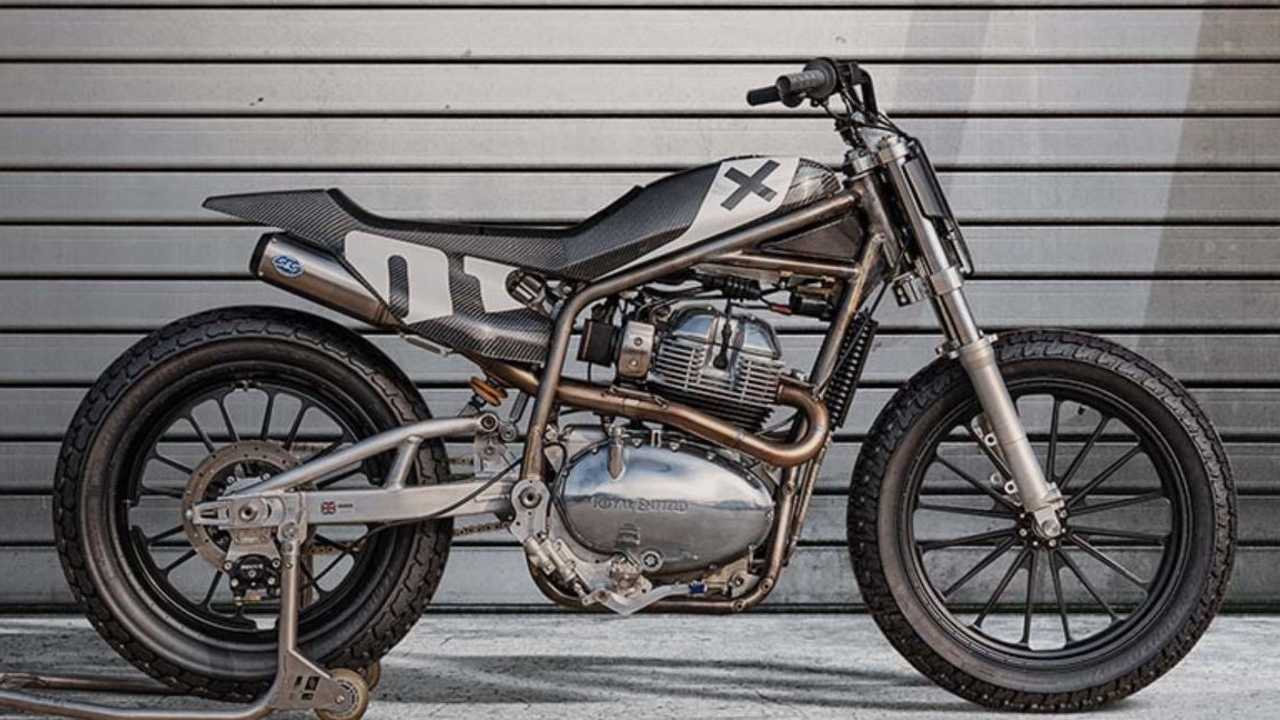 Flat-track racing has enjoyed a boom in viewership over the past few years. The growing popularity of the sport even prompted Indian Motorcycles to release a production version of the series-dominating FTR750. Similar to the FTR750’s success on the track, the street-legal FTR1200 propelled Indian’s impressive earnings figures in 2019. With the flat-track craze sweeping the industry, Royal Enfield turned a 650 Twin into a flat-tracker for EICMA 2019.

Flat Track From The Factory:

Partnering with its UK subsidiary Harris Performance, Royal Enfield wanted to illustrate the flexibility of the 650 Twin platform while retaining the “simple riding fun” of the model. While Harris is known for its 40 years of chassis expertise, the custom build was their first attempt at a flat-track frame.

Starting with just the motor and transmission, the team cradled the 648cc parallel-twin in a frame of brazed steel tubing. Harris Performance ditched the dual shock set up of the stock 650 Twins for a modern swingarm with monoshock suspension. In the front, the team equipped the flat-tracker with custom front forks to handle the bar banging turns of the circuit. Atop the sculpture of steel, the builders applied all carbon fiber bodywork that integrated the tank and tail sections of the bike.

To help flat-track build drive out of the corners, Harris bolted on an S&S big bore kit and twin pipes. A set of Dunlop racing tires spooned onto RSD rims helped the team achieve the flat-track stance. Finishing touches like the upgraded Brembo caliper in the rear and minimal graphics completed the build.

Those that race know it’s an expensive endeavor. From motor mods to suspension upgrades to the inevitable crash, racers are aware of the price of competing. With that in mind, many amateur track rats opt for an affordable bike with an extensive parts catalog. That’s the reason the Harley-Davidson Sportster is so popular in hooligan racing circles and that’s the reason Royal Enfield could flourish in this space.

If more parts are developed and made available, the low MSRP of Royal Enfields may be a great entry point for a flat-track build. While most buyers won’t be fabricating the chassis themselves, a lightly-modified Interceptor 650 or GT 650 can easily qualify for a Run What You Brung race. In the future, the 650 Twin platform could make racing and riding more accessible and that’s all Royal Enfield is about.