Mutt Adds A Rover To The Kennel With The GT-SS 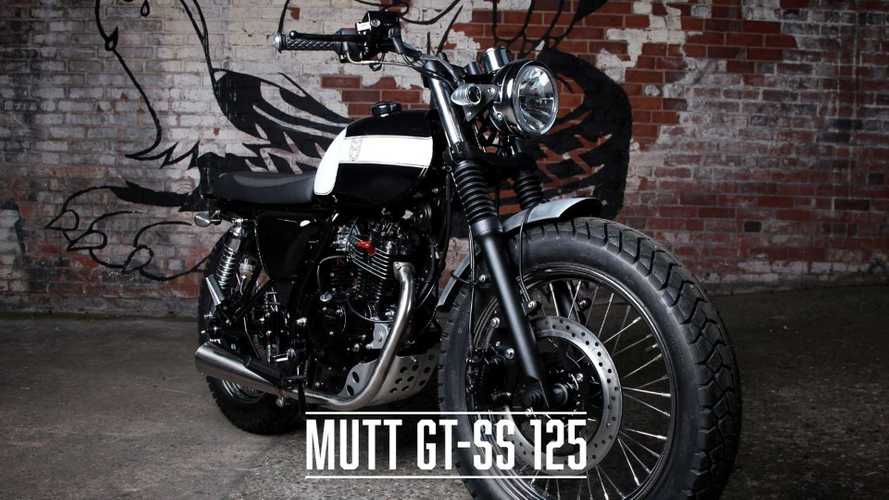 UK-based Mutt Motorcycles specializes in small-displacement motorcycles. Offering models in 125cc and 250cc variants, the company pays homage to its Birmingham roots with designs inspired by BSA and New Imperial. Though the Mutt moniker is decidedly adorable, the brand’s aesthetic is thoroughbred ‘60s scrambler. We at RA consider Mutt’s lineup some of the best in show, but we can’t say they’d be our first pick for a long road trip. With the introduction of the GT-SS, Mutt Motorcycles is adding a grand tourer to its lineup and broadening the appeal of the brand.

Most of Mutt’s models are meant for a putt around town or breaking loose in a patch of dirt so the designers had to approach the GT-SS differently. To better equip the grand tourer for the long haul, the team increased fuel capacity with a 4.9-gallon petrol tank. While most of Birmingham’s best utilize a 3.1-gallon tank, imbuing the motorcycles a sleek silhouette, the larger tank on the GT-SS retained all the styling cues synonymous with the brand.

Increasing the endurance of the bike from a terrier to a malamute also meant that the company had to improve the ride comfort. Mutt’s team bestowed the Grand Tour Super Single with a hand-contoured soft leather seat to help with those pavement-pounding runs. Exclusive to the model, the designers forewent diamond stitching or pleating for this bench seat and opted for a more utilitarian look.

On top of the added stamina and comfort, Mutt decided to offer the GT-SS in two configurations. They featured knobbies on the Tracker version for those looking to explore the unbeaten path and smooth tires meant for the tarmac on the Roadster edition.

Of course, Mutt’s stellar fit and finish come standard. From the glossy side panels to the brushed aluminum fenders, the designers ensured that owners will be traveling in style. Even bits like the machined LED indicators and satin black fork lowers received the utmost attention from the team.

Unfortunately for us Yanks, Mutts aren’t available in the States yet. However, Mutt Motorcycles North America is launching and the company's tiny, mighty bikes will be on America's (and Canada's) streets by February 2020. Stay tuned for more details!

They said it couldn’t be done, but Mutt has managed to send its rip-roaring, road chewing bikes kicking and screaming through a finishing school and have come out the other end with a mile-munching beast that can ride with the grandest of the grand tourers. You may be thinking no-one takes a small cc bike on tour, you would be wrong. Mutt Motorcycles have been ripped through the countryside to the city, from Morroco to Leeds (more on that here) from London to across Europe, so yeah, they’ve been about.

The GT-SS is built for the long ride into the sunset, newly equipped with the tools it needs to go the extra mile...and the rest. Starting with the larger 17-litre tank which has been specifically designed to have the capacity, but also the style to kick it with the other Mutts in the kennel. All the way down to the gloss side panels and the hand contoured soft leather seat, exclusive to this model, this is one of the most stylish bikes the Birmingham masters have dropped so far. The neat little details that Mutts are renowned for are present and accounted for as well the GT-SS has got super cool machined LED indicators, CNC machined headlight brackets, satin-finished aluminium fork caps and head stem nut and sharp as you like black anodised handlebar clamps. To top it all off the GT-SS is available in with either big knobbly mud churning tyres in the Tracker model or with white line riding smooth road tyres on the Roadster model.

Mutt Motorcycles have expanded into Japan, sold out 2018’s range completely, collaborated on secret projects with some the biggest stars in the world and moving soon into new territories across the world. This is without even mentioning the list of current Mutt owners which includes; Tom Hardy (Actor), Reggie Yates (Entertainer / Documentarian), James May (The Grand Tour/Presenter), Skin (Musician/Skunk Anansie), Ben Ransom (Rugby), Iwan Thomas (Athlete), Rob Halliday (Musician/The Prodigy) and Lee Malia (Musician/Bring Me The Horizon).