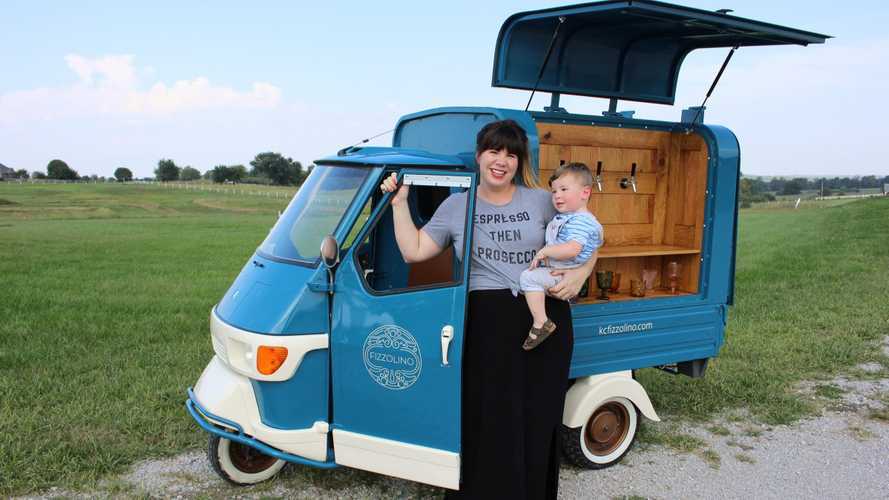 When you need the bubbly right now.

It’s very fitting that my first story for RideApart features my hometown, Kansas City, and an obscure vehicle: the Piaggio Ape. Normally, we tend to not talk about the Ape as it’s more of a three-wheeled truck than it is a trike. This one gets an exception, though, thanks of the wonders of alcohol. See, a Kansas City couple turned the humble Piaggo Ape into a mobile wine bar and it's just about the best thing ever.

Katie Currid and her husband Tyler Jackson fell in love with the tiny truck (and wine) while living in Italy, and thus a magic idea was born. Every event can use a little livening up, so adding a little booze catered by the vehicular equivalent of a pug is just what the world needs. The Ape makes perfect sense on the crowded streets of Florence, Italy, where it has to wiggle its way down streets designed when the cart was a new-fangled invention. Which makes putting it in the midst of the Midwest—in a sea of lifted, coal rolling brodozers—just the perfect kind of insanity.

Currid and Jackson’s company, Fizzolino, is a traveling bartending service built right into the back of the Ape. They run three separate taps, so they can carry a variety of different adult beverages, depending on the event or season.

"We fill it with sangria a lot," Currid told KCUR. "We're doing like apple cider now because it's getting into fall. We can do like a flavored lemonade, and we do a lot of local beer, like Boulevard Wheat or KC Dunkel."

Currid always reserves one tap for prosecco, though. Prosecco is a fizzy, relatively sweet wine from Italy's Valdobbiadene region. Served chilled, Italians drink prosecco before, during, and after meals. It's refreshing, easy drinking, and goes with just about anything.

For those of you who don’t know, the Ape—Italian for bee—is what you’d get if you crossed a Vespa with a Ford Ranger. One wheel in the front, two in the back, and (up to) 435ccs worth of party in the middle. The old girl isn’t the fastest thing on the block, but she’ll get the job done. Overseas they’re used as every type of commercial vehicle imaginable, from food trucks and mail trucks to delivery vans.

This little thing is so cute it makes my teeth hurt.