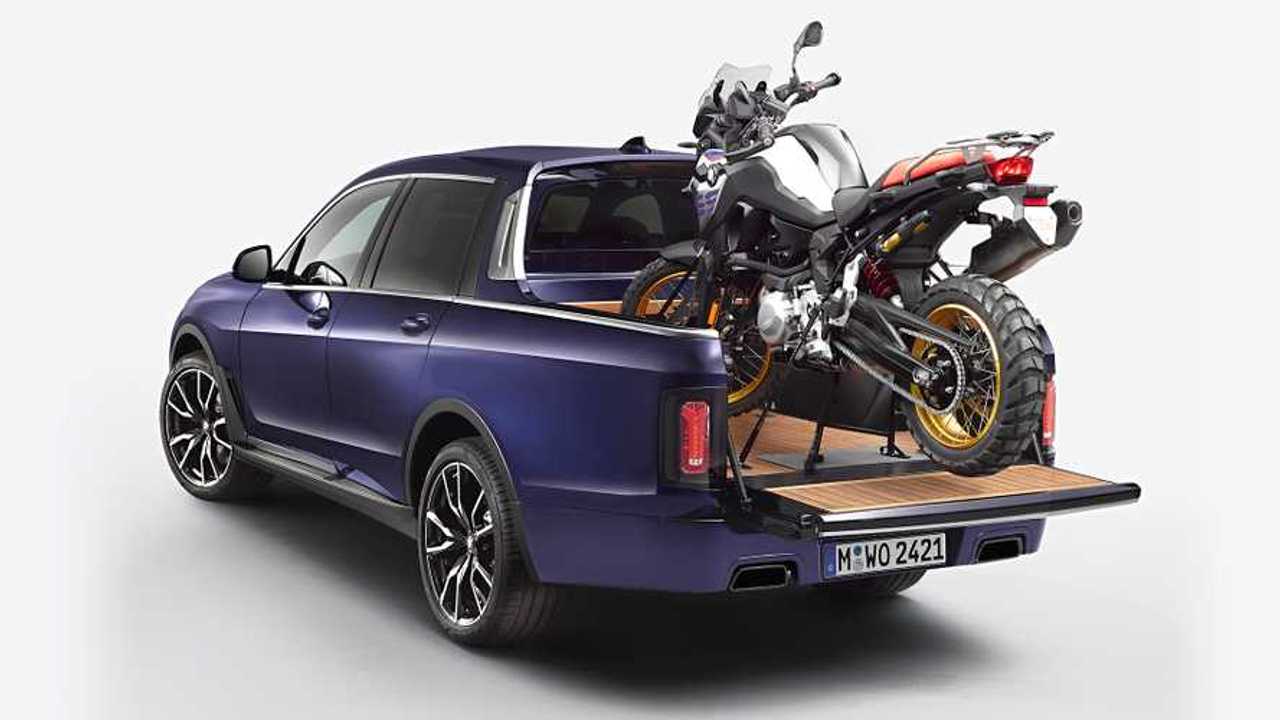 The BMW X7 Pickup Concept can transport an F 850 GS, but there are better ways to do it.

On Friday, BMW took the wraps off a concept debuting at BMW Motorrad Days—but it's not a motorcycle. It's a pickup truck version of the X7 SUV shown transporting a motorcycle.

BMW Group vocational trainees, in cooperation with the Concept Vehicle Construction and Model Technology divisions at the BMW Munich plant, performed the crop-top conversion. They extended the rear cargo area by four inches to make it 55 inches long with the tailgate shut or 79 inches with it open, then finished it off with teak and an F 850 GS to show how rugged the X7 truck is.

The thing is, a top-of-the-line luxury SUV does not mix well with the dirt and mud your GS will be covered in if you're riding it properly. While I can appreciate a company that makes both cars and motorcycles promoting them by cross-pollination, an X7 pickup would be even more useless for this task than the Lincoln F-150... I mean, Mark LT. That teak bed will get scratched, dinged, and pounded into oblivion from loading and unloading your bike. The problem with any quad cab pickup is the resulting short bed. This is bad enough in a vehicle designed from the ground up to be a truck, but it's even worse in the X7 pickup, which was never meant to haul anything more than groceries in the back. The F 850 GS is not a large bike, but it still has to turn its handlebars to fit in the bed with the tailgate down.

I see what BMW is trying to do here, but we didn't see that with Honda and the Ridgeline, which is essentially a chopped Pilot SUV that Honda tries very, very hard to convince us is a real pickup truck. Ironically, I'd have no trouble at all believing that a Ridgeline could haul a CRF250L to the trails. At least it wouldn't damage the fine teak in the process.

If you want a solid German car/truck to haul your bike, do what I did. Start with a cheap old VW Jetta. Then buy a Smyth Performance ute kit. Chop it and build it yourself to your exact specifications. I reused the rear door latches as front tie-down hooks, bolted through the front of the thick aluminum bed. This combination is easily strong enough to secure a dirt bike in the back. The aluminum floor of the bed is strong enough to support the bike without sagging, and won't be nearly as fragile as the BMW's teak. The converted Jetta will give you a 68.5-inch long bed, and with the tailgate open you can accommodate even longer bikes. It's lower to the ground for easier loading and unloading. Go with the 1.8T engine like I did and it'll still zip right along while getting 30 mpg. Splurge for a TDI and watch your mileage go through (what's left of) the roof. It's cheaper to buy, cheaper to run, and even in unfinished black primer, it'll turn heads everywhere you go.