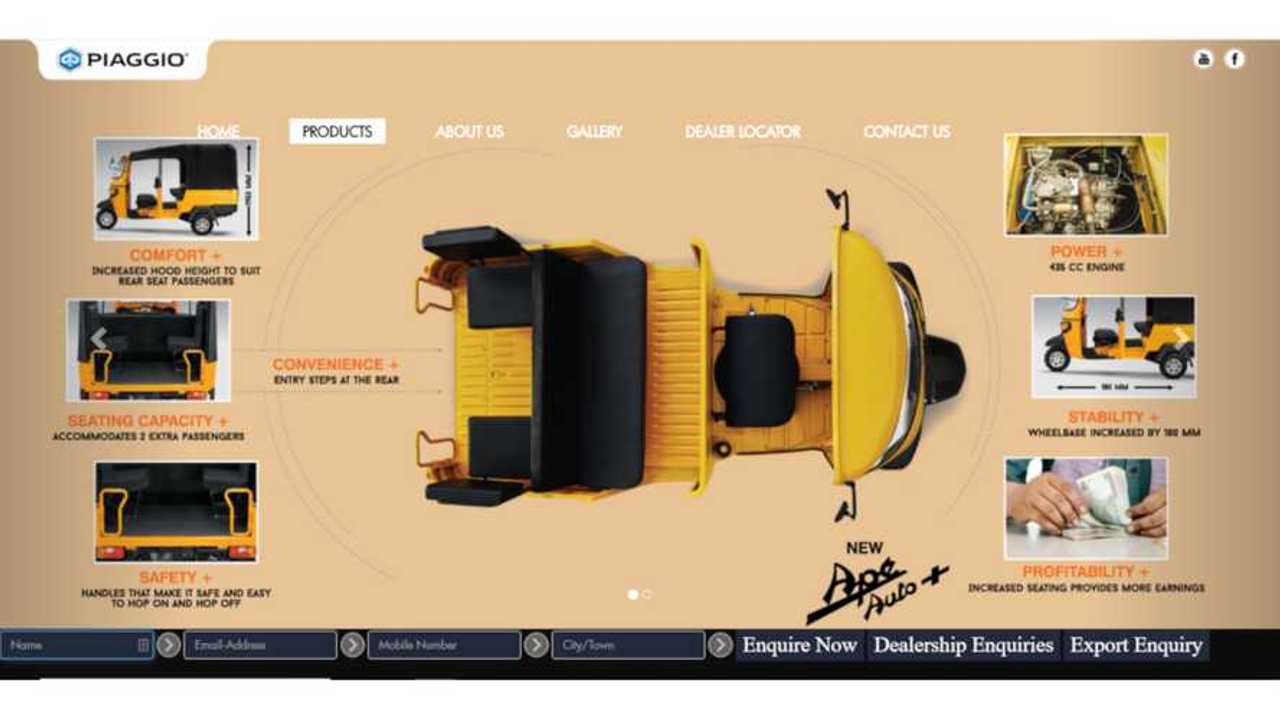 India's second-largest three-wheeler manufacturer is charged up to fight.

While Piaggio may only be eighth in India’s two-wheeled market according to FY2019 sales figures, it’s worth noting that India’s three-wheeler market is actually enormous—and it’s only continuing to grow. In the 2018 calendar year, the Economic Times reported that three-wheeler sales totalled 717,590 over CY2017’s 548,026—and in that segment, Piaggio is currently ranked second in overall sales.

It's All Happening In India:

Since the government of India’s proposed three-wheeler EV regulations would be first to go into effect in 2023, the fact that Piaggio is now saying it’s too much too soon may make a difference to how quickly the government moves forward. Currently, only Bajaj ranks higher in three-wheeler sales, with the total number sold in CY2018 at 419,246 to Piaggio’s 167,362. Meanwhile, third-place Mahindra sold 64,506 three-wheelers in the same time period.

"We have lined up investments worth more than Rs 300 crore [or $42,952,500 USD] in the next three years to reinforce and expand our penetration in the three-wheeler space in India,” Dr. Diego Graffi, CEO of Piaggio Vehicles, told CNBC-TV18. “We still have a huge space for growth here.”

The Vespa Elettrica is planned for a launch in India in 2019.

“Out of the Rs 300 crore, only a small part so far has been dedicated to electric vehicles because this plan had been validated more than two years ago, when hardly anybody was talking about electric mobility in India,” Dr. Graffi continued. “However, it is not only a matter of producing electric vehicles but also about creating infrastructure and the ecosystem to make these vehicles operational.”

It’s worth remembering that to date, no official law has gone into effect in India—and some anonymous government sources recently told CNBC-TV18 that “no decision has been made” about that proposal at this time. However, the mere implication of such an impending proposal has had the industry on full alert.

The Piaggio Wi-Bike is available elsewhere, but not currently sold in India.

Honda India—which is currently second in two-wheeler sales—has already voiced its concern. Hero MotorCorp—which is currently first in two-wheeler sales—has spoken out against moving too fast, as has Bajaj and TVS. Only Mahindra’s Mahesh Babu feels that the 2023 deadline for three-wheelers is positive. That may also be the case because Mahindra and Tata are also the only two auto manufacturers currently making EVs in India at this time. While Piaggio might be manufacturing EVs elsewhere, the Pontedera-based company has yet to start doing so in India.

Despite Voicing These Concerns, Piaggio Is Moving Ahead With EV Introduction in India Fairly Soon

According to Business Standard, Piaggio plans to unveil its very first electric three-wheeler in India by December 2019. Dr. Graffi told that publication that pilot production of that vehicle will start no later than September 2019. The company just launched the Ape City+ three-wheeler in four fuel options two weeks ago: LPG, CNG, petrol, and diesel. Interestingly, Dr. Graffi said that the intended cost of the electric three-wheeler should be in line with the current Ape City+ range of Rs. 1.45 lakh to Rs 1.95 lakh (or $2,076 to $2,791.52 USD). When asked how this could be the case, Dr. Graffi said, “This is because the cost of the battery is not involved as we will be offering swappable battery service in association with Sun Mobility.”

Besides scrambling to build appropriate EV infrastructure to support such a rapid shift throughout India, that’s the main issue—battery development and manufacture for most manufacturers.

“As far as the industry readiness is concerned, there are companies that have been into electric mobility for the past 10 years. The high cost of batteries is a problem,” director of corporate affairs for the Society of Manufacturers of Electric Vehicles, Manu Sharma, told CNBC-TV18. “The battery is being imported as nobody is manufacturing it in India.”

Sharma continued, “One of the major components of Faster Adoption and Manufacturing of (Hybrid and) Electric Vehicles (FAME 1) scheme was to support the supply side for making batteries. Somehow that did not trigger off as it should have. As soon as the battery cost comes down, every electric vehicle actually is very cost effective.”