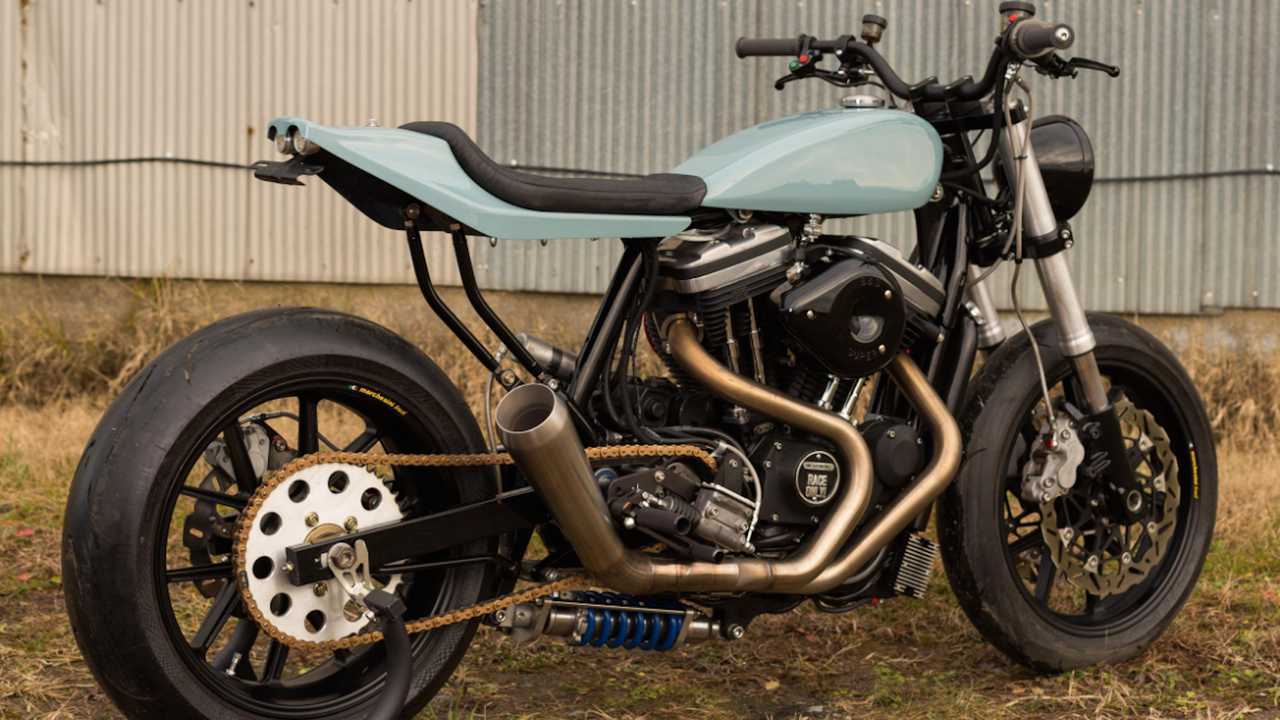 Turning the Sportster into the "XG1200R".

With the release of Indian’s new FTR1200, riders finally have the option of purchasing a production street tracker. Those partial to the Orange and Black, however, still lack the luxury of purchasing an out-of-the-crate, road-legal tracker, forcing them to either give up or seek out other, more hands-on alternatives. The latter is the path that builder Kevin Dunworth recently opted to take, transforming a Sportster 1200 into a dirt oval racer-inspired street tracker.

This Super Hooligan Bonneville Is The Flat Tracker We All Want
⠀

Watch This KTM 300 EXC Turn Into A Mini Flat Tracker

Until fairly recently, Dunworth operated under the banner of Loaded Gun Customs; a reputable Delaware-based outfit well-known on the customs scene. The shop’s work was featured in a plethora of magazines, covered by the likes of Complex, Silodrome, BikeExif, R.O.T.C.R., HotBikeWeb, CyrilHuzeBlog, and has appeared on the Discovery Channel’s Naked Speed, Esquire’s Wrench Against the Machine, and multiple seasons of Velocity Channel’s Café Racer TV.

As more than a mere style exercise, Dunworth wanted the tracked-out Sportster to be a performer. So, he rang up S&S, explained his project, and got hold of a substantially more potent engine, ensuring the power would for sure be there. Next, he began chopping up the Sportster’s stock frame, making a number of pretty major modifications to the structural work. Dunworth also cooked up a one-off Chromoly swing-arm connected via an underslung mount by way of a Race-Tech monoshock. This layout is similar to the setups on old Buells. The build’s new USD forks, which required ample custom work to graft onto the Harley, were plucked off Kawasaki’s ZX7R before being stuffed with new Race-Tech internals.

A new hooped subframe now supports a fiberglass tracker tail from Saddlemen, capped off with a custom-stitched seat pad. All the ancillaries under the tail were tidied up, relocated, or deleted, resulting in an incredibly clean and clutter-free area beneath the seat. This gives the build a more modern look while further drawing one’s eyes to the beefy street tire out back. Finishing out the rear end is a pair of side-by-side circular taillights sunken into the back of the bike, not unlike the taillights on the early GSX-Rs. Meanwhile, out front, in place of the traditional tracker-style number plate, Dunworth opted for a classic round headlight.

Just like Indian’s FTR1200, this H-D 1200, (or “XG1200R” if you will), is markedly sportier than any other existing machine coming out of the Milwaukee-brand factories right now. And you may see more of this build in the near future too, as Bell Helmets photographed this tracker recently to use in some of its upcoming marketing materials. Now, if we could only get Harley to build something half-this-deft, then we'd be cooking with gas.

6 Photos
Photo by: RideApart.com
++
Got a tip for us? Email: tips@rideapart.com