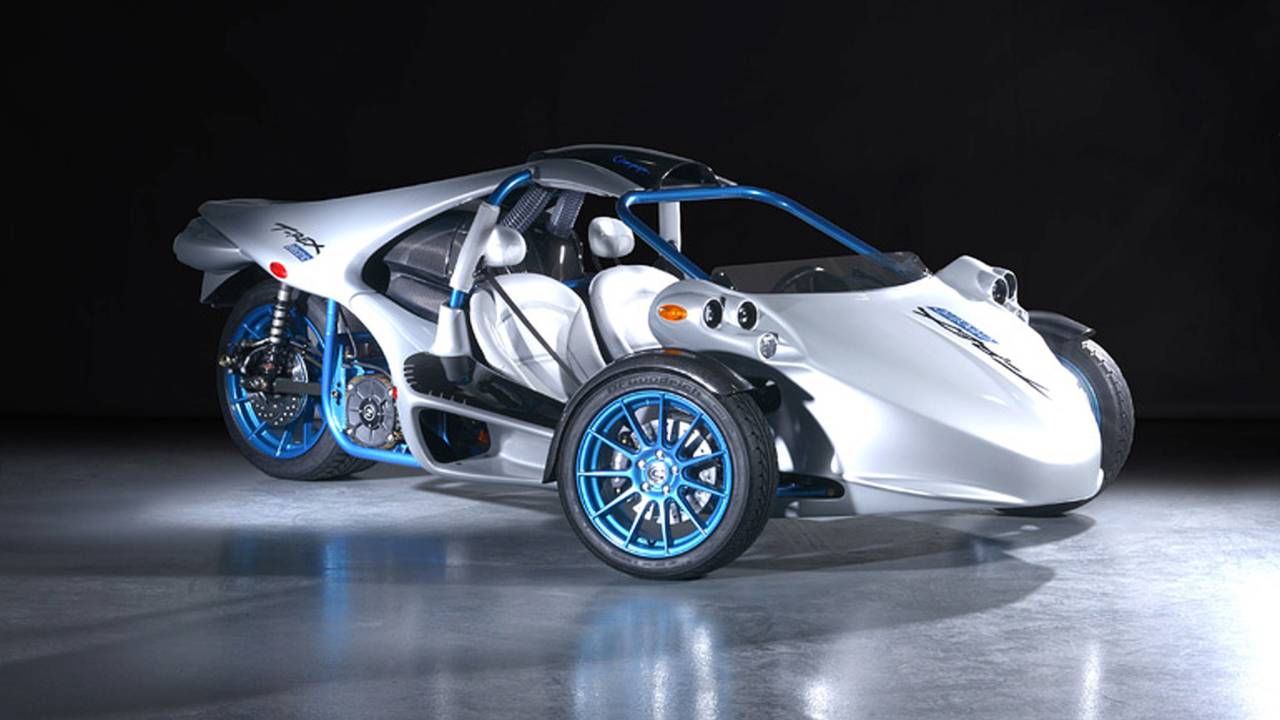 Just nine months ago, we brought you news of the pivot to electric power by Campagna Motors with our story on the T-Rex Electric, built with help from Zero. Now it seems that trike, and the rest of the T-Rex line, are in limbo as the company assets have been seized by the company's creditors and company president Andre Morissette has been forced to step down. With a new crop of car-like reverse trikes from Polaris and Vanderhal, both of which seriously undercut the T-Rex's MSRP, it is understandable that a bank would question their business model.

We have reluctantly covered these three wheeled sports cars in the past even though they aren't really motorcycles, mostly because we thought they were neat, and they used motorcycle engines. One of these days we will create an official continuum or matrix of motorcycles/trikes/ATVs/cars, but I think even with motorcycle engine and sequential gearbox, a reverse trike that you sit down in is officially a three wheeled car. That being said, the T-Rex, along with the Polaris Slingshot, manages to gain lightness and fun by shedding a wheel and with it all the safety rules a car must conform to.

Campagna had been building some sort of three wheeled car since 1995, with power from various bike motors, the BMW 1600cc six cylinders, or Harley-Davidson twin most recently. They were known as a fun if expensive way to shred some canyons, with an MSRP of $50,000 or $60,000 depending on model, and power to weight rations that rivaled Porsche 911. Compared to the Slingshot at $21,000 and the Vanderhall at $27,000, it isn't hard to see the T-Rex was headed for extinction; a V8 powered Corvette starts at just $55,900.

"To all our customers, dealers, fans and friends out there.

Today marks the end of Campagna Motors as we know it.

Because we were not able to secure the appropriate funding to secure our proposal to creditors accepted this last November, the bank decided to secure its position and took ownership of our assets today.

It will have been a pleasure and an honor to work with you, to serve you and to spend the last 15 years of my life in this amazing adventure. It ends here and now for me unfortunately. I will be moving on in my life but from what I know today, I am hopefull that the next owners of this venture will continue to innovate and create the exceptionnal product that we have been making since 1988.

To the future adventurers that will take the leadership in the future I whish you the best of luck. I was always very proud of our vehicles that represent so well the real nature of Quebec and Quebecers: audacious, unique, different and creative out of the box stuff.

Farewell my friends and long live our products.