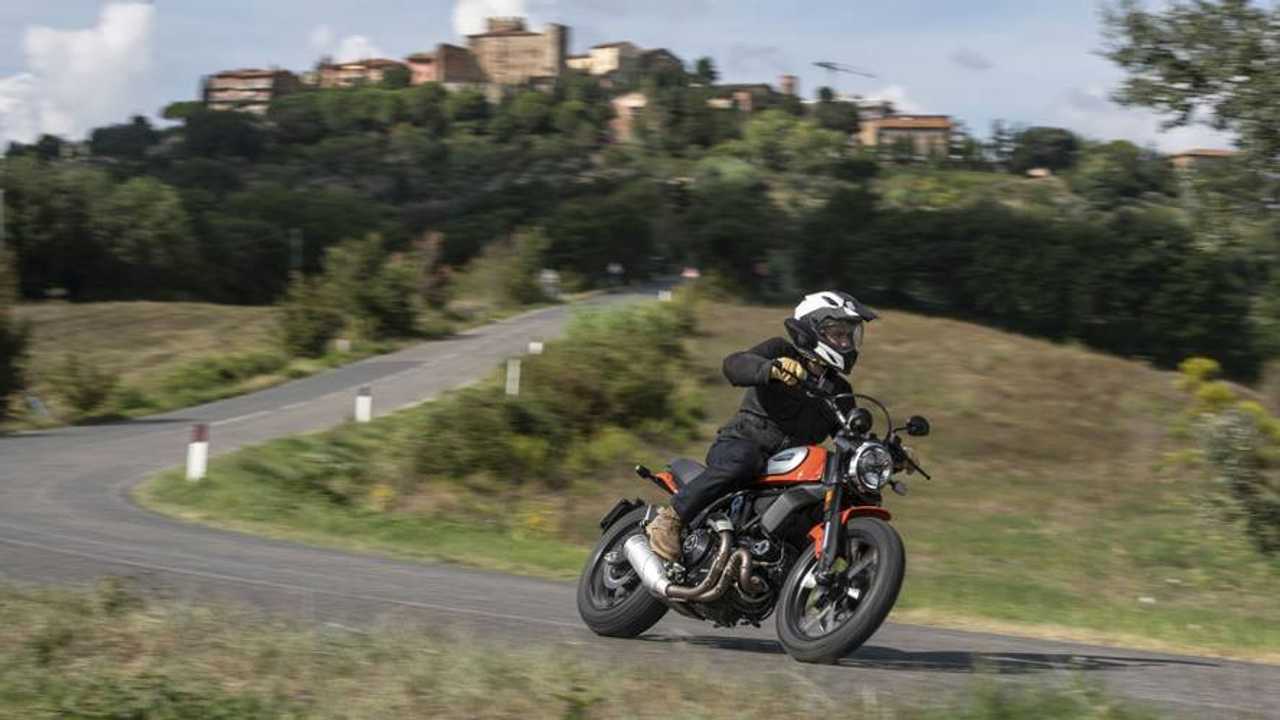 I’d been to Tuscany before. In 2008 with my father and now ex-wife. We traveled by train from Florence, we drank wine and ate bread, and wandered about the small towns that speckle the landscape. We were limited, though, in our ability to see the countryside, to experience Tuscany the way you might imagine—swilling small glasses of grape drink and commenting on the nose and legs of a particular varietal, or whatever. We enjoyed our time, however, and agreed to go back. Like so many things in life though, an intention to return is often outweighed by other opportunities, other places. So, every time I have traveled to Italy since I’ve skipped over this area, choosing instead to spend weeks in Verona, or along the southeastern shore in Brindisi, and maybe one too many nights in its sweaty, tourist-clogged capital of Rome. So, when Ducati invited me to Tuscany to test ride the Scrambler Icon, I jumped at the opportunity to see this bit of Italy again, and perhaps more thoroughly.

Traveling to Tuscany this time around required a flight from Kona, Hawaii—where I had been working on a video project with Western Aloha—to San Francisco, California. From there on to Munich, before finally arriving in Florence some 4,000 hours later. It was an exhausting endeavor, albeit book-ended by two beautiful places, and an experience I could not pass up. My arrival in Bologna was late, and by the time I got to the hotel, I had an hour to get my shit together before I needed to be downstairs for dinner. We stayed two nights in Bologna, taking a day to visit the Ducati factory. To most, this is a once-in-a-lifetime opportunity, and I’m fortunate enough to say I’ve seen it twice.

Like anything you get to take a better look at, the factory and its inner workings are a marvel to anyone that loves motorcycles. The factory was rebuilt after being bombed during WWII, and the company subsequently transitioned from producing radios and electric razors to manufacturing small two-cycle engines which the struggling post-war population could attach to their bicycles as a means of cheap and efficient transportation. And thus, Ducati became a motorcycle manufacturer. Our factory trip culminated with a tour of their museum, housing a collection of motorbikes from their humble beginning through their most recent Grand Prix entries.

A late-night screening of Ducati’s latest promotional film ended our evening in Bologna, and the next morning we traveled by bus to Borgo San Luigi, a 73-room estate in Siena, at the heart of the Tuscan countryside.

The surrounding landscape can be overwhelmingly beautiful at times. Like a scene cut from a romantic comedy, where the girl escapes to Italy and falls in love with the roughneck winemaker. Rolling green hills are not cliché in Tuscany, they’re everywhere and serve as a border to row after row of grape varietals grown in long lines across the surroundings. Our estate, what was rumored to be an old village, played the perfect host to our test ride. We ate hamburgers by the pool, played giant games of Jenga and then, before any of us were ready, awoke to the sun for our spree through the Tuscan terrain.

If you’ve never ridden a Scrambler, you should. I’ve argued they’re the perfect choice for the guy or gal who can afford to own only one motorcycle. Comfortable at highway speeds, nimble on narrow streets, can carry a passenger and luggage, but is also more than happy ripping down a dirt road at speed. No, you’re not going to win an enduro race with the damn thing, but you certainly won’t need to stop when the pavement does. And to me, that’s the best part of riding motorcycles. They can lead you down roads you might otherwise miss if you were at the wheel of a fuel-efficient four-door sedan; they inspire you to explore, especially when their abilities outweigh yours; and so, the Scrambler, albeit lightly updated from last year’s iteration (a new LED headlight, cornering ABS and a new colorway), is maybe the perfect motorcycle… If you’re allotted only one motorcycle, of course.

We rode two separate loops, one to the north, which included a bit of elevation gain, and a handful of switchbacks with plenty of quiet little towns to rumble through. The second loop took us south through the country, carrying a bit brisker pace, thankfully. The Scrambler Icon, in standard trim, produces 73 horsepower from a carryover 803-cc oil-cooled L-Twin engine mated to a six-speed manual transmission. Which is plenty. It carries 3.5 gallons of petrol – also enough – considering it averages 46 miles-per-gallon. We stopped for fuel midday, ate lunch back at the Borgo, and then circled the proverbial wagons for a ride down a few dirt roads. This bit, albeit brief, proved to me that the Scrambler is more than enough motorcycle. For the guy or gal who transports themselves to work during the week, then jaunts out of town on the weekends. Or, when the bug finally bites, and they load it up with sufficient kit to keep them on the road for ten, maybe twenty days. And when the tarmac calls it quits and the road turns to rubble, the Scrambler will keep on, long after you’re ready to go home.

Like a lot of choices, there isn’t only a “right” or a “wrong” one. There’s just the one you made, and if you’re making one which involves a motorcycle, and you don’t have room for the ten—or twenty—that we all want, the Scrambler isn’t such a bad idea.

This trip to Tuscany was considerably different than my previous one. There was no future ex-wife, no tourist traps, no train rides. Instead, I spent a few days with some damn fine friends riding what we all would agree is a great motorcycle in one of the most beautiful places on the planet. It’s easy to get all glassy-eyed about this, to glaze over the facts and info in favor of feelings, but in this case, it was about good times. And we had them, thanks mostly to motorcycles, and also because Bendall wore a hip wallet thing (winky face).