Riders and their income are up

"In 2003, Baby Boomer riders outnumbered Gen Y motorcyclists almost four to one. But Gen Y motorcycle ownership grew 62 percent since 2003, putting the current ratio of Baby Boomers to Gen Y at two to one. Bikes that look like they came from the 1950s are giving way to bikes that are futuristic among young buyers." The final results of the 2008 Motorcycle Industry Council Owner Survey have just come in and its interpretation of the data indicates that more young people and women are riding, while overall the numbers of riders are up, as is their income.

This should turn out to be a watershed moment for the motorcycle industry. As the Financiapocalypse dries up the traditional Boomer source of purchasing power -- home equity loans -- the industry is going to increasingly rely on younger people purchasing motorcycles for transportation. Some of the trends identified in the survey -- the generational shift, the increase in women riders, the move away from cruisers, increased acceptance in mainstream society -- are likely to be made stronger by the new economy, while others -- increased rider wealth, the growing percentage of bikers owning new motorcycles -- could trend sharply downwards. 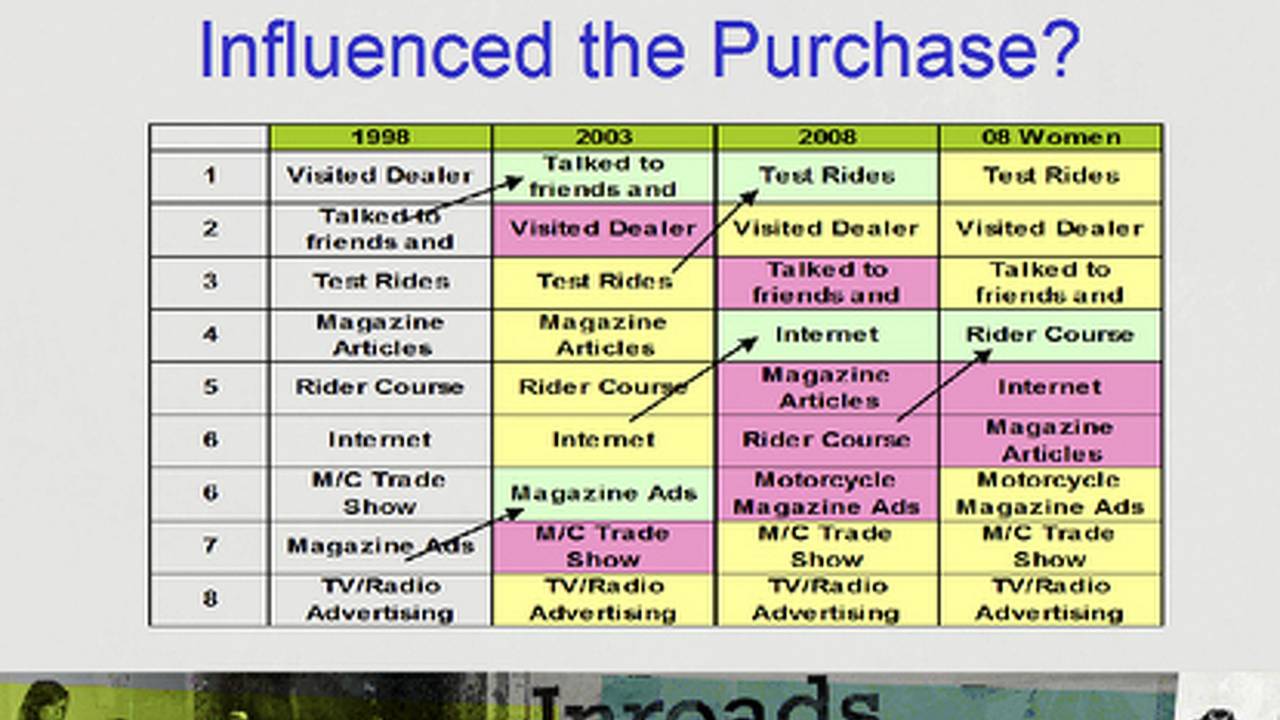 It'll be interesting to see how the industry responds to this new data. Some companies are likely to stick their heads in the sand and continue to push lame cruisers and overwrought choppers, while smaller companies are already reaching new audiences through technological innovation. Which approach do you think is going to work best?

Motorcycling is growing and rapidly becoming more mainstream at the start of the new millennium, says the latest census of two-wheeling. The number of American households that own motorcycles jumped 26 percent from 2003 to 2008, while the overall number of U.S. households increased roughly 5 percent. During the same period, the motorcycle population grew 19 percent while the U.S. population rose by about 5 percent.

These are some of the findings of the latest Motorcycle Industry Council Owner Survey, the powersport industry's most comprehensive resource for information on U.S. motorcycle ownership, usage, demographics and trends. Motorcycling is changing with the times and along with millions more riders there are increasing percentages of women and youth and a shift toward riding to get around, not just to have fun.

"Motorcycling is playing a bigger role in our fast-changing world and many of the trends we were hoping to see some twenty years ago have become reality," said MIC President Tim Buche. "Household penetration over the past five years has increased by 1,516,610 individuals or 20%. As an activity, a form of transportation or a lifestyle, motorcycling still has tremendous room for growth, but two-wheeling has made significant inroads among various key demographics and is a larger part of American culture than ever."

Key findings of the new Motorcycle/ATV Owner Survey include:

1. Motorcycles are More Mainstream. Since 2003, the number of motorcycles owned and used in America grew 19 percent to approximately 10.4 million. Continuing a trend, that was a 58 percent increase since 1998, estimated then at 6.6 million. To imagine motorcycling today, picture a population greater than that of New York City (the residents of Moscow, Seoul or the entire state of Michigan) all on two wheels. An estimated 25 million people swung a leg over a bike and rode last year. That's a 7 percent increase, from 2003, in the number of Americans who ride but may or may not own motorcycles.

2. You go, girl! Female ownership of motorcycles crossed the 10-percent mark, increasing from 9.6 percent in 2003 up to 12.3 percent in 2008. Younger generations have even more female riders. Some 15 percent of Gen X motorcycle owners are women, and for Gen Y, it's 14 percent. Among Gen Xers, women more than doubled their presence since 1998. Maybe most impressive, women accounted for 23 percent, or 5.7 million, of the 25 million Americans who rode a motorcycle last year. It's not just a guy thing anymore, and greater acceptance among women means greater acceptance among key influencers of household spending decisions.

3. A New Generation is Riding. In 2003, Baby Boomer riders outnumbered Gen Y motorcyclists almost four to one. But Gen Y motorcycle ownership grew 62 percent since 2003, putting the current ratio of Baby Boomers to Gen Y at two to one. While 50 may be the new 30, the industry recognizes the importance of engaging younger customers as long-time riders begin to age out of motorcycling.

4. Motorcyclists Make More Money. While owning a motorcycle is much more affordable in many ways compared to having a car, the median household income of motorcycle owners exceeds that of the average American. Two-wheel households average $59,290 while the U.S. average is $50,233.

5. Motorcyclists Have More New Bikes. Along with the general rise in motorcycle interest over the past five years, demand for the latest and greatest bikes increased. Of all motorcycles in use in 2008, 46 percent were purchased new, up 7 percent since 2003. The average age of motorcycles is dropping as new styles and designs attract younger customers. Each year for the past six years, sales of new motorcycles and scooters topped one million units. That's a record run for seven-figure sales numbers.

6. Sport Bikes Rule With Gen Y. Half of boomer motorcyclists surveyed ride traditional cruisers. But among Gen Y motorcyclists, modern, high-tech sport bikes lead the way with 30 percent of those riders. Bikes that look like they came from the 1950s are giving way to bikes that are futuristic among young buyers.

7. Riders are Doing it for Transportation Not Just Recreation. Motorcycling for Americans has primarily been about recreation and the pure joy of riding. But among the reasons given for motorcycling, transportation climbed to second place in the 2008 survey, now ahead of shortdistance touring. It may be due to fuel prices, environmental concerns, convenience, or a combination of reasons.

8. Experience Counts. Test rides moved to the top spot as the most important factor in the decision to buy a particular motorcycle. Dealership visits, advice from family and friends, magazine editorial and product reviews and the Internet are also important influencers. Experiencing the ride is now more important than traditional marketing tools such as magazine advertising, radio and TV and trade shows.

9. Touring and Sport Riders Spend the Most. Compared to other motorcyclists last year, touring owners spent significantly more on aftermarket purchases, including tires, repairs and maintenance, and replacement parts and accessories - an average of $620 per year. Demonstrating a strong interest in gear, sport bike riders spent more on apparel than any other segment - an average of $578 per year.

"The 2008 survey reveals that motorcycling is continuing to become more mainstream in America," Buche said. "Back in 1992, right as motorcycling started trending upward, Americans only bought 278,000 new bikes. Times have changed, we've sold more than a million each year for the past six, and two-wheeling may have a bigger role in the future of American mobility than we can imagine."

The Owner Survey, which is among the MIC's most popular membership benefits, is provided at no charge to member companies: manufacturers and distributors of motorcycles, scooters, motorcycle/ATV/ROV parts and accessories, and members of allied trades such as publishing companies, advertising agencies, insurance firms and consultants. The MIC will issue news releases, special reports and participate in media interviews using information from the report throughout the year.

"The survey gives us great information, improves our understanding and helps sharpen the focus of our approach to the market," Buche said. "It identifies significant trends as well as owner profiles and buying patterns. This is information our member companies can utilize to fine-tune their business plans."

Data in the 2008 MIC Motorcycle/ATV Owner Survey Summary Report is based solely on responses from owners, riders and non-owners who responded via an online national panel. The panel was balanced to represent all U.S. households in age, income, ethnicity, geography, household and market size to ensure that the data are statistically sound and projectable.

The target sample size for owner/riders was 2,000 and 1,500 for non-owners. For households that own more than one vehicle, a random selection was used to select an individual vehicle for detailed questioning. Ideally, the primary rider was interviewed.