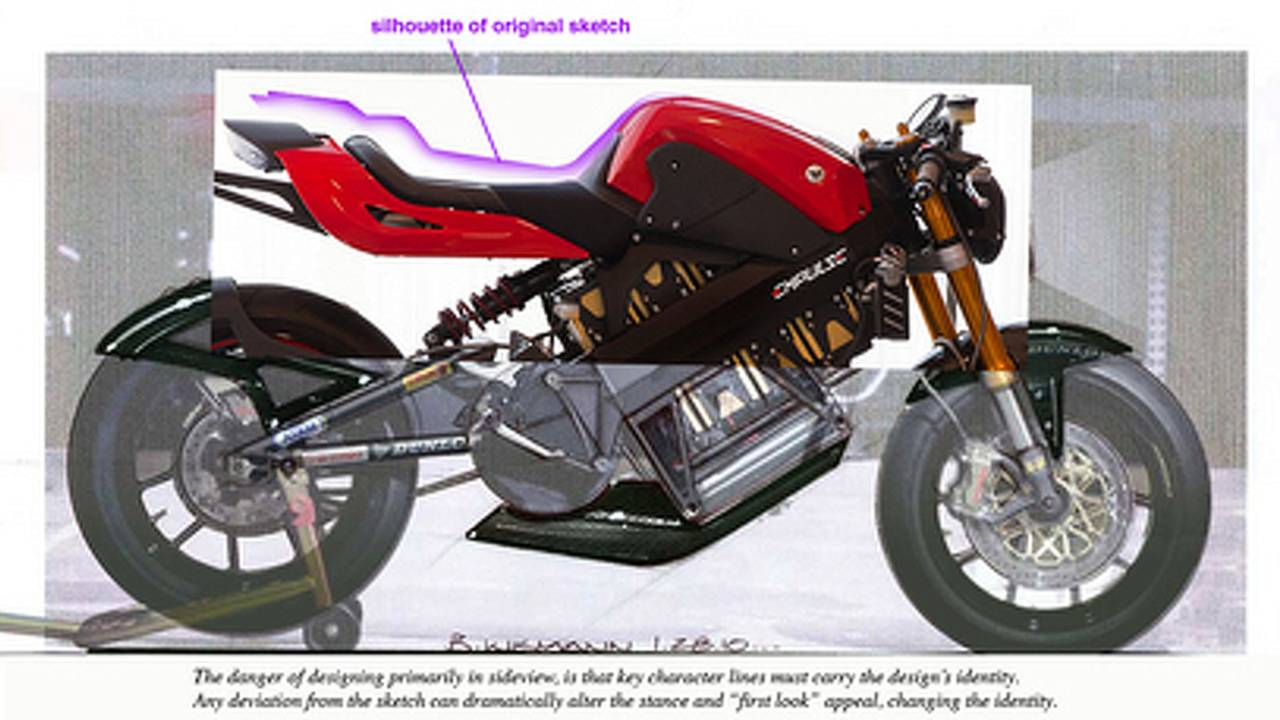 With the launch of the It makes no attempt to hide its batteries like the A tank is the center piece of all motorcycle design.  It is visible in both plan and elevation, often both at the same time, from standing still and from the rider view.  The rider touches it constantly with the most sensitive and intimate parts of their b...

With the launch of the

It makes no attempt to hide its batteries like the

A tank is the center piece of all motorcycle design.  It is visible in both plan and elevation, often both at the same time, from standing still and from the rider view.  The rider touches it constantly with the most sensitive and intimate parts of their body, using its surfaces to pressure and guide the motorcycle through turns and to balance.  Every part of a motorcycle's style and shape converges at this central point, from every view. In the case of a naked roadster like this one, it also forms the largest styling component.  A bold tank need not be complicated, but it does need to communicate man-machine interaction, more than originality.  The total profile of the complete motorcycle delivers the unique brand message, the details should only reenforce them.

The tail is original too, and apparently ergonomic.  Its general side view is like an XR750 dirt tracker, the most successful American racing motorcycle of all time, an excellent theme to start with.  But here too the design is short of convincing.  Compared to the short, vertically stacked, boxy tank, the tail looks like it came from a different bike.  The bid for originality in the back end disappears with the anonymous upside down half moon brake light seen on millions of machines since the first BMW F650 in 1993.

Finally, several of the details need further integration.  The knee pads are random enough that they appear to act like covers, as though hiding something.  Whether they are or not as important as why they look like flat plates in an area so critical to man-machine interaction.  They, like most of the plastics lack a strong 3 dimensionality, almost as though the whole machine was designed in strict side views or by a CAD jockey with limited time or resources.

Although I am mildly flattered that Brammo chose the MT-03 headlight for this first prototype, I do hope that the final production unit carries with it some of the mechanical purity of the frame/battery/propulsion unit, perhaps using the triangular battery supports as inspiration for the headlight brackets.

If it appears that I am overly critical, it should be noted that it is because the total effort the Empulse represents is so great, so unexpected and so far above the electric motorcycle pack that it really needs only another 10% to be considered on par with the major OEMs.  This little company has now demonstrated its ability to manufacture and survive.  If it can deliver the Empulse as promised, with some further refinement, then Brammo will have punched well and truly far above its weight.

At long last, an electric motorcycle design that is proud.  It does not hide behind plastic or excuse itself for being what it is.  It stands alone as the first honest attempt to create a new electric motorcycle design aesthetic, without resorting to cliches, looking like a plastic box full of Duracells or being so wildly weird that it won't be accepted by that most notorious bunch of conservative tribes : motorcyclists.

Michael Uhlarik is the designer of the Yamaha MT-03 and 2003 Yamaha M1 and works as an industry consultant.