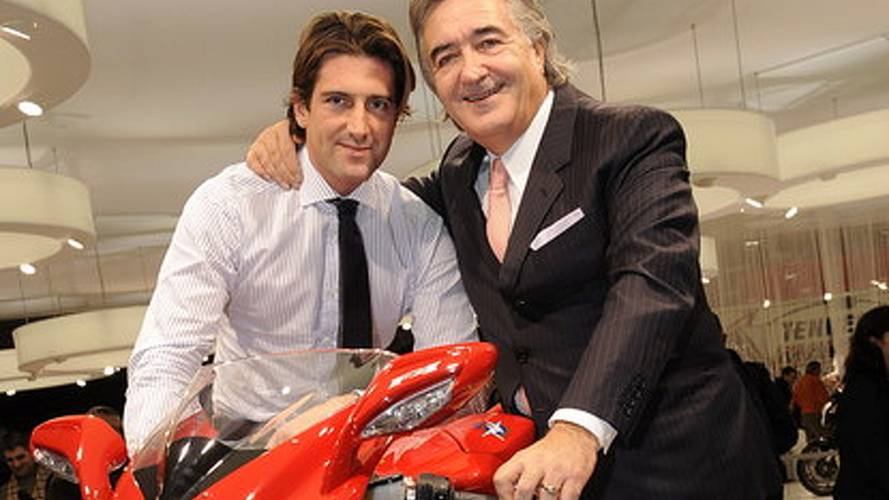 Claudio Castiglioni (right) and his brother Giovanni are back in charge of MV Agusta.

"MV Agusta is the crown jewel of Italian motorcycles, I am thrilled to have completed this transaction." No wonder Claudio Castiglioni is thrilled. Two years after selling MV Agusta to Harley-Davidson for 70 million euros, they pay him 20 million euros to take it back. Castiglioni immediately promises new models and a bright future for the iconic brands, but MV Agusta's Castiglioni years suggests we should expect more cunning business deals than actual motorcycle manufacturing.

1991: Cagiva (Castiglioni's family business and owners of the Cagiva, Ducati, Husqvarna and Moto Morini brands) bought MV Agusta - at this point just a brand and a few historical bikes.

1995: After selling Ducati (and Moto Morini) to Texas Pacific Group, Castiglioni re-invested the money in ressurrecting the MV Agusta brand. During this period the company was restructured and changed name from Cagiva to MV Agusta.

2001: MV Agusta is drowning in debts. Castiglioni reportedly tries to sell a 20% share to Piaggio, but no deal is done.

2002: Unable to pay its debts, MV Agusta is put under temporary receivership.

2004: MV Agusta is saved from bankruptcy. "Proton have believed in the value and potentials of our brands, and with we will construct a leading force to be reckoned with on an international level", said Castiglioni in the press release announcing that the state owned Malaysian car maker was buying a 57,7% share in MV Agusta for 70 million euros. Castiglioni kept a 37,25% share, Massimo Tamburini 2% and Electrolux, former owners of then Swedish brand Husqvarna, 3%.
Being the majority share holder, Proton also took over MV Agusta's massive debts of 107 million euros. It's unclear (the whole Proton shenanigans are clouded in Malaysian politics) how much they invested in MV Agusta during their ownership, but it's safe to say they took a huge loss on their Italian adventure.

2006: A new leadership takes over Proton and promptly decides to cut their losses and sell their share in MV Agusta to an Italian investment group called Gevi Spa (acting as a front for Castiglioni) for one euro.

2007: MV Agusta sells Husqvarna to BMW for an undisclosed fee, believed to be around 90 million euros. Gevi Spa isn't mentioned in the deal, with BMW apparantly buying the company from Castiglioni owned MV Agusta Spa. "This transaction has been carried out in order to expand MV Agusta and Cagiva presence in the international markets having more financial resources for new models development," Castiglioni explained in the press release.

What next: Castiglioni has brought in his old friend Massimo Bordi from the Ducati 916-era to run MV Agusta, hoping to recreate the glory days: "I have already won once together with Massimo Bordi, we made the most beautiful bikes in the world and we will continue with this tradition".

That's 15 years, countless millions of dollars, amazingly few motorcycles and a handful of creative business deals ago, but best of luck anyway.