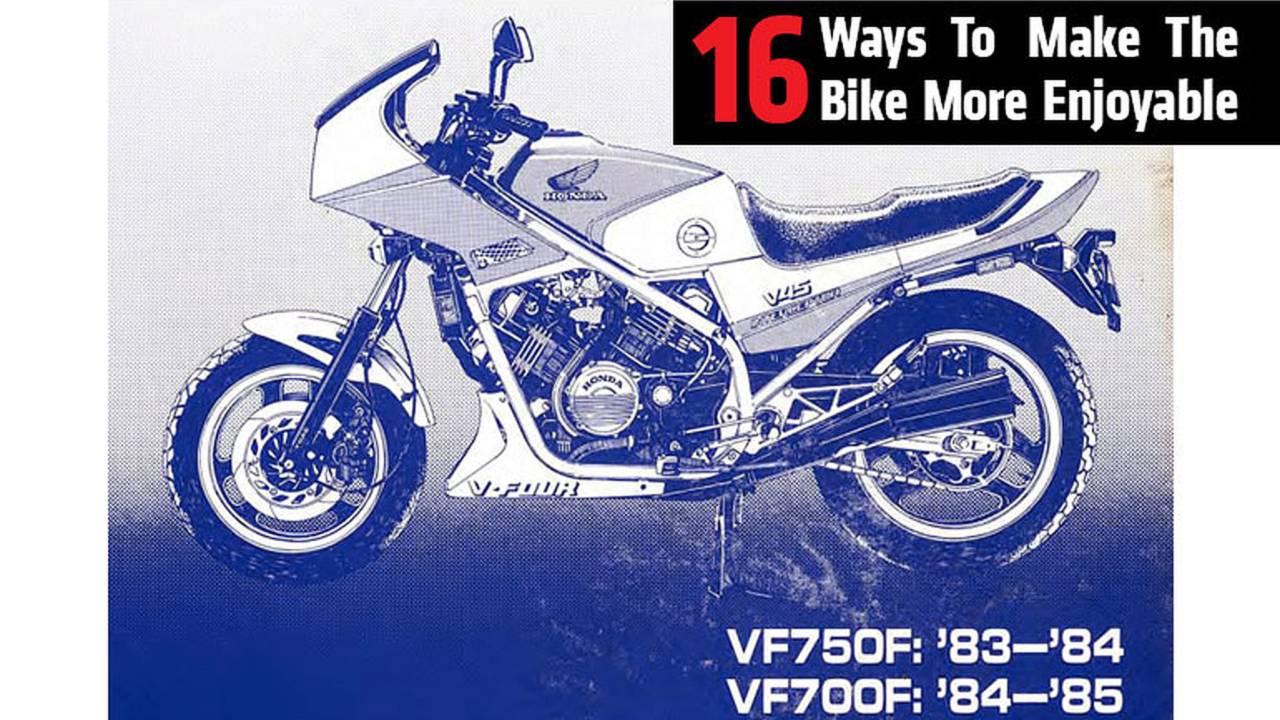 Bikes seemed to have lost some of their innovation in favor for customization appeal. Here are 16 ways to make the bike a more enjoyable experience from the showroom.

What happened to innovation in bike design? Why aren't modern technological amenities standard features? Where did the breakthrough design features go? Here are 16 ways to make the bike more enjoyable.

I remember being delighted by my first motorcycle, a 1984 Honda Interceptor VF700F my father gave to me. Its V-4 engine would fire it down the road at a terrific rate, and it cost next to nothing to run. The bike was surprisingly well-appointed, too. My 16-year-old self took that last part for granted, but as I ride more motorcycles, I find myself longing for many of the features that old bike had. The Honda engineers put great thought into making the ownership experience a good one, instead of focusing only on ways to move inventory off the showroom floor. The bike was so convenient and a real pleasure to live with.

At the beginning of this year, I wondered what a motorcycle manufacturer's New Year's resolutions might sound like, if the manufacturer were to focus on making bikes enjoyable to own by eliminating common frustrations. What follows is a list of useful features I'd like to see on every road going motorcycle that's on sale today, and an explanation of, or reasoning for, each. From now on, every motorcycle will have the following things:

Next to the seat and above the left exhaust, the Interceptor had a “Helmet Holder”—a glorified padlock that was operated by the same key as the ignition and fuel cap. The Helmet Holder answered the question of what to do with your helmet after parking your motorcycle, and took all of two seconds to use. It also made it easier to give people rides, since you could carry a spare helmet wherever you went.

The steering could be locked in either direction—either fully left or fully right. It's good to have this option; parked with their rear wheels to the curb, bikes are sometimes happier with their bars locked to the right.

The Interceptor had under seat storage (and an emission control information label). It was enough for the factory toolkit and one of the following: a storage net, a lock, a pair of gloves, or a sandwich.

Useful for obvious reasons. While it is wonderful to have a lady friend hold on tight, if a good buddy happened to replace said lady friend it's nice to know he has something to hold on to besides your love handles.

Too many bikes have flimsy mirror mounts that get blown out of position at top speed. The Interceptor's mirror arms were made completely of metal and held fast at speed.

Including reserve, the Interceptor carried a full 5.8 gallons of fuel, which puts the bike's range over 200 miles, even when ridden aggressively.

Have any production cars ever come with just a low fuel warning light? I love to run out of gas as much as anyone, but why should we be forced to relegate the bike's trip meter to fuel gauge duty? I should know how much fuel is in my tank the moment I fill it up and whenever I park it in my garage until the next weekend ride.

Cell phones have terrible battery life, motorcycles have alternators. It's a pity that every motorcycle today doesn't come with a way to charge a phone.

ABS (with a caveat):

Various reports have proven the benefit of ABS in reducing crashes, but since we're talking about New Year's resolutions, let's make it so the rear ABS can be disabled independently, and make sure the system allows stoppies too.

DCT bikes and bikes with slipper clutches can be hard to bump start. Easy bump starts are one of the benefits of riding a motorcycle—let's not forget it.

Any motorcycle without true racing aspirations deserves a center-stand. With one, it is much easier to work on either end of the bike. They're heavy, so let's make it easily removable.

Riding along a dark country road at night is one of the most enjoyable, surreal experiences to be had on a motorcycle. It's fun to follow a patch of light over crests and around corners at great speed, but even more fun, not to mention even more safety, can be had if the patch is bigger and brighter.

Think about the parameters a bicyclist can manipulate in his quest for perfect fit—frame size, seat height and longitudinal position, stem reach and rise, handlebar width, and crank arm length. Seat height and stem rise, at least, are just a twirl of a wrench away. It would be nice to see at least two fit-centric adjustments on motorcycles—foot peg height and handlebar height.

I use a combination of hand signals and turn signals to alert fellow road users of my intentions, but from time to time I forget to cancel my turn signals.

Once you ride with heated grips you'll wonder how you ever got along without them. They're just a switch, a resistor, and two heating elements, and they belong on every bike.

A handsome visual interface is a big plus. Nice needles and an appropriate font go a long way, even a clock would be a welcomed addition.

It is possible to enjoy a bare-bones bike simply because riding is such fun. However, once you've lived with a pleasantly practical bike it is hard not to get frustrated when you ride one that's been built without you in mind.

Look at that picture.  He's got under seat storage, a helmet lock, passenger grab rails, adjustable suspension, mirror that stay put, a fuel gauge, and a 5.8 gallon gas tank. USB hasn't been invented, and won't be for another 13 years.

What do you think every bike should possess as a standard feature?