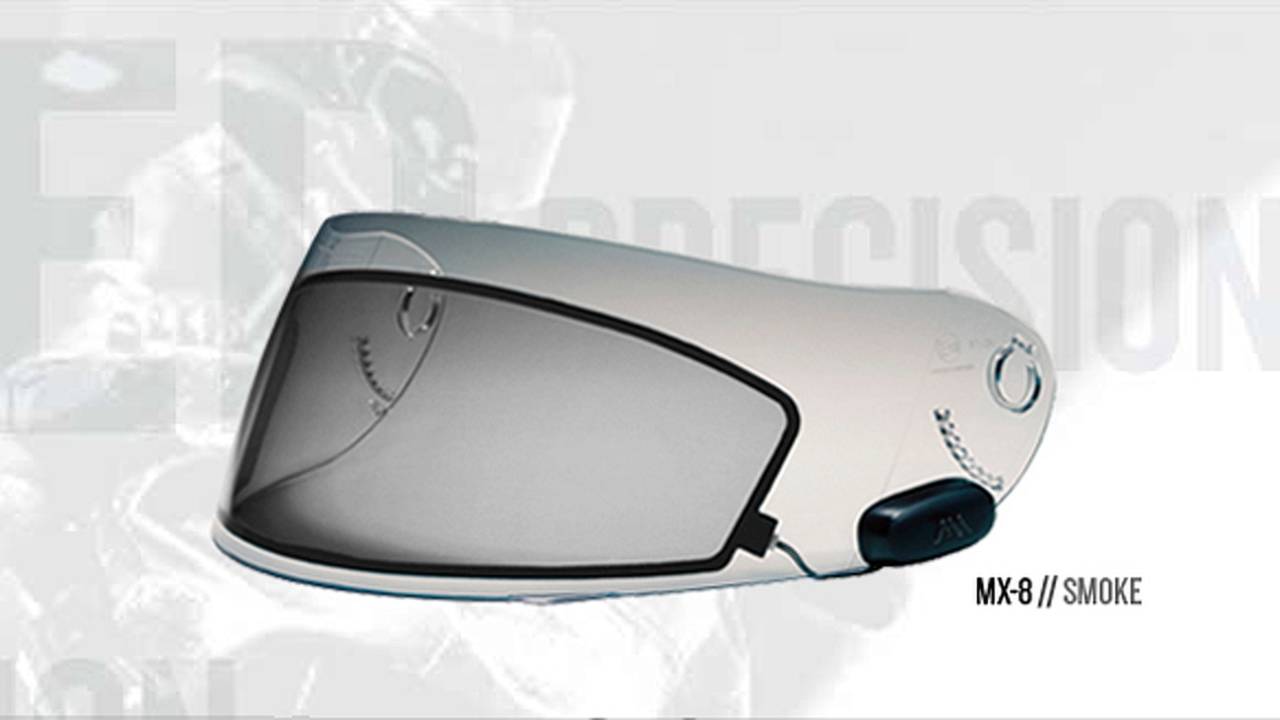 Here's hoping someone picks this tech up and makes something of it.

Joining Bell and Fog City in the whiz-bang visor game is e-Tint with their MX-8 and AX-9 visor inserts. Both use electricity to instantly transition from clear to tint, either at the push of button or using a light sensor.

The MX-8 (which is shaped for full-face visors, not MX goggles) retails for $130, goes from clear to black or blue, depending on which color you buy, instantly at the push of a button. The AX-9, which is available only in black, transitions automatically (and retains the option of manual operation) and costs $150.

While this is its first appearance in a motorcycle application, powered LCD tint technology has been around for a while. First used for air-force pilots, it found its way into domestic applications (in the form of SwitchLite Privacy glass) and even made an appearance in the automotive world when Mercedes used it in the roof of its Maybach 62 luxury barge. For 2012, they're also putting it in the roof of the SLK and calling it Magic Sky Control, which is Mercedes way of saying that they heard you liked convertibles, so they put a pseudo-convertible in your convertible, dawg.

It works by putting a liquid crystals between two conductive layers and then applying electricity to activate them. In the case of these inserts, that electricity is stored in a battery pack that you attach to your visor, on the outside in the case of the MX-8 and centered down low on the AX-9. Both batteries recharge via USB. e-Tint also says that its inserts have an anti-fog coating on both sides. The inserts are installed basically like a big sticker on the inside of your visor (or like a Fog City insert). Line up the plastic sheet with the cross-hairs on the outside of your visor, remove the backing material from the insert, line things up just right and finally press it into place.

The $120 Bell Transitions visor is cheaper than both e-Tint options and works great if you're a wearer of Bell helmets. Fog City inserts can be had for under $40 and work automatically on the same principle as the Bell, but instead of a black tint, they're blue. Both react to UV light and take a few seconds to go from clear to tinted. Neither require a battery and neither get especially dark. The e-Tint insert is more of a novelty at this point, but if this tech was designed into a helmet in the development stages, I can see how it would be pretty amazing. The battery could be taken off the visor and put somewhere like the chinbar and the electrical contacts could be integrated into the visor mounting system. There would be no hard borders to get in the way of your vision or bright light coming in around the edges.