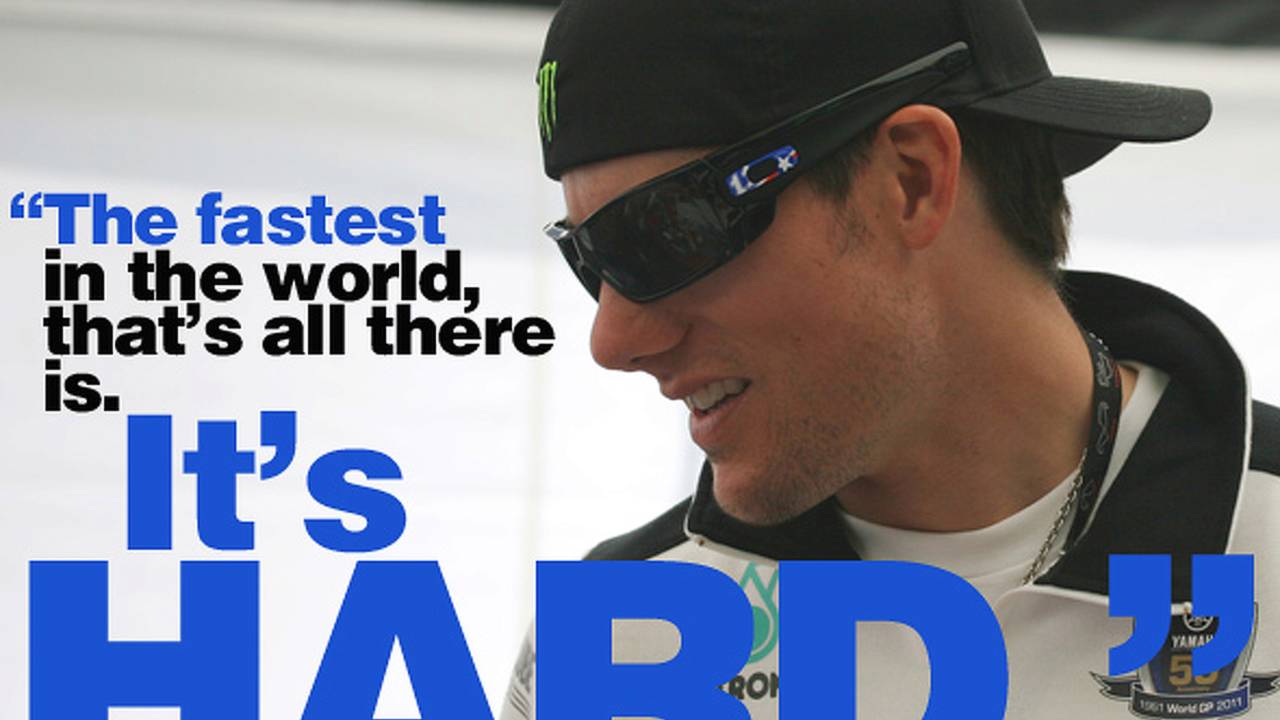 On Friday afternoon I sat down with Ben Spies and asked him about food, music, celebrity life and motorcycles. He'd had a few minutes to get cleaned up after coming off the track, but his mind was as occupied as you would expect. With a race two days away, a MotoGP rider needs to focus on lap times and bike setup, not journalists he's never heard of. Still, he was polite and gave me my fifteen min...

On Friday afternoon I sat down with Ben Spies and asked him about food, music, celebrity life and motorcycles. He'd had a few minutes to get cleaned up after coming off the track, but his mind was as occupied as you would expect. With a race two days away, a MotoGP rider needs to focus on lap times and bike setup, not journalists he's never heard of. Still, he was polite and gave me my fifteen minutes. I'd have loved to talk bike setup, lines and racing stuff, but I knew better than to try and pry secrets out of him. Instead I tried to get an idea of what Ben's life is like.

Back in AMA you did really amazing. World Superbike for that one year was fucking nuts. Just how different is the level of competition in MotoGP? And how different are the bikes?

"Well, I mean, it's like with anything. If you compare it to swimming, running, cycling, anything, it's the fastest guys in the world. I mean that's all there is to it. It's hard. And it's fun. But it's also...when you have that little bit of a bad day, like in AMA if I had a little bit of a bad day or a bad race, I knew second place was still... you know, we would have second place. World Superbike the same thing; maybe not second place but always a good finish. If you have a bad day here you're back in fourteenth. So it's uh, very...the level of competition is the elite for sure. Also, coming from World Superbike and AMA, you know, we've won races and we've had good positions in MotoGP but we didn't have a win, and then when I won in Assen it confirmed at least, personally, for my mind and my head, that maybe not as much as some other people but when the bike's right and I'm riding good that winning is possible and that answers a lot of questions and takes a lot of pressure off too, after the first win.

How is the bike? Do you have the same parts as Lorenzo?

Yeah, we all have the same stuff, the factory guys. And a lot of what MotoGP is, you know, the riders, the top eight riders, all have the talent. It's the getting the bike working good and then the confidence in the bike. It's all in the head and confidence. You've also got to be able to, on that bad day, that next morning, wake up and clear your head and throw out the day before if you want to get back straight. It's ruthless, you know. These guys, they don't slow down. So it's...you've got to be on your A game for sure.

What is your day to day life like? At the track?

This morning, this is different, I have a lot of friends at this track. But normally, we go out at ten in the morning. I wake up at 7:45, coffee, breakfast.

"Um, it depends on the days. Saturday is a bit different than Sunday with the workloads and stuff. Sometimes breakfast is more, sometimes, like Sunday morning, the breakfast is very small because we only have the 20 minute warmup, but then I have a very big plate of pasta for the lunch. Saturday I'll eat a little bit more than I would because we have an hour long qualifying session instead of 45 minutes and the intensity is much more on the body. You always want to eat enough where you have the energy but you also don't want to get on the bike heavy. Snacking is more important than having big meals. You know, having five meals a day is better. Some riders are completely different; I'm more on the "I don't mix many carbs and proteins together ." I like to have a lot of one at a meal, and then Saturday night before a race I'll actually have pasta and protein because you want to be topped off."

Have you ever read Kenny Robert's Techniques of Motocycle Road Racing?

What you're saying is very similar to what is written in there.

Okay, so off the track, like in the off season, what do you do?

"It changes. Between the first month or two off for the season where I'd go to Starbucks and get just the espresso or americano with nothing else in it, when I go home for a month I'll have a vanilla latte and things like that. Just not worry so much. And then when I start dieting to get back to race weight for the season, that's when you start having only coffee with no milk and when you have a pasta, it's pasta with a little bit of parmesan cheese and no oil. But you can also... there's a way where you can eat a good amount of food but just keep it as clean as possible. It definitely varies. Like right now I'm at my lowest weight for the season, where now I can eat a little bit more and not worry so much about it. Like I said, it always varies. And how much working out I'm doing, all that kind of stuff. It just varies."

"Having a trainer, for me, is very important. You know when I'm on a diet he'll say, you know, I only get to eat this amount of food. And when, like right now, for lunch I had a plate of pasta and he brought me another half plate because he said you need more so it's good to have somebody that overlooks because as a racer when you're at that level as soon as you start going on a diet you take it to the extreme and when you get to a point you always want to push the barrier and push it more and more but you have to have somebody looking over you. A good example totally opposite of racing is when Christian Bale did "The Machinist" movie when he lost so much weight. He lost the weight they wanted him to for the movie but then he was so into it he decided I'm going to push my body as far as I can. So, that's what I mean when I talk about the diet and how important it is to have somebody overlooking because sometimes you can go too much and then a week later you're eating cakes and stuff because you're went too much. So it's, uh, pretty funny actually."

So when you go to Starbucks in the off season do people come up to you and go, like, "Oh my god, you're Ben Spies!" Does that happen?

"You know, in America, it's a little bit more than it used to be, but in America motorcycle road racing is not NASCAR. But when I go to Europe it's definitely, it's..."

"For sure. And in Italy, because I have the house in Italy so I live there quite a bit, and they definitely do. But in America it's getting more and more but I can go a week with nobody noticing me. But when I go to Italy every time I'm sitting down I have people taking pictures you know while I'm eating and stuff like that."

You said you have a house in Italy. Do you speak Italian at all?

"I know a lot of words. I can't speak it. But if there's a couple of Italians having a conversation I can usually understand what they're talking about and I'll catch every other word, so they can't get by too much without me knowing what's going on."

Is that annoying? How is it?

"For me it's not annoying, it's just different, because I'm just shy, and I, not so much shy, but around big groups of people I don't know I'm kind of a little more calm and not as flamboyant I guess, so for me when I started getting a big fan base in Europe it was a big shock to me. But I've coped with it well and learned how to deal with it and it's okay."

Do you ride on the street ever?

"Yeah, nothing against it. We take it so far to the extreme here that when I go home, you know, you either motocross or you do your training and you relax a little bit and I have a supermotard that I ride a little bit and I'll ride it up and go have coffee and stuff like that but not a whole lot."

What do you think of motorcycling racing? As a job? Or something more than that?

"There's sometimes where, you know, it is a job. And I hate to say it but it can be, not a drag, but when you, a lot of people don't realize that it's glitz and glamor sometimes and the majority is, I mean, I love it. I wouldn't want to be sitting behind a desk doing anything. But what people don't see is, like when we raced in Germany last Sunday, we get to the hotel at midnight and go to sleep, we'll wake up at four in the morning, which is eight o'clock LA time or whatever, and then you fly to LA We landed at twelve, I had a PR meeting until four in the afternoon, then I had another PR event from eight until eleven. So jetlag, I go to sleep at midnight."

Ben with Adey at that PR event.

During the racing season you kind of get shuttled around? Do this? Do that?

So your diet is real strict. I'm assuming no cigarettes, no alcohol, none of that kind of stuff?

"Ah, you know, I'll drink alcohol. Double whiskey on the rocks. No calories."

"I'm not against alcohol. I'm not a big partier and I'm not going to go get smashed, but when I do, you know, I'll have a drink a couple nights a week no problem. But it's not a Guinness, you know?"

"Honestly, it's kind of scary if someone got in my iPod and saw what I have. I mean..."

What are the scary parts?

"I would have to say...well...eighties, seventies, rap music, country music. I have a Kenny G song in there. An Elton John album. Stevie Nicks. I've got everything. I'm a big music person. I have a lot of respect for music."

Do you play music?

"No. I wish I could. And I wish I could sing, but I can't. But it's important when you're traveling on planes to be able to listen to music and actually enjoy mellow music and things like that. So I definitely like my music, and have quite a bit of it. But I'll listen to rap music, rock music and how my race weekend goes, or whatever mood I'm in, will depend on what I'm listening to before start. There can be stuff where it's mellow music because I'm in a good calm, everything's going good, and then there's some music where I'll have to throw some Disturbed on if I've got to get pissed off to go fast so it all depends."

Well, I think I've got to wrap this up here, but nice talking to you and I hope you do well.