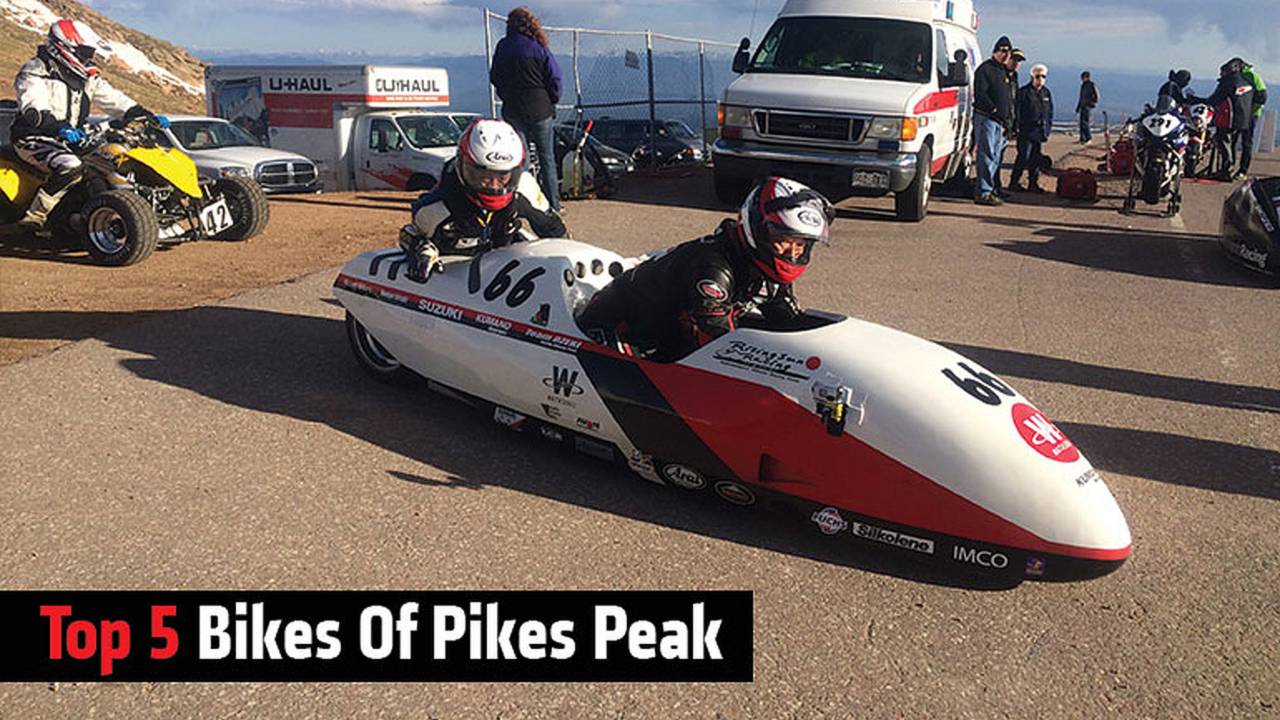 Pikes Peak isn't just about four wheels so we decided to pick out our favorite top 5 bikes from this years ascent into the clouds.

Pikes Peak isn't just a battle ground for four-wheeled vehicles it's now a a new 14,000 ft. ascent for two-wheeled gladiators to duke it out. We roamed the pits and found five bikes we just had to share.

This famed GP, Wilson Performance-tuned Rattler Quad has been around for a few years and still remains too impressive to ignore. This bare-bones monster is powered by a 510cc two-stroke Yamaha Banshee engine and, according to Bill, it's producing somewhere in the neighborhood of 150hp.

Wilson and Ell are as close to an old school, grass roots level MotoGP team as you'll find today. They rely on Ell's experience to read the machine and the mountain conditions.

We asked why they aren’t running full racing slicks on such a clear, hot day."Weight. We save four or five pounds per tire since the slicks have such a thicker casing. And feel these things,” he reaches down to Ell’s tires. “They’re like gum and we’re not even running the softest compound.”

The smell of that Dumonde Tech Racing Castor in the air brings back memories of those epic battles between Agostini, Sheen, Roberts and Spencer in the 500cc GP World Championship.

Sidecars are not for the faint of heart, but the crazy and trusting. This screaming Suzuki-powered rocket could be heard echoing up the mountain from Glen Cove to the Summit. It was exciting to watch Yoshida climb around the machine that close to the edge, corner after corner, in an effort to keep it on at least two wheels at all times. PPIHC is one of the few places in the US that you can watch sidecars of International caliber make a run at a heart-stopping record.

There’s something about an electric motorcycle that’s magnetic—pun intended. Piloted by road racing veteran Jeremiah Johnson and supported by a mostly volunteer team (Chris Bell, Sophon Johnson, Rob Hedden, Joe Robinson, Gene Seymore, Curtis Owen and Frank Mitchell) the machine had an orbiting crowd wherever it parked, both at the Fanfest downtown and in the pits. The stickers and vintage pinup poster livery didn’t hurt either.

From the bulletproof, riveted Army / Owl paint job and the AH-64 Apache helicopter style fan outlets, to the general attention to detail of the controls and gauges, this thing just screams (not literally) military-jet cool.

Too bad they chose that familiar car alarm sound for mandated noise generation – our only complaint. The whine of that 175ft/lb torque-monster is just too awesome to have to drown out, but rules are rules. Just a suggestion for next year: contact Intel or another tech giant to develop a more race appropriate, synthetic sound.

The machine, which makes the equivalent of 100 hp, is still being refined for production and a bit down on performance come race day. That didn’t prevent it from passing a few gasoline powered bikes during practice and ultimately winning its class.

We spoke to Chris Bell, bike builder and mechanic, who was quick to give credit to the many people who volunteered their time and effort in this race. Make no mistake. Electrics aren’t going anywhere and perhaps in the future someone will invest as much in an electric motorcycle campaign as Peugeot did for Sebastian Loeb’s 8:13 record. Elon Musk, are you out there? Can you give these guys a call, please?

As a whole, Paul Livingston’s Ducati team is clearly the best prepared and most talented group on the mountain

every year, yet victory seems to eluded them again. Still, having Ducati’s place 2nd, 3rd, 4th, 5th and 8th says a lot about their capability and versatility on this mountain. The sound of the Multistrada is like no other, powerful, distinct and recognizable. The front wheel lifts under acceleration off the start, out of corners and easily into third gear.

Both Ducati riders said they felt like they were either low on tire pressure or getting a flat on certain sections of the course during the race. It was not like that during any of the practice sessions. What caused it is anyone’s guess. Some described the course as “greasy” losing traction on both the front and rear wheels several times. It could have been the wind and fine dust that filled the air, anti-freeze or oil from spectator traffic, the sun and heat, who knows?

I asked Paul about any major modifications to the Multi and he responded by putting us to work. So we grabbed two stands from the back of the truck and helped wave Mickey and Don in at the finish. The man is good. We were happy to be of assistance just to be close to the machines.

When a motorcycle bears the name of the race it’s in, pay attention. This 150-plus hp, four-in-a-row PPIHC winner on both the mixed pavement/dirt course saw Greg Tracy’s foot-down Supermoto style and the first year of a newly paved course with Carlin Dunne’s knee-down road race style.

Mechanics: Guy Martin (still checking on the names of two others with him)

Placed Silver in more IOM TT events and classes than we can count. Wickedly fast.

The PPIHC Über GSXR famed #8 machine we’d all been waiting to see. The bike Guy built. We don’t care if he placed 1st or 101st, there are beautiful stainless and titanium welds and tubes and brackets and pop valves that make it a visual delight.

Where to start? The adjustable headstock? The frame-integrated plenum chamber? Nothing is duplicated, everything is unique. Rumors were this 320hp beast would be capable of 500 on race day. Who in their right mind could even ride? Anyone who has heard (and can understand) Guy knows he is not in his right mind.

The hand made, custom black and gunmetal gray tank and rear section pop off in a matter of seconds revealing a bare bones machine that was made for one purpose. Do for the Pikes Peak Challenge - UTV/Exhibition motorcycles class what Sebastian Loeb did with his Peugeot 208 T16 Pikes Peak last year. Not just beat the record. No. Guy came to shatter the record.

But, the mountain is fickle; test and practice times are extremely limited and condition vary widely over three sections during the 2am-9am Tuesday-Friday time slots. In the end, he won his class, but fell short of his goal.